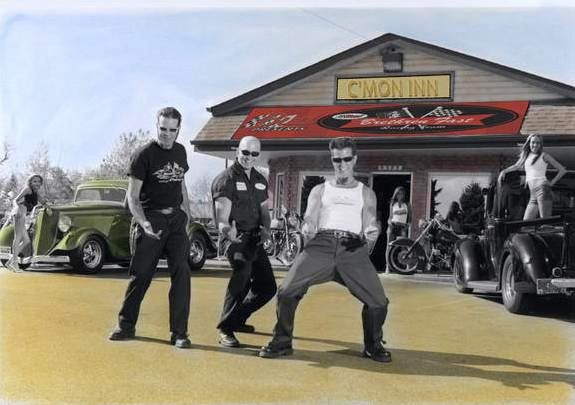 You put out an album called 500 Laps Of Beer Drinking Fun and people are going to start thinking you like the stuff. Mik (bass), Don (guitar) and Nate (drums) make up the Brethren Fast Racing Team, purveyors of what the boys like to call Electrified Hillbilly Funk, which sound like a hell of a cocktail to me.

First drink:
Nate: Five years old. I was in a parking lot with my step dad in North Carolina. He was going to teach me how to drive but instead taught me how to drink. I’ve been on a steady diet of beer ever since.
Mik: I was ten. I was at my brother Dino’s graduation party from high school. It was a Salty Dog, or a Greyhound if you will. That was also my first encounter with women. I was only waist high to an adult and since I was drunk I kept swaggering into the crotches of cute girls and wound up with a boner.
Don: Seven year old. Same party. People kept getting in and out of the pool and leaving their drinks behind. I drank anything and everything left in a glass that I could get my hands on. I tried to drink the pool but it was too big.

The Usual:
Nate: Bud Lite.
Don: In the winter—Budweiser in a can. Summer—Budweiser in a bottle.
Mik: Bud Spritzer—Get a glass of ice. Pour a Budweiser in real slow. When it foams up, give it a little squeeze of lime (the lime has vitamin C in it, prevents hangovers).

Drunkest gig ever:
Don: We were in New Orleans in the middle of an eight week tour. Since we were down south we drank beer for breakfast every day. We were supposed to go on at 4am at this club in New Orleans. We decided to show up at 10pm and found the bar empty except for the bartender and the band onstage. Our pay was 50% of the bar sales. This drove us to drink with a true sense of purpose. By the time we went on we were only able to slobber on each other. It was all we could do to stand up. Only on the road, my friends, only on the road.

Your local:
The Rustic Tavern on 29th and Sheridan. Where a man feels like a king and a king feels like some sort of kooky super king.

Favorite bar on the road:
Any one that sells liquor. More specifically—the Crooker Creek Saloon in Frasier, CO. It’s got a Velvet Elvis.

You’ve got 20 bucks:
Mik: We’d go to a local mountain bar where we know all the bartenders. Spend ten, tip the rest.