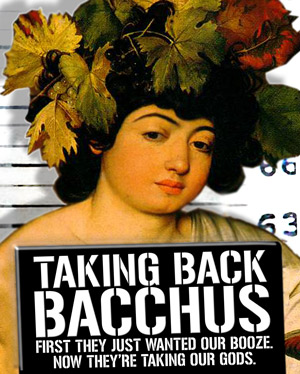 Our lives are rooted in context.

Our beguilingly adaptive brains make us situational beings. A joke is funny today that wouldn’t be tomorrow or yesterday. Remarks or actions offend, sadden, or enrage us this morning, yet we might easily ignore them tomorrow night. Everything depends upon who, what, where, and when. This isn’t to claim our deepest convictions guide us only so far as the whimsy of the moment will allow. No, we succumb to context most fully while collating and quantifying the moment-by-moment anxieties and joys of our ongoing internal biographies. Life, as someone once said, is what you make of it, and the making hinges on the situational nature of incoming information.

All that said, here’s some fucking granite-hard context for you:
I’ve been secluded too long in the spicy dampness of the Keg Bottom. Down here, the noises of the squeakiest wheels are muted, and thus I missed yet another neo-prohibitionist misdeed. My Keg-Bottom filters allowed thievery to transpire right under my brandy-sniffing nose.

Here’s the thing. Not content to ruin our lives, the prohibitionist movement is stealing our words. Specifically, they have purloined one of THE words.

Those all-too-common safe-aholics, those sameness junkies, those blithering mouthpieces of stultifying equilibrium, have violated the word Bacchus. They have kidnapped a vertebra from the Spine of Intoxicated History, spirited it away to their fusty lair, and tortured it into a new and horrible definition.

Bacchus, just in case, was the Roman god of wine. He was a robust, ribald, randy, let’s-party-until-the-cows-come-home-then-let’s-party-with-them kind of god. He stood for for getting hammered anytime, all the time, and every time.

Who do these people — these children — imagine themselves to be? Where is their grit and individuality? Where, in the length and breadth of the galaxy, did they run afoul of a malignant Idea Dispenser (fetid little Pez candies with fangs and acne and lederhosen) and become infected with the idea that their frumpy, white-bread, anti-progressive thievery was in aid of anything?

What, finally, has short-circuited the minds of our college students? 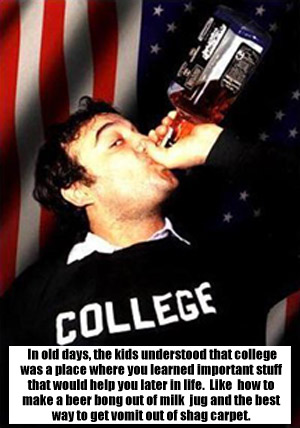 For as long as education has existed as a formal practice, students — young, fearless, and champing at the bit to define themselves and the world — have been the ones who illuminate the darkness, retune the national receiver, shout the words that must be shouted, and rip the Sameness Binders from the eyes of Prevalent Opinion. Students tackle old thought and make it say uncle. They sit in the Dean’s office and refuse to leave until the goofy old piker agrees to get a grip. Students open history’s chest, look into its heart, and dislodge the toxic blockage there – that bleak, hot tumor that radiates the cancerous fire of false bliss and obnoxious cultural mores.

Only in the most hard-nosed sense is college about “getting an education.” Among the vast number of graduates each year only a vanishing small percentage escape the Ivied Halls in possession of anything even remotely like knowledge. The remainder use their stint in the Sheepskin Corps as an opportunity to achieve something larger than book learnin’. They seek out, then wallow in, the possibilities of the Self. They begin to recognize their limits, and the extent to which those boundaries can be prodded, poked, and otherwise scanned for cracks. You do not achieve intelligence (or even a decent level its forebear, curiosity) via a four-year immersion in term papers and seminars. Knowledge is a life-long process, and college generally comes too early in one’s life to be practical. Until you know a bit about who you are, the acquisition of supplemental facts is rather like playing Monopoly by bartering livestock.

Students ought to be concerned with something more epic than creating pretentious acronyms, and goose-stepping in fealty to Empire of Their Upbringing. Carrying the attitudes of your parents’ generation onto a college campus amounts to little more than a declaration of your subservience to What Was, and will eventually power the CPU governing your Android Future. It’s a waste of an opportunity. The crystal ball shows cubicles, potlucks, performance appraisals, trophy wives, spoiled and spineless offspring, and a five-day-a-week Jerry Springer habit. The whole of the American educational system, K-12, is already arranged to instill a Love for the Ordinary in its charges. Why help it? Why ruminate with the herd before you even figure out whether you are carnivorous, herbivorous, or both?

I know, I know…BACCHUS has some noble goals. We are regularly slapped about the face and neck with details of the latest drunken outrage committed on some university campus. Rape, debauchery, rioting, fisticuffs, and actions contributing to the delinquency of goats, seem par for the course. Young women travel in groups to avoid molestation, or worse. Prior to “hooking up,” each party to the intercourse fills out a sheaf of forms to verify mutual, real, desire. Tenured professors, gelatinous fraidy-cats with elbow patches and jug-scotch breath, have the gall to tell students that everything has already been said, so they needn’t bother trying. Football players get liquored up and rampage through the streets spewing C-minus cliches and the strangled gurgle of a Literature 101 mind spring.

Perhaps these things are worthy of anger and action. Without a doubt, fear of rape is detrimental to discovering who you are. And no one should have to participate in a football riot unless they think it might be a hoot (Hey, the opportunity to topple a police cruiser is rare, so take advantage while you can). So, we can grant a level of nobility to BACCHUS’s desire to educate students on the potential badness (second-party badness, actually) that can unexpectedly pee in the corn flakes of a good revel.

One of BACCHUS’s secondary goals centers on educating students about the negative impact booze can have on health. It is here that they hurl themselves over the line. This goal is not noble, it is single-celled fascism from kids who can barely control their own hormones, let alone derive campus policy. Clinton’s brunette codpiece was way more noble than this goofy shit. At least a hummer is natural. No, it is one thing to be against rape and rage — violence done by one to another — and quite another thing to hector individuals about what they put in their stomachs.

In the first place, studies have proven, over and over again, that tippling (unless you are a case-a-day couch slug who has lost his will to live) is good for you. Good, as in healthy, and that’s the AMA talking. Or, ask a person on the street. Ask him or her to define the good things about “raising the wrist.” You’ll likely hear that booze is relaxing, comforting, has an ability to draw someone out of a shell, that it loosens people up, makes life funny, makes life light, and causes sudden outbreaks of real joy. In a world more rife with fear and rage than an insurance lobby trophy case is rife with senatorial genitalia, why shun a substance that can, even if only briefly, drop a 16-ton Monty Python weight on our ill feelings? Even more to the point, why push for the death of a behavior that you lack the fortitude to engage in the first place?

To make an origami horned toad from the word Bacchus — a word that, when it’s returned to its Dionysian origins, embodies the entire gamut of drunkenness, from the mystical, to the giddy, to the concretely rational, to the black netherworld of hopelessness — not only displays one’s ignorance of the past, an of physiology, but also illustrates the weird stridency of those who issue decrees from an ignorant stance. Co-opting language and using it to achieve the narrowest of goals, to defend one’s own irrational context, is tilting at windmills. You aren’t fooling anyone, nor, in fact, do you possess any poetry in your soul.

St. Patrick ran the snakes out of Ireland for a reason.

Go do keg stands ‘til you yark up your Birkenstocks and get over yourself. You aren’t that smart, nor are you that special.