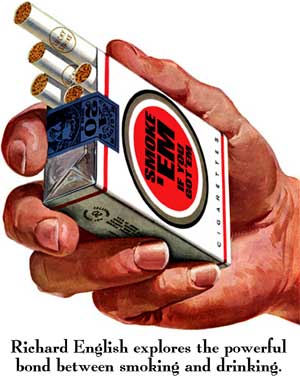 “Mere exposure does not equate to toxicity; it’s the dose that makes the poison.”
—Basic principle of toxicology

Any smoker will tell you that. Each enhances the other, a total greater than the pieces. A pint is only a pint if it’s living in sin with a cigarette — Old World ardent waters shacking up with New World plant life to engender a litter of Fire and Ice puppies.

Bars need smoke, and not for monetary reasons alone. The dim, smoky bar, with its old wood and water-scarred lacquer, is part of our national aesthetic. Think Dashiell Hammett, Mickey Spillane, Humphrey Bogart – guys sprinkling loose leaf from a pouch, rolling their own, their faces set ablaze in a millisecond of match-flare, chasing each drag with neat bourbon. Think Bird, Monk, Dizzy, and Lady Day—horns, keys and silky-sand words be-bopping through the haze. The dark, exhale-clouded, tavern is enigmatic, almost cave-like. Pretty much anything can and does happen, whether you like it or not. Listen carefully. That sound is an echo of the Orphic Mysteries.

The Great Bars: enjoy them while you can because over the next few years, if national trends continue, they’ll be deader than a Mott the Hoople reunion tour. Customer numbers will dwindle, starting with the regulars, and the very best bars, the independents, will finally turn belly-up. Cities will be littered with pub husks; empty, silent, brick boxes staring down Destiny’s twelve-gauge, fated for demolition, or worse rebirth as Starbucks.

Our homes-away-from-home are under attack by a pair of societal attitudes—the Dyspeptic Duo—and their puritanical minions. Neither attitude is new, or even all that uncommon, but in America, 2003, they loom large amid our cultural mores. Presented in no particular order, they are, 1.) Ignorance/Abuse of Science, and, 2.) Willing Self-Enslavement to Irrational Fear. Recent legislation (i.e. laws against the media-created non-problem known as “road rage”; motorcycle helmet laws; statutes making it illegal for anyone but a veterinarian to touch a dogs genitals; ridiculous protests by animal-rights activists against Animal Crackers; plans to brand people busted for drunk driving with large red “DUI” patches; or the Kansas evolution laws) is smeared with their oily fingerprints. But nowhere are the smelly results of scientific ignorance and irrational fear more stomach-churning than when aimed at second-hand cigarette smoke.

On The Simpsons a few seasons back, Homer lit-up in the Springfield DMV. The Mandarin behind the counter slapped him and said he was worse than Hitler. Funny stuff, but not altogether beyond the pale for members of the anti-smoking cartel. Its most popular mantra runs along these lines: “You have a right to smoke, sure, but you don’t have the right to kill me while you’re at it.” Pretty benign, but it gets worse. The “Truth” ad campaign, while occasionally worthy of commendation for ratting on crooked corporate touchholes, often relies on fuzzy-wording and borderline fibbing to paint tobacco companies (and by proxy, smokers) in the blackest light. But the zenith has to be the accusation that parents who smoke near their kids are guilty of child abuse. What a freak show. Not since the Volstead Act has the voice of Moral Authority been so shrill.

Right now, someone is saying something like, “Dude, what are you talking about? Everyone knows second-hand smoke kills people? The evidence is, like, huge. Doncha ever watch TV?”

Yes, it’s true. The evidence against ETS looms higher than Illium’s insurmountable walls, is supported, like Wolverine, by an adamantium skeleton. ETS is the most awesome killer inflicted upon innocent citizens since the Ford Pinto or non-organically-grown tomatoes. If sickness is an army, ETS is its Navy SEALS. Only a fool would claim otherwise—a fool, or one of Big Tobacco’s slippery lawyers.

Actually, the evidence isn’t as clear cut as some people would have us think. Don’t take my word for it, though: look at some recent studies that you’ve never heard about. Our Great Bars deserve a thorough accounting.

Airlines were among the first businesses to announce a ban on public smoking (though some Asian airlines still tolerate the practice to varying degrees), years before the first ETS studies were conducted. Flight employees worried about being confined in tight quarters amid clouds of cigarette smoke. On the face of it, the logic seems sound, but the effects of airplane smoke on non-smokers was never studied in depth until this past year by the US Department of Transportation. The results? Flight attendants would have to spend 48,000 hours of in-cabin duty in order to inhale the smoke of 1 (ONE!) cigarette. The chances of contracting anything more dangerous than a smelly uniform are statistically insignificant.

Along the same lines, anti-smoking zealots spout figures showing how the average non-smoker inhales anywhere from 1 to 5 packs of passive smoke each week, depending on exposure. That’s a huge number. However, the internationally respected (and independent) UK research facility, Covance Laboratories, found in 1998 that passive smokers inhale, on average, about 6 cigarettes/year. That’s about 0.02 cigarettes/day, a number so small it is almost meaningless, and a dose of smoke that’s easier to overcome than a common cold.

Other studies have pointed to the increased risks of lung cancer among children of smokers and spouses of non-smokers in an attempt to guilt puffers into abandoning their stinky habits. However, in 2001, the International Agency for Research on Cancer in Lyon, France, found:

“ETS exposure during childhood is not associated with an increased risk of lung cancer. No clear dose-response relationship could be demonstrated for cumulative spousal ETS exposure. No increase in risk was detected in subjects whose exposure to spousal or workplace ETS ended more than 15 years earlier. Even exposure to ETS from other sources was not associated with lung cancer risk.”

The IARC is second only to the American Cancer Society in world-wide respect for their science.

And speaking of the American Cancer Society, loudest of the anti-smoking shills, they have recently released a report on their own latest study, this regarding increased levels of breast cancer among women married to smokers. They found:

“In contrast to the results of previous studies, this study found no association between exposure to ETS and female breast cancer mortality. The results of our study are particularly compelling because of its prospective design as compared with most earlier studies, the relatively large number of exposed women with breast cancer deaths, and the reporting of exposure by the spouse rather than by proxy.”
Then there’s the American Lung Association. Past ALA studies have claimed a link between ETS and asthma. In 1999, however, they revised their position. A joint conference between the ALA and the American Thoracic Society International resulted in the following: “Passive cigarette smoke often has been thought to increase the risk of active asthma, but studies to date have not demonstrated this association convincingly.”

These examples, while damning, can’t hold a candle to the charges leveled against The Mother of all Studies, performed by the EPA in 1992. Titled “Respiratory Health Effects of Passive Smoking: Lung Cancer and other Disorders,” this study set the stage for all further ETS studies to come (truly the “Mother” of all studies…). Many later reports are merely restatements of the “facts” in the EPA’s documentation. As recently as May, 2003, the study was trotted out again as the most powerful evidence against ETS. You can find it on the EPA website, and it is, to be sure, a scary read.

It’s also so riddled with holes it barely keeps a coherent structure. The problems begin at the outset and worsen from there. Here is a sampling of the highlights.

The report was never peer-reviewed by a panel of impartial scientific experts. Peer-review is standard procedure in the sciences. Real scientists demand a review to check their facts and assumptions. The EPA actively hid their findings from the peer panel which was, by law, supposed to review the findings. What were they hiding?

The methodology of the study was immediately questioned. Trials hadn’t been double-blind, and the EPA’s so-called “biological plausibility” hypothesis was found to be poorly defined.

Federal Judge William L. Osteen, who had access to all of the EPA data, not the “roasted” collection of non-facts in the final report, stated that the EPA had “publicly committed to a conclusion before research [began],” and that they “adopted a methodology for each chapter, without explanation, based on the outcome sought in that chapter.”

This free-form “methodology” resulted in the deletion of findings that ETS posed no risk of lung (or any other) cancer. Their own study proved them wrong and they willfully ignored the data.

In the end, Judge Osteen had the entire study vacated. He chastised the EPA for misusing its mandate and suggested they had bordered on the edges of the law. His ruling is available, in its entirety, at www.forces.org. It contains a nice overview of the “science” used, or rather misused, by the EPA.

So, the “best evidence” showing the perils of passive smoke is a bunch of hooey. The “danger” of second-hand smoke is a phantom. It isn’t true.

For every ETS horror story cranked up by the news media, too many others are buried. The reasons are many, starting with the States’ new-found addiction to tobacco-settlement money, but there are others. Primary among these are, as mentioned at the beginning of this happy missive, Subservience to Fear and the Manglement of Science. It’s fashionable today to wear one’s fear on one’s sleeve. America is, in the aggregate, one of the healthiest nations on Earth. Can it be that some people fail to notice? Do Americans require a malady of their own? Can’t people locate an individual identity without defining it in relation to a disease? Or is it that some folks can’t get through life without something to bitch about, and when we wouldn’t give up our icky ol’ smoking on their say-so, they made up a bunch of lies to get their way? When did the Land of the Free become the Land of the Hysterical Tantrum?

The Great Bars are dying because of fear and bad science, but the solutions seem pretty obvious. Learn to control the first and use the second honestly.

(Note: The author is indebted to the Environmental Protection Agency and to www.forces.org)