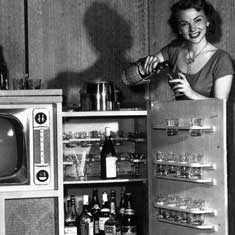 AKA The Booze Box or Liquor Pantry, these demure containers take up little space, are easily disguised and some are actually quite presentable. Some of the more extravagant fold out to reveal sinks and refrigerators. They lack, however, that larger sense of hospitality and authority communicated by an actual bar. 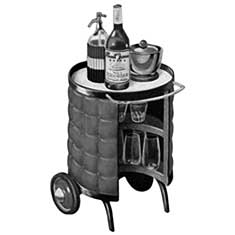 Similar to the Liquor Cabinet, except it has wheels so it can be briskly ushered into a closet when uptight teetotalers or undesirable non-teetotalers manifest themselves. You can also push it through a drinking crowd like a trolley, making drinks as you go, creating a comical effect. 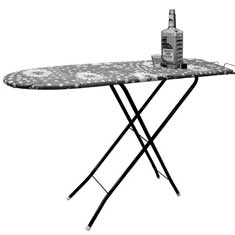 Also known as a “plank bar,” these are common to dorm rooms and high-school blowouts. Usually a repurposed item or simply a flat surface suspended between two objects of somewhat similar height, they can be set up and broken down quickly into seemingly innocuous components.
Right: the most shamelessly lazy version of the Makeshift. 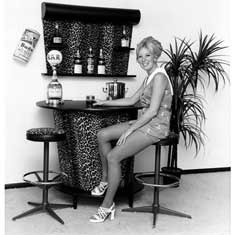 The most common of home bars, the majority of these workhorses were manufactured during the Great Home Bar Craze (1950-1975). They can be found lurking and grossly overpriced in every retro-thrift boutique in the nation. They come in many sizes and styles, including Tiki, Swinger (pictured), Cowboy, Disco and Space Age. 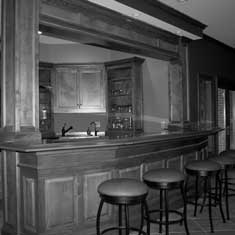 Common to large suburban homes, these impersonal monstrosities are usually built-in, constructed of oak, come equipped with a water supply, and are shockingly well-stocked. With wine. Not surprisingly, these soulless crypts generally see the least amount of use. 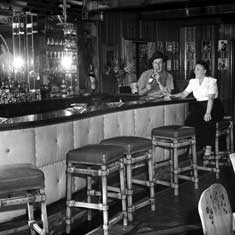 These are what happens when a drunkard has too much money and time on his hands. Usually found in the homes of celebrities, carpenters, and socialites, they take up entire rooms and are indistinguishable from an actual bar that has done away with the indignity of a cash register.
Right: Bud Abbott (of the comedy team Abbott and Costello) shows off his Behemoth.