Of all the vividly-named screw-cap wines (or bum wines, if you prefer) that were born in the 1950s, only a handful survive to this day. The mightiest of them all, indeed, “The American Classic” as its label proudly boasts, is Thunderbird, a creation of the E & J Gallo Winery of Modesto, California.

Gallo today is the second-largest wine producer in the world and dominates the California wine market. According to Fortune magazine, a quarter of all wine sales in the U.S. are Gallo products. But it was Thunderbird that put Gallo on the map and paved the road to empire.

The Gallo operation started out as a mom-and-pop outfit, quite literally. Joseph Gallo Sr. and his wife, both Italian immigrants, founded a grape farm in 1906, which seemed to prosper until 1933 when Joseph shot his wife to death then killed himself. Exactly why may never be known, and the Gallo family has had little to say about it in the years since.

The farm passed to their two elder sons, Ernest and Julio. (A third son, Joseph Jr., was excluded from ownership, resulting in a nasty lawsuit years later). With Prohibition over, the brothers converted the farm to a winery. Ernest proved to be a shrewd businessman, and Julio showed a flair for designing wines. The winery grew and prospered. Still, by the 1950s, they were just one of many California winemakers in the marketplace, profitable enough but of no particular note.

But in 1954, the game changed entirely. In that year, according to Thomas Pinney’s “History of Wine in America,” federal law regulating the definition of wine was relaxed, allowing vintners to add “natural” flavors to their wine. This change revolutionized the wine industry. 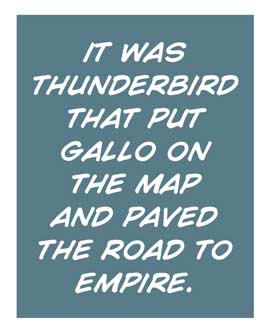 Coincidentally, it was at about this time that two of Ernest Gallo’s sales managers brought him some interesting information. Their salesmen observed that in inner-city neighborhoods, white port wine was a big seller, and store owners were in the habit of positioning bottles of lemon juice and packets of lemon Kool-Aid next to the wine. Customers added the lemon juice or powder to the wine to get the flavor they desired.

You can almost see the light bulb popping over Ernest Gallo’s head.

He ordered Julio’s team of winemakers to concoct a lemon-flavored wine ASAP. They did so, and Ernest took the new product out into the field, to inner-city bars in African-American neighborhoods, offering free samples. The locals, though suspicious of these well-dressed white guys offering free drinks, claimed to like the product. Ernest also invited the citizens of Modesto to the winery for free samples in exchange for feedback. A few unfortunate incidents involving vehicular damage to the grounds and fisticuffs convinced Ernest to limit the taste-testings to bars far away from winery property.

At last, with enough customer input, the Gallo brothers hit on the mixture they were sure would become a big seller. All they lacked was a name. It was a Gallo sales manager named Albion Fenderson, an amateur scholar of Native-American folklore, who hit on the perfect name: Thunderbird. 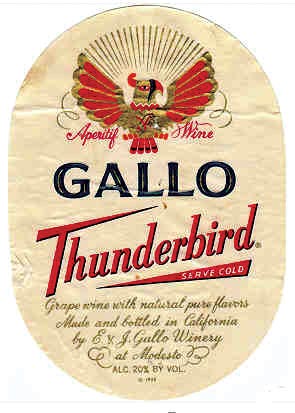 “That’s it!” Ernest reportedly cried out when he heard it. The name had everything he wanted. It was uniquely American. It projected strength and power. And, last but not least, it was exactly the same as Ford’s hot new sports car introduced in 1955.

Gallo spent lavishly on a media blitz announcing the rollout of Thunderbird. Actor Cesar Romero, famous as The Cisco Kid (and later as The Joker on TV’s “Batman”), pitched Thunderbird in television commercials. The ads were filmed at the Thunderbird Hotel in Las Vegas. Thunderbird, the ad implied, was the drink that movie stars and high-rollers asked for.

The radio spots, featuring the now-famous “What’s the word?” jingle, played in every major market in the country. For live promotions, a girl in a skimpy Indian outfit, billed as “Princess Thunderbird,” schmoozed with retailers and handed out free drinks.

Gallo didn’t neglect any potential market niche, including the homeless who were not likely to be reached by television, radio or Princess Thunderbird. According to Ellen Hawkes, author of “Blood and Wine: The Unauthorized Story of the Gallo Wine Empire,” Gallo salesmen deposited Thunderbird empties in the streets of skid-row neighborhoods, to build brand awareness among the wino population.

It all paid off. Gallo salesmen reported that they knew Thunderbird was a hit when it quickly acquired the street nicknames of “Pluck” and “Chicken.” Illiterate street people peeled the labels off empties to show retailers what they wanted to buy. Ernest Gallo told and re-told a story about driving through Atlanta and spotting a man drinking on the sidewalk. “What’s the word?” Gallo called out. The response was instantaneous: “Thunderbird!” and both the wino and the millionaire dissolved into laughter.

By the end of 1957, Gallo’s production level was ratcheted up to 32 million gallons annually. Within a year, almost overnight in industry terms, the winery had joined the ranks of the largest vintners in California.

Gallo’s competitors were forced to respond to the Thunderbird phenomenon. They flooded the market with colorfully-named, screw-cap flavored wines: Tom-Tom, Red Rooster, and Swiss Mist, to name a few. But none of them, as Ernest proudly boasted, “Ever dented Thunderbird’s success.”

Carbonated wines appeared at about the same time as fortified flavored wines, thanks to the same changes in federal law. Once again Gallo led the way, with a product called Ripple, the wine so beloved by Fred Sanford. In 1961, Gallo introduced Boone’s Farm, which eventually replaced Ripple and became, for a time, the best-selling wine in the U.S.

And yet, in the midst of all this success, the Gallo brothers were not entirely happy with the company’s direction. Its success was built almost entirely on Thunderbird, with an assist from the carbonated “soda-pop” wines; the traditional table wines they had always produced were practically ignored by the public. The Gallo name, they feared, was becoming synonymous with cheap, low-class street liquor.

Thunderbird, it was decided, needed to be made respectable. To that end, distinguished British actor James Mason was hired to do a TV spot pitching Thunderbird. First airing in 1964, the ad has become quasi-legendary, a precursor to Orson Welles’ self-degradation for Paul Masson. “I like the unusual flavor of Thunderbird wine,” Mason insists as he pours himself a glass from a bottle displayed on a silver tray. “Thunderbird has an unusual flavor all its own, not quite like anything I’ve ever tasted.” Mason wrote the script himself, a condition he was granted since his compensation (a mere $10,000) was so meager.

Not surprisingly, this misguided attempt at respectability failed. Thereafter, Gallo disassociated itself from Thunderbird by simply removing the Gallo name from the Thunderbird label.

Like Dr. Frankenstein’s monster, Thunderbird was disowned and abandoned by its creator and left to run amok on its own. Gallo turned its attention to the market for more respectable table wines, and in 1971 produced Gallo Pink Chablis, which became America’s favorite table wine for a while in the 70s. In 1972, the Gallo brothers were pictured on the cover of Time magazine. But the monster rampaged on, racking up the sales that helped fund the growing Gallo empire.

Then, suddenly, the monster was laid low.

In hindsight, it was a phenomenon very similar to the wave that lifted Thunderbird (and the Gallo Winery) to its greatest heights that would drive the once-popular monster into the cobwebbed corners of fortress-like inner-city liquor stores, unlikely to ever re-emerge.

It was a time of health fads (bread bowls, frozen yogurt, the Beverly Hills Diet) and a decade-long fitness boom that saw the likes of Jane Fonda and Richard Simmons turn into workout-video superstars. Sales of all alcoholic beverages declined nationally, across the board. The industry struggled to develop new “light” drinks that would entice the health and fitness conscious to imbibe again.

Enter the “California Cooler,” a low-calorie wine punch, not much different from sangria, conjured up by two California entrepreneurs. Sales were phenomenal and soon everybody leapt into the new wine cooler market. By 1985, according to a report in the Chicago Tribune, at least 125 different brands of wine cooler were available.

Gallo entered the market with Bartles & Jaymes wine coolers, barely distinguishable from their competitors but backed by another clever advertising campaign. Television ads featured the fictional characters “Frank Bartles” and “Ed Jaymes,” two kindly old men so honest and down-to-earth they ended each spot by thanking viewers “for your support.”

The ads were a huge success. Soon Bartles & Jaymes was outselling Seagram’s Golden Wine Cooler (pitched on TV by Bruce Willis) and California Cooler itself, racing to the top spot of a very crowded field. Gallo emerged bigger and stronger than ever. And Thunderbird was forgotten. The heyday of the screw-cap fortified wines was over, put to rest by their lighter, hipper offspring.

Then, in the 1990s, Thunderbird’s image, such as it was, took another grievous hit. In 1991, notorious serial killer Jeffrey Dahmer, the “cannibal killer,” was apprehended. In the media circus that followed, People magazine and a number of tabloids obtained some old photos of Dahmer. The most famous showed him passed out, fully clothed, with a bottle of Thunderbird cradled in his arm, the label clearly visible.

By 2003, according to an article in the Los Angeles Times, Gallo was selling only 300,000 cases of Thunderbird a year, one-tenth of what it sold in the barren markets of the 1990s. It is no longer advertised, existing as a “call item,” sold only to the handful of retailers who specifically ask for it.

In 2014, Thunderbird still lingers on—you can buy it online if you don’t wish to venture into the kinds of places it’s sold over the counter—but the Thunderbird of today is not the same as the original. Julio Gallo long ago admitted in a deposition that Thunderbird, originally made from white grapes, is now made with pear or apple juice. The alcohol content is also lower now, 17.5 percent compared to 21 percent when it debuted.

Then again, the Thunderbird legend was never primarily about flavor. It was about providing drinkers cheap booze with a kick. It was about using clever marketing to convince people it was somehow better than the cheap booze the other guy was selling.

So does it qualify as an “American Classic,” as its label insists? Without a doubt. For all its faults and faded glory, during its heyday Thunderbird was a true trailblazer and a financial powerhouse that played a key role in building what is America’s biggest-selling winery. In the annals of hoochology and 20th-century pop culture, this great American classic will always have a special place.