“There is a certain kind of person that will first stab you in the back, then ask your help finding your wallet.”
—F. Scott Fitzgerald

As an alcohol enthusiast, you’re probably aware that the PC nannies on the Left and the Bible thumpers on the Right are aligned against us. And fanatical Muslims, of course.

What you might not know is an even more virulently anti-alcohol group has sprung to life right in our midst. How virulent, you ask? 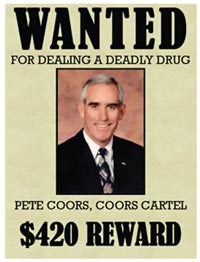 Their propaganda campaign would make the Anti-Saloon League blush. Their billboards announce that alcohol is the culprit behind incest and child molestation. They’ve put out wanted posters for brewer Pete Coors and Denver mayor (and bar owner) John Hinkenlooper, accusing them of “dealing a deadly drug.” They say anyone selling alcohol, bartenders included, is a murderous pusher.

Go to their website and the first thing you’ll notice is a graphic blaming alcohol for domestic violence, rape, and murder. They lay Mark Foley’s perversity, Mel Gibson’s antisemitism and even Dick Cheney’s shotgun incident squarely at alcohol’s feet. Their logic seems to be: Have you done anything wrong? Do you drink? Then it’s alcohol’s fault!

So who is this diabolical organization? Who could have so much hate in their heart for the thing we love so much?

Who would have guessed? We’ve always considered them allies, haven’t we? There’s a helluva lot of crossover between pot smokers and boozeheads, and I think it safe to say drinkers are many times more likely to support the legalization of marijuana than teetotalers.

So what would compel SAFER to so vehemently attack sweet Mother Booze?

Sheer crassness. The organization’s founder, Mason Tvert, is known as the Karl Rove of the stoner set, and no wonder. SAFER has embarked on a win-at-any-cost campaign, displaying the callousness of a swimmer willing to climb on top of anyone’s head, so long as he saves himself from drowning. He figures if SAFER can demonize alcohol enough, marijuana will seem angelic in comparison.

heir main arguing point is this: alcohol kills tens of thousands of people each year and marijuana doesn’t kill anyone, so marijuana should be legal.  And alcohol, well, perhaps the world would be a better place without that evil, murderous thug hanging around.

What they neglect to tell you is alcohol saves many more lives than it takes. Government studies by five different countries show that, due to its health benefits, tens of thousands of fewer people die each year because alcohol is present in their cultures. Research by the U.S. Centers for Disease Control and Prevention and the National Institute on Alcohol Abuse and Alcoholism reveals that if all drinkers in the U.S. became abstainers—by switching to pot, say—there would be an additional 80,000 deaths per year.

I presented this evidence via email to Steve Fox, SAFER’s Executive Director, and he responded by first trying to shame me for defending demon booze, then added: “My personal goal is to keep telling the country how harmful alcohol is until marijuana prohibition is over.”

Do you feel that gun to your head? SAFER seems to think they can not only demonize alcohol without fear of retribution, they can also brazenly extort drinkers into helping them do it.

Their entire act is wrongheaded. They propose to get their initiatives passed by attacking those who would most actively support them; and appealing to those (the uptight, teetotaler gang) who would never in a million years cast their vote for another recreational drug. Most ironic of all, they have adopted the same statistic-warping scare tactics that they have long bewailed the government for using against them.

Some might argue that it’s okay to overlook the devil’s bad habits, so long as he’s doing the work of the angels, but I disagree, because that evil motherfucker will sell you down the river every time. If  SAFER’s cynical tactics are allowed to succeed here, it will spread like wildfire.

I’m a longtime supporter of marijuana legalization, and I usually vote that way. But not this time. On Nov. 5 I voted against SAFER-sponsored Referendum 44, which would have legalized marijuana possession in Colorado. When it lost by 20 points I raised a drink in celebration. Not because pot lost. Because SAFER lost.

Was a lesson learned? Not at all. According to Mr. Fox, SAFER plans to really crank up the bullshit machine next time around.

“Marijuana vs. alcohol is the end game,” Steve Fox, SAFER’s Executive Director, wrote in an email to this magazine. “If you want to start the battle now, great.”

And rest assured, when SAFER launches their ugly new campaign against Mother Booze, MDM will be the first to jump into the trenches and make these treacherous bastards pay. Every goddamn step of the way.

News from the Front: The Great Uncertainty