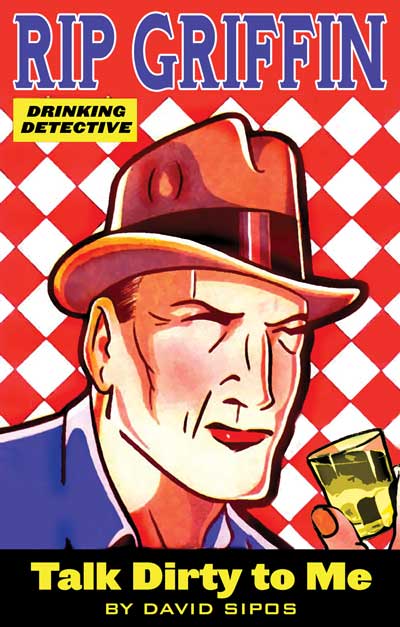 I was sitting in a ragged Lazy-Boy recliner across from an equally ragged Larry Bozeman, proprietor of Bozeman’s Bonds, a bail bonding house. Larry was sitting behind his scarred metal desk. The office reeked of cigarettes, cheap whiskey and the stink of human desperation; I contributed to all three.

“I know you hate these bounty jobs, Rip,” Larry said as he tugged at the bangs of his toupee. “But I need a favor and you need the money. Besides, it’ll be a piece of cake, you know this guy.”

I stabbed out my Camel non-filter in an ashtray molded into a likeness of Kevin Costner. I reached over and picked up a mugshot off Larry’s desk.

“Yeah, I know the guy,” I said. He was Thomas “Ginger” Rogers, a two-time loser and leader of Satan’s Halo, a bottom- tier biker gang based out of Golden. He got the moniker “Ginger” not because he had red hair, but because his last name was Rogers. Awhile back I had busted up a child prostitution ring run by Rogers, but the D.A. hadn’t made the charges stick.

“Why would you bail out this worthless fuck?”

“It’s my business, Rip,” pleaded Larry. “These lawyers, it’s just a game to them, you know that.”

“And it’s a shitty game the way you play it,” I said. I lit another Camel and stood up. “I’ll take the job. Yeah, I need the money, but even more, I need this asshead Ginger back in jail. Any ideas where he could be holed up?”

“I know for a fact he’s up at his mother’s place in Cheyenne,” Larry said.
“Dammit,” I muttered. “Not Cheyenne.”

“I know Cheyenne plenty well enough. But it’s Frontier Days right now. That’s got to be a lousy time to go looking for somebody in Cheyenne. Besides, I’ve never even been to Frontier Days.” I crossed the room and opened the office door. I turned back and looked at Larry. “Unlike what most people like to claim, this is my first rodeo.”

It was a beautiful sunny day as I sped north on I-25 in my ‘65 Rambler; unfortunately I hate the sun. I reached into the cooler behind the passenger seat and pulled a frosty can of Tecate out of the ice. I cracked open the pop-top and took a long draught of the beer as I passed by a huge fireworks store that signaled to me that I was fast approaching the first highway exit to Cheyenne. I came over a rise and saw the exit ramp and the famous restaurant and motel “Little America” with it’s iconic penguin billboard. I finished the Tecate and tossed the empty back into the cooler. Mrs. Rogers lived a couple more exits on, near the rodeo arena. I passed by the rodeo arena, its immense parking lot filled with vehicles and with hundreds of people milling about. I got off the highway at the next exit, made a left and drove around a residential area of ‘50s ranch-style homes until I found Mrs. Rogers’s address, 423 Appaloosa Street. I parked a few houses down. I took my snub-nosed .38 Detective Special out of the glove box, stuffed it into the side pocket of my sport coat and stepped out of the car.

I walked up the sidewalk and stopped across from 423 Appaloosa. I didn’t see a Harley parked anywhere, just an old, rusty Buick station wagon sitting in the driveway. I crossed the street and stepped up onto the cracked cement stoop. The curtains were drawn on all the windows I could see. I knocked on the door. It was immediately yanked wide open, surprising me. In the doorway stood a huge woman, at least six foot two or three, 250 pounds, with a massive black beehive hairdo adding to her already considerable height. She was maybe 50 years old and wore a gleaming red patent leather motorcycle jacket over a black turtleneck and black jeans. She glared at me with her kohl-painted eyes, her pointy features and pink lipsticked mouth drawn into grimace. She looked like a giant, pissed-off Chrissie Hynde.

“You thought you was clever parking down the street,” she said. Her voice sounded like she was sharpening knives. “You gotta be a cop.”

“All cops are dicks, private or regular,” she said.

I let her wisecrack slide; people rarely can pass up making a joke when I announce myself. Maybe I should change the announcement. Then again, fuck people.

“What, are you five years old? Quit asking me why. Is Thomas Rogers here?”

“I was told by a reliable source he was staying with you.”

“Then your source ain’t reliable. I ain’t talked to Ginger in more’n two years. He knows I don’t like that he messes with kids.”

“Do you think he might be here in Cheyenne?” I asked.

“Probly. He loves Frontier Days.He hangs around the Plains Hotel downtown. It’s where the big music acts that are playin’ the rodeo stay.”

“Thanks,” I said. I started off the stoop, but stopped to ask a final question. “Mrs. Rogers?”

“If you hate cops so much why did you just tell me all that about Ginger?”

“I don’t hate cops, I just feel better when they’re not around.”

I gave her quick smile. “So, you read Bukowski.”

“Never mind,” I said. “I just wondered why you gave up your son so easily.”

“Because he’s a perve, sellin’ children, like his Dad and every other goddamn Rogers,” she spat back. “Now get the fuck off my stoop.”

I drove downtown to Central Avenue and the parking angels found me a spot directly across from the Plains Hotel. I put my .38 back in the glove box and took out a lead-weighted leather sap and put that in my sports coat pocket instead. I got out of the Rambler and hustled across the busy street. I passed by a few Harleys parked at the curb, one of which had a personalized license plate “Ginger.” This dope made it easy. I made my way through the people crowding the sidewalk and stepped into the lobby of the hotel.

The Plains Hotel was built in the early 1900s to accommodate the cattle barons and lucky prospectors of that era and still had the dusty ornateness of the period. The Sheridan Room was the name of the hotel bar and was located on the left side of the high-ceilinged lobby. I walked over and stepped through the old fashioned swinging saloon doors.
The saloon was jammed with people, most in cowboy gear of dubious authenticity. It had a long wooden bar with a foot rail and a low ceiling that made the room seem closed in. The back of the bar was crowded with bottles and had a mirror that ran the length of it; I tried to imagine how many times it had been broken in the course of a century’s worth of bar brawls. Over the mirror hung a painting of a plump nude woman. It was straight out of an episode of Bonanza. I looked down the length of the mirror to the left end of the bar and staring back at me was the ugly reflection of Thomas “Ginger” Rogers. He looked me in the eyes and spat a gob of tobacco juice into a red plastic cup. I walked slowly down to where Ginger stood leaning against the bar. He straightened up and took a pull on his long-necked Miller High Life as I approached. He was wearing his “Satan’s Halo” colors. Some of the beer dribbled into his foot-long goatee.

“How you doin’, Rip?” “Ginger asked with a brown-toothed grin. “Up here for the rodeo?”

“That friend wouldn’t be Larry Bozeman would it?”

Ginger kept grinning. “Speaking of friends, this guy here is a new buddy of mine. You remember the band Poison? This here is the singer.”

I looked at the long-haired pretty boy smiling at me. He was dressed in the aforementioned faux cowboy duds.

He frowned at me. “No, I’m not that pussy from Wham!” he bristled. “I’m Brett Michaels.”

“Oh yeah,” I said. “My bad. I guess the leopard spot spandex fooled me.”

Michaels looked at Ginger. “Who is this dick?”

Ginger’s grin turned malevolent. “That’s exactly what he is, a private dick, and I think he’s looking for me.”

“Aw, let’s have shot before we get down to business, whaddya say?” I waved to the female bartender, a slender redhead wearing Daisy Dukes and halter top; I love the summer. “Miss, could we have three Cazadores?” She brought the bottle and three glasses and began to pour.

“Did you know this is George Michael?” I asked her. She giggled at me.
Michaels slammed his hand down on the bar. “It’s Brett, you asshole!”

“I am an idiot,” I said and picked up my shot glass and threw the tequila into Ginger’s eyes. He bellowed in pain and I whipped the leather sap out of my pocket and hit him once in the left temple. He slid to the floor and flopped around like a landed brook trout for a few seconds then fell into a deep slumber. I got out a pair of cuffs and tightly bound his hands behind his back. The redhead stood watching me with shock all over her face.

“Do me a favor and call the cops for me, Red,” I told her and flashed my badge. She took out a cell phone and dialed the number. Michaels was staring at me with his fists clenched. “Don’t try it, George, uh, I mean Brett. This kiddie pimp isn’t worth your time. Let’s just drink these shots.” I picked up the shot that had been poured for Ginger. “Sorry for all the crap. I’m a just a jerk who can’t keep his mouth quiet. Cheers.”

Michaels picked up his glass. “No hard feelings.” We drank our shots and as I put down my glass, Michaels took a swing at me and I had to put him down with the blackjack. It was fun.

A short time later the cops showed up. They gave me some grief about Michaels, but Red backed up my story so they let it go. They hauled Ginger off to the hoosegow to hold him for the Denver cops and I gave Red 50 bucks and we did a shot together. I went back out to the Rambler and as I climbed the ramp heading south, I cracked open a cold Tecate and thought about how I still hadn’t been to my first rodeo and how maybe I should drive back up to Cheyenne tomorrow and see if Red might take me to one.