Many dream of drinking for a living, but Dan Dunn actually pulls it off. Author of the hard-drinking classics Living Loaded and Nobody Likes a Quitter, booze columnist, radio personality and all-around drinking expert, Dan reveals how it’s done. 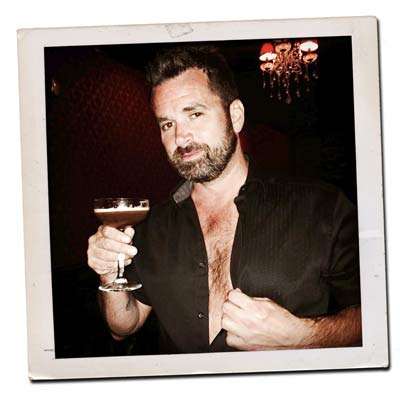 Do you remember your first drink?
The day after we graduated from the 8th grade, my friends and I planned this big party in the woods near my house. My parents kept a well-stocked liquor cabinet that I was obviously forbidden from going anywhere near. My stepdad was no dummy either. I knew he kept a close eye on the liquor supply. So rather than risk swiping a whole bottle of something, I instead filched about a shot from every bottle. But get this—my mom was home, and I was so afraid of getting caught that I decided to smuggle my booze booty out of the house in a racquetball can. To this day I’m not entirely sure why I thought that was a good idea, but I bet it had a lot to do with being 13. So not only did I bring this horrendous, haphazard concoction of God knows what kinds of booze, it came “infused” with rubber and formaldehyde. Needless to say, me and just about every other kid at that party hurled. That was the first time I ever had a drink. And it’s been downhill ever since.

What’s your usual?
A Negroni . . . served in a tennis ball can. I’m sophisticated now.

The greatest drinking story you’ve ever told:
I’ve been telling drinking stories for a living for 15 years, so it’s difficult to pick one. It’s kind of like singling out a favorite child (also difficult, since I don’t have any). But on the whole, the drinking stories I enjoy most are the ones that end with me either getting laid or getting paid.

Have you ever been thrown out of a bar?
In my book Living Loaded I recounted the time I got tossed from a pub just outside of Dublin, Ireland. And the real shame of it is that it wasn’t even my fault. It was a press trip, and one of the members of our group was a fresh-out-of-the-frat douche-nozzle from New York on assignment for some atrocious laddie magazine that doesn’t even exist anymore. Guy looked like Billy Zabka, the dude who played Johnny the smirking bad guy from the first Karate Kid movie. He acted like him too. Indeed, on more than one occasion during the course of that trip I wanted to rear up on one leg like a crane and kick him in the teeth. (A maneuver, I might add, that, if executed properly, is indefensible). Anyway, we’re at the bar, and with that fucking smirk of his Billy Zabka orders us a round of Irish Car Bombs. Again, we’re in Ireland, where actual Irish Car Bombs have been used in acts of terrorism that have caused catastrophic social and political upheaval—not to mention countless deaths—for generations of Irish citizens. Fortunately, we were with a publicist from Ireland who managed to get us out of there alive.

Are you aware of any hangover cures that actually work?
Alcoholics Anonymous.

What’s your favorite bar and why?
Any of the airport bars at LAX. Because that usually means I’m on my way to someplace fun.

What’s the drinking scene like in LA? How does it compare to Philly?
In Philly, nobody can hear you scream…

Hangovers aside, are there any downsides to being a professional drunk?
My job is alternately wonderful, brutal, glamorous, reprehensible, dangerous, hangoveriffic, toxic, deadly, a gift from the lipid solvent gods, and the best excuse for pretty much any horrible behavior you can think of. It’s the best job for picking up chicks, and the worst for keeping them.

How do you know when it’s time to stop drinking and go home?
When the room stops spinning and I start spinning.

The vast majority of history’s great writers were also tremendous drunks who didn’t care who knew about it. Most of today’s writers begin weeping hysterically when you suggest they have a second glass of wine. What happened?
The Internet. Without a doubt. It’s created a world full of cowards and creeps . . . and not the good kind of creeps.

Can you trust someone who doesn’t drink?
If he’s driving home from the bar, I have to.