“Without heroes, we are all plain people and don’t know how far we can go.” — Bernard Malamud

I heard the news in a bar. The story spread quickly and with the same brutally demoralizing effect of soldiers locked in battle learning that their beloved king had fallen. Loud boisterous drunks were struck dumb and silent, grown men wept and suddenly there wasn’t enough whiskey in the bar, there wasn’t enough in the whole goddamn world. 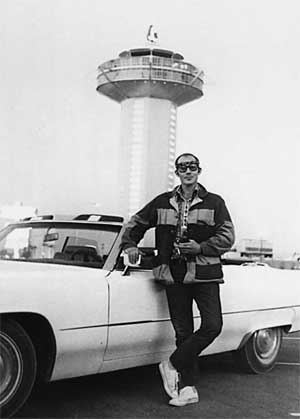 different. I personally crawled into a bottle of rum and tried get a handle on it. Our king was dead.

And like most kings, his demise carried a much more terrible weight and consequence than the mere passing of a great man. Hunter S. Thompson’s death also heralds the passing of an era.

He was the last of a long, distinguished line of drunkard heroes. His genus included Bukowski, Hemingway, Bogart, Gleason, Fields, Churchill and Twain, rugged iconoclasts who distinguished themselves not only as super-functional drunks who rose to the top of their respective fields, but also drunks who were entirely up front about their drinking.

Hunter was undoubtedly the wildest of the gang, and that’s saying something. A lightning rod for controversy, his antics were often portrayed by lesser men as mere self-aggrandizement, but they served a much grander purpose. He elevated an ideal, a towering lighthouse with a brilliant guiding flame for those who decided, like himself and his predecessors, to live their lives to the absolute fullest, consequences be damned.

There was always a powerful comfort in knowing he was out there somewhere in the night, roaring drunk, guzzling high-octane whiskey and railing against a world amok with complacency and hypocrisy. There was always a weird sense that he could pop up any where at any time to stick it to The Man and set things straight. Sometimes he appeared a force of nature, other times a Homeric hero capable of conjuring excitement and purpose from the most innocuous of circumstances. Hunter didn’t have to seek out adventure, he was adventure.

Which often meant dancing with death. Most men spend their entire lives avoiding that jig, but the good Doctor sought it out, he seemed to possess a keen understanding of the song’s deadly rhythm and he boogied down with the fucker.

And while he always managed to escape alive, if not unscathed, he knew that he — like us all — would eventually have to face the music of that last melancholy waltz that ends in a mortal embrace.

Hunter decided to cut that final dance short. It was probably the only deadline he ever beat.

Of course, the soft and sensitive crowd were quick to chime in, warbling that Hunter’s decision to take his own life was somehow a cowardly act, and if I could get my hands around all their necks at once I would soon be the biggest mass murderer in history. It’s akin to a gaggle of timid schoolboys without the guts to even step into a rowboat questioning the courage of an ancient sea captain who, for reasons that are entirely his own business, decided to sail directly into an approaching squall.

Making that sudden leap into the Great Unknown, especially by someone who had taken the most from life, is anything but cowardly. He lived his life on his own terms and that’s how he went out.

Others have chosen to blame mental illness for his decision, which is patently ridiculous. By their timorous standards, Hunter was insane his entire life. You ask me, he was saner than any of them. He understood we are put on this rock not to wait out death, but to live, and Hunter lived more in a week than those punks will their entire lives.

They also say he had a problem controlling his impulses, but this comes from a society that has a problem with suppressing its natural instincts. Hunter made such a splash when he appeared on the literary scene because no one had ever seen anything like it. His sharp, unforgiving prose surged across the page and he seemed strangely willing to insert himself into the story to the degree that he became the story. Instead of observing from the sidelines, he preferred to jump into the game and look for the truth from the midst of the action.

Of course, there are certain risks involved with that sort of behavior. He managed to make a host of enemies along the way, infuriating elements running the gamut from the Hells Angels to Richard Nixon. Not that he seemed to mind. He knew it came with the territory — that if you wanted the real story you had to take risks.

Nowadays the main rule is Play It Safe. Not only should you look before you leap, you should think very seriously about attending a Leapers Anonymous meeting and discussing the possibility that you have a leaping problem. We’re all told at one point to tone it down, to start behaving responsibly and settle into that grey lockstep toward the prison of death. Nearly everyone eventually bows to that pressure, which is what made Hunter such a rare creature. He never backed down, he never sold out the ideals of his youth; instead of toning it down he cranked it up.

He loped along like a crazy tiger and I think we all understood that that was how he was going to go out — at full stride in a sudden spasm of violence. We knew death wasn’t going to finally catch up with him in a nursing home where he’d crawled to die.

People liked to say, and I was one of them, that Hunter had lost a step toward the end, that his tidal wave of talent had crested and broke decades before and was now quickly receding.

Which may be true, though it hardly matters. His ideals were already firmly planted in the firmament of society. The lighthouse still stands and the light still burns bright.