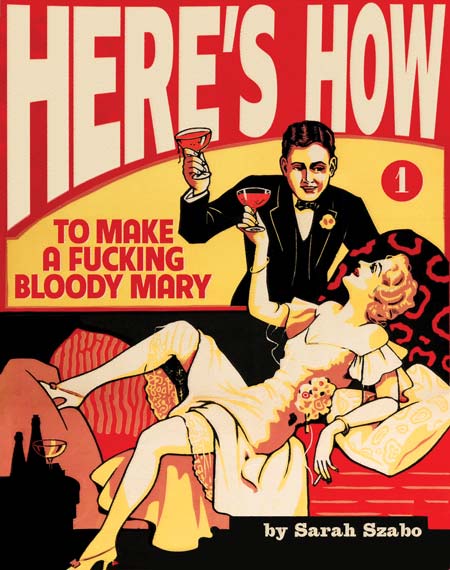 I wasn’t aware until fairly recently that there are some people out there—grown-ass adults, even—who have never had themselves a Bloody Mary.

That’s wrong. And if you know any yahoo New Jersey know-it-all doctors by the name of Neil Da Costa, and you’re familiar with him on a first name basis,please have him email me, because this claim he made a year back about the Bloody Mary being the most scientifically complex of cocktails offends me on a personal level. That is bullshit, and it’s not because he’s wrong—he has a very good point, but he makes things harder than they actually are. A claim like that serves to do nothing but scare people away, filling them with uncertainty and fear of the unknown, and when it comes to alcohol, fear of the unknown is the enemy—and I will have none of it.

Look, I’m aware that there are all kinds of guides on the Internet concerning how to make one of these. I’m not going to say they’re wrong. But I’m right.

Here’s what you need:
Tomato juice from concentrate. I use Campbell’s—they sell them in cute little six-packs of single-serving cans, and have exactly enough tomato juice inside them to make a Bloody Mary with. There are some limp recipes out there that say something about using V-8—that’s wrong. And while I’ve never heard of anybody actually advocating this, there do exist bottles of so-called pre-made Bloody Mary Mix, meant primarily to exploit illiterates and entice misinformed teenagers into shoplifting them out of a dim notion that there may be alcohol inside. These are abominations of science and Nazi perversion, and I bring them up only to advise you to steer clear. There are also some recipes which suggest making your own Bloody Mary mix, but I mean, I dunno, I’m not doing that. Two hours of prep time? Overnight chilling? Finding the blender? You realize that we’re trying to get drunk here, right? It shouldn’t take “prep time” when you’re trying to get your morning swerve on. Or anytime swerve, really. The Bloody Mary is an all-day drink, but it’s also one of the few cocktails you can drink at the crack of dawn without raising any eyebrows—and that’s valuable.

Where was I? This is still the list of ingredients:

Worcestershire sauce. I know, we’re instantly piling on the obscurities, but this is necessary. Get one bottle—use it only for Bloody Marys. Steal it from a restaurant. After having one around for a well-made drink or two, you’ll begin to recognize its versatility in cocktails, and you won’t begrudge having it on your shopping list anymore.

A lemon. And look, I know you might not have a lemon, but I’m getting sick of your shit if you think that’s worth complaining about. They’re, like, fifty cents a dozen, and they keep forever on the counter. Just get a bag. Or, if you think that having the baseline ingredients for this drink is just too much for you, then feel free to go ahead and stay in bed with a horrifically mixed vodka and Coke, if that’s your attitude. Whatever makes you happy.

Hot sauce. Some people say Tabasco, and that’s fair. I’m not a fan of Tabasco in general, but I’m not going to be elitist about this. I recommend Sriracha, because it’s the best hot sauce on the planet, without exception, and I’m personally disappointed if my Bloody Mary lacks it. But whatever you have will work—it just needs to be spicy. You may not like spicy foods, but you still need it—this is a drink. It’s different.

Salt and pepper. This can be garlic salt if you feel like it. Whatever.
And finally, a bottla vokka. It can be any kind of vodka, which is just the preacher’s tits when it comes to cocktails. Top shelf shit made from genetically modified super-potatoes and ice cut from a glacier, or the crumpled plastic water bottle half-full of it that you trip over in the parking lot after a concert. I made one today using vodka that’d been sitting neat in an uncovered plastic juice cup on my desk for three days and it tasted great.

Okay, you got all that? Tomato juice, ice, lemon, Worcestershire sauce, hot sauce, salt, pepper, vokka. Not too demanding. So here’s how to make a fucking Bloody Mary.

1) Get a cup. I prefer a sturdy copper Moscow Mule mug for mine, because they’re metal, and are good at keeping things cold. But that’s just me. I drink everything out of a Moscow Mule mug.

3) Crack the mini can of Campbell’s tomato juice and pour it all in.If you’re using a different brand, do like, five or six ounces. You can measure this if you want. It’d be better if you did, but I don’t care.

4) Two ounces of vodka. This is probably the perfect amount, roughly a 1:3 ratio with the tomato juice. You can do more, less, whatever. I’m not responsible for the taste of the thing if you break from my advice, though. You may be thinking “That’s not strong, what is this pussy shit?” And, I dunno, eat me. That’s more than a shot and if you add too much you’ll make it taste like shit. This way it’s delicious. Up to you.

5) Squeeze some lemon juice in there. Doesn’t really matter if some seeds fall in. Go nuts. I probably wouldn’t use more than half a small lemon, but I definitely would never use Real Lemon fake lemon fraud juice. That’s the dumbest thing I’ve ever heard in my life.

6) Dash some Worcestershire sauce in there. Shit, you poured too much! Well, you’ll get it right next time. Keep on anyway, it’ll still taste good.

7) Salt it. Pepper it. Don’t be stingy, but don’t go crazy either. The Greeks called it sophrosyne—everything in moderation.

9) Alright, now stir that thing. You’re basically done. If you have some celery in the fridge, or a carrot, some peppers, or olives, whatever, go ahead and throw that in there. Skewer it on something. It doesn’t really matter, but it looks fun and vegetables are good for you.

10) Drink your drink. It’s nine in the morning on a Sunday, and your head throbs and joints ache from the night before. The thought of putting on anything more complex than an oversized T-shirt is as distant from your mind as the weather today on a distant moon. As the ingredients mingle in harmony upon your tongue, teasing the tart of lemon, the spice of capsaicin, and the smoky blend of pepper and aged wood of the Worcestershire sauce, you begin to feel emboldened, your pains anesthetized. You realize you’ve been facing the sun through your window, eyes closed, your aches subsiding as warmth envelops you. You forget that you are even drinking alcohol, as the experience is unlike any other, to even the seasoned drinker. Suddenly, the harsh bite of the unwelcome morning has blended into the fading regrets of yesterday, and you finally come to realize that you have sprung fully-formed into the arms of a new dawn. The drink is done. The day is yours.

Anyway, that’s how you make a fucking Bloody Mary.