In between running up monstrous bar tabs and guzzling moonshine, they found time to make us laugh. MDM salutes the best of the primetime hoochers.

Mayberry’s loveable town drunk was so functional he locked himself up every time he got loaded. Even teetotaling Sheriff Andy Taylor possessed an appreciation of Otis’ sponge-like ability to absorb alcohol: “In a way that drinking does a good service for the town. Otis laps it up so fast other folks can’t get to it.” Otis was happy go lucky, always kind and ever loyal—he never ratted out a moonshiner, even when hypnotized by arch-enemy Deputy Barney Fife. Though he was sometimes chased by pink elephants, rode cows and mistook goats for uncles, he was trustworthy enough for Barney to swear him in as a deputy, setting off this hilarious exchange: 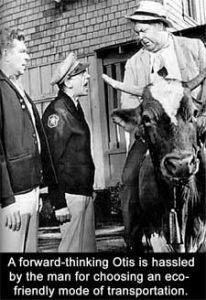 The Usual: Moonshine (Mayberry was in dry county.)
Why So Much: Living in a dry county depressed him.
Trivia: Of all the central male characters on the Andy Griffith show, only Otis was married (perhaps that’s why he drank so much.)
Best Lines: “I’ve got a hobby—drinking.”
“You’re right. I am a killer. I just killed a whole pint.” 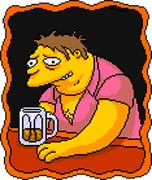 So he eats peanuts out of dumpsters and drinks beer out of ashtrays—that doesn’t mean he’s a bum. Okay, he is a bum, but a talented one. He sings like Niall Donoghue, shrugs off a snootfuls of mace, directed and starred in an award-winning short film (Pukahontas), dated Linda Rondstadt, ruled the snow plow business with a shaky fist as the Plow King, and makes one hell of a two-cheese omelet.

Not to mention brave: he rescued Moe and Homer (and a couple cases of Duff) from a burning bar, and nearly made it into space (he was waylaid by non-alcoholic champagne). Barney actually swore off the booze for awhile, prompted by a videotape of him in drag, sucking spilled beer from the carpet. But hey, it was his birthday. All in all he’s a great pal to drink with—just don’t leave him alone with your beer.
.
The Usual: Duff Beer, but he’s not picky. If it’s got alcohol in it, Barney’s all over it.
Why So Much: Homer got him hooked in high school.
Trivia: Barney’s bar tab at Moe’s is fourteen billion dollars and growing. Moe got NASA to calculate it.
Best Line: “I’m concerned about our beer supply. After this case, and the next case, we only have one case left.” 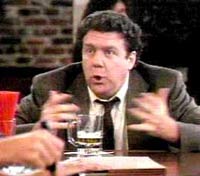 Norm had a fine understanding of his place in the world—the stool at the end of the bar. He never met a beer he didn’t drink and refused to let his lack of gainful employment get in the way of a good drunk—by the time the show went off the air his bar tab was sometimes mistaken for a phone book.
The Usual: Free beer
Why So Much: Fear of work, wife Vera.
Trivia: The reason Norm dropped out of the Knights of the Scimitar, a men’s club that would have vastly advanced his social station? Their meetings were alcohol free.
Best Lines: Norm’s responses to the bartender’s daily greetings have become the stuff of legend. Here’s a sample:

“How’s a beer sound, Norm?”
“I dunno. I usually finish them before they get a word in.”

“What would you say to a nice beer, Normie?”
“Going Down?”

“What would you say to a beer, Normie?”
“Daddy wuvs you.”

“What do you say, Norm?”
“Any cheap, tawdry thing that will get me a beer.”

“What’s the story, Mr. Peterson?”
“The Bobsey Twins Go To The Brewery. Let’s cut to the happy ending.”

“Pour you a beer, Mr. Peterson?”
“Alright, but stop me at one….make that one-thirty.” 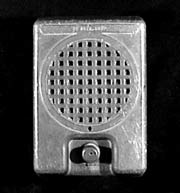 “Hello, this is Cartlon, your doorman . . . “ Never seen but often heard slurring over Rhoda Morgenstern’s apartment’s intercom, Carlton drew the show’s biggest laughs and also apparently drank continuously because he sounded legless from dawn to dusk. Surly and always on the mooch, the only thing that motivated him into doing anything resembling physical labor was the promise of money for more booze.

The Usual: Vodka, ripple and plenty of it.
Why So Much: Didn’t care much for his job. Carlton perceived that happiness is achieved by fulfilling one’s goals and if one sets them low enough, happiness is assured.
Trivia: The Carlton character developed a huge following and fans sometimes sent in fan club membership cards scented with ripple.
Best Scene: Rhoda’s visiting mother exclaims: “There’s a drunk in the lobby, you’d better tell the doorman.” Rhoda replies, “Ma, that is the doorman.” 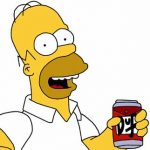 The balder half of Springfield’s power-drinking duo, Homer may not put it away like Barney but his steady pace would wear down a street wino. He began his love affair with beer when he bought his first six pack at the age of 17 with a fake ID (the name on the ID was Brian McGee and he stayed up all night drinking beer and listening to Queen.) Though some detractors will tell you he is lazy and unkind, his ambition knew no bounds when Springfield went dry and he emerged as the Beer Baron, the town’s most industrious bootlegger. And he’s kind enough to buy minors beers and forgive Moe for stealing his Flaming Homer cocktail recipe. Though not the best of parents, (he once stole Bart’s piggy bank to buy beer) he is chock full of good advice for his son, including these three gems:

“Now son, you don’t want to drink beer. That’s for Daddies, and kids with fake IDs.”

“Son, when you participate in sporting events, it’s not whether you win or loose, it’s how drunk you get.”

“A woman is a lot like beer. They smell good, they look good, and you’d step over your own mother to get one.”

The Usual: Duff beer, but is also prepared to drink fifteen-year-old Billy Beer, Jello shots, wine (homemade and store-bought) and SkittleBrau (a Skittles and Duff cocktail he literally dreamed up).
Why So Much: Stifling job, blue-haired wife, demonic son.
Trivia: After promising Marge to quit drinking beer for a month, he became so desperate he snuck into a football stadium and ate the dirt beneath the bleachers.
Best Line: “Marge, I’m going to Moe’s. Send the kids to the neighbors, I’m coming back loaded!”

Karen Walker
Will and Grace

The foremost of TV’s new generation of female lushes, this millionairess drinks vodka martinis for breakfast and will have a fifth in her veins by lunch. Fast on her feet, ultra-confident and armed with a very sharp tongue, she blames what few mistakes she made on temporary sobriety.

The Usual: “Martini, honey, and don’t waste any space with those olives.”
Why So Much: Her husband’s in prison, she’s rich, she’s thirsty.
Trivia: She keeps chilled Stoli in her lunch thermos.
Best Lines: “Honey, I could suck the alcohol out of a deodorant stick”
“What can I do? How can I help? What are we drinking?”
“That’s like saying Pradas are just shoes or vodka is just a morning beverage.”

Karen: (throwing down her cards) Gin.
Will: We’re playing poker.
Karen: I know what we’re playing, I was ordering. Now come on, Mama’s dry!

When the newly-rich Clampetts decided to leave the Missouri Ozarks for the Hills of Beverly, the first thing they loaded on the truck was probably Granny’s still. The iron monstrosity (which sometimes exploded) found a new home next to the cee-ment pond and immediately went into production, distilling Granny’s private stock of ‘rheumatiz medicine’. When pressed, she’d admit her homemade hooch didn’t actually cure rheumatism, but would “make ya happy ya got it!” Jed and Jethro were not averse to having an occasional nip but Granny took to it like a Tennessee hog to Kentucky mash. Every time I watch that crazy little hillbilly woman throw that ceramic jug onto her shoulder and take a long backwoods pull, well, I just want to kiss her . . . granddaughter Elly May. 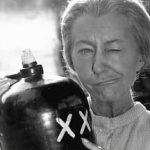 The Usual: Moonshine, a.k.a White Lightnin (“cuz it gets in your bloodstream twice as fast”) Mountain Dew, Corn Squeezins, Tennessee Tranquilizer, Possum Ridge Penicillin, Possum Ridge Paralyzer, Smokey Mountain Skullbuster and Smokey Mountain Soothing Syrup.
Why So Much: Rheumatizm, homesickness, critter trouble.
Trivia: Elly May’s pet bear Fairchild had a weakness for booze and drank almost as much as granny did.
Best Line: According to Granny, a proper batch of moonshine “charred the tongue, made your eyeballs spin and locked your elbows.” Pass me the jug.

After a hard day of not doing much at all, junk dealer Fred would work up a powerful thirst for the soothing respite of, oh yes, ripple. Sometimes he wouldn’t wait until the end of the day, especially if his drinking pals Grady and Woodrow dropped in. And could you blame him? His wife was dead, his son was a big dummy and his ultra-religious sister-in-law Esther had a habit of dropping in unannounced. A born mixologist, Fred found his drink of choice mixed well with a variety of unlikely beverages (see below).
The Usual: Thunderbird (a.k.a. “Ole Faithful”) and ripple, sometimes straight, sometimes mixed:
Mintchipple (Mint julep + Ripple)
Cripple (Cream + Ripple)
Champipple (Champagne + Ripple)
Beaujolipple (Beaujolais + Ripple)
Manischipple (Manischewitz + Ripple).
Why So Much: He owned a junkyard. It kinda comes with the job.
Trivia: You can buy Fred Sanford T-Shirts with “How ‘bout a bottle of Ripple?” on the back.
Best Line: Fred having his weekly “big one” (that’s a heart-attack for you kids): “Oh, d’is da big one, Lamont! ‘Lizbeth, ah’m comin’ to join ya, honey! Wif’ a bottle of ripple, an’ an ol’ toothbrush!”

A fading model on the downside of forty, Nina discovered early on vodka made the long cruel slide easier to bear. Blind men sometimes mistake her for an open bottle of vodka, but that bothers her less than strangers unwilling to pick up her immense lunchtime martini tabs. For Nina, her job isn’t so much a refuge from  drinking as it is a place to sneak drinks. She catches a lot of flak for the uninterrupted stream of vodka flowing into her veins, but the beauty of being drunk is you don’t have to care.
The Usual: Vodka martinis, vodka and tonic, vodka and vodka.
Why So Much: To make it easier for the mirror to lie.
Trivia: Nina hides a bottle of vodka in the elevator call box.
Best Line: Nina discussing a magazine layout: “Perfect. An article on aging next to an ad for vodka. Problem. Solution.”

When he wasn’t in the operating room repairing shattered soldiers, he was drowning his misery with moonshine martinis in the officer’s tent (the Swamp) or Rosie’s Bar. The moonshine sprang forth from the Swamp’s still, which Hawkeye referred to as “The Wellspring of Life”. Built by Trapper John out of medical equipment, the still always seemed full of high-proof liquor, despite the fact we never saw them fire it up for production. Since the MASH doctors never knew when the wounded would arrive, it’s a good bet Hawkeye, Trapper and the thoroughly inebriate Colonel Blake were at least half in the bag most of the time they operated.

The Usual: Moonshine martini, Sahara dry, with one black-market olive.
Why So Much: He was a pacifist stuck in the middle of a war.
Trivia: The still had to be rebuilt twice: once when a vengeful Frank Burns smashed it, and again when B.J Hunicutt took out his frustrations after Radar bailed out of the war.
Best Line: Hawkeye orders a cocktail at Rosie’s: “I’d like a dry martini, Mr. Quoc, a very dry martini. A very dry, arid, barren, desiccated, veritable dustbowl of a martini. I want a martini that could be declared a disaster area. Mix me just such a martini.”