Many of the artists—as they tend to be— were enthusiastic drinkers, and this enthusiasm sometimes spilled over into their work in the form of posters designed to inform and encourage drinkers.

Sadly, their apparently humorless bureaucratic masters did not see the value of these posters and either rejected them outright or had them reworked to lend advice on more politically-correct subjects, such as personal hygiene and venereal disease.

In 2011, a cache of these original rejects were discovered languishing in the basement of a former WPA artist’s studio in Chicago, and now, for the first time, Modern Drunkard Magazine brings them to the public eye.

Click on dots or arrows to begin tour. Or just drag to the left. 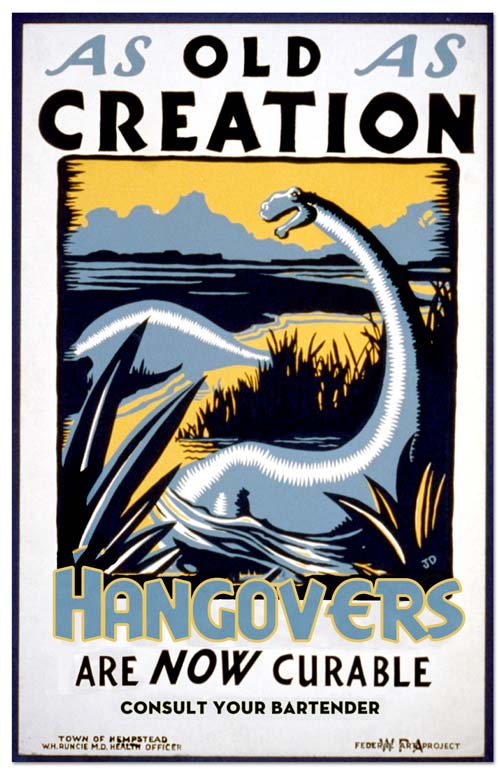 What Really Killed the Dinosaurs
1937— Unknown Artist
How brontosauruses figure into the hangover equation is not abundantly clear (the amount of fermented fruit the huge beasts would have to devour staggers the imagination), but the artist did manage a not-so-subtle jab at those who had not yet climbed aboard the Evolution Express. This poster was later reworked into a syphilis advisory. 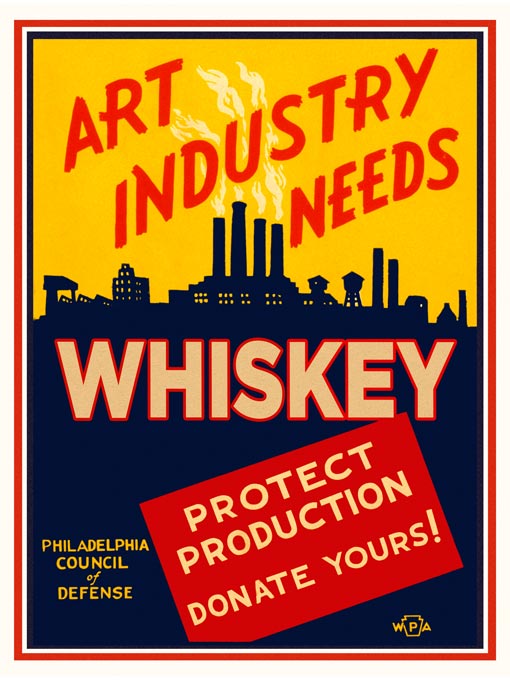 We Need It to Clean Our Brushes, and This Turpentine Tastes Like Shit
1943— Glenn Pearce
Upon entering the war, the distilling of “recreational” alcohol was swiftly shut down in favor of industrial alcohol production, which caused a spike in the price of whatever liquor was still available.

At least one Philly-based WPA artist plainly felt his paltry government paycheck insufficient in covering his monthly booze bills, and sought to appeal to the generosity of the patriotic public who might just have a bottle or two just lying around, taking up space. 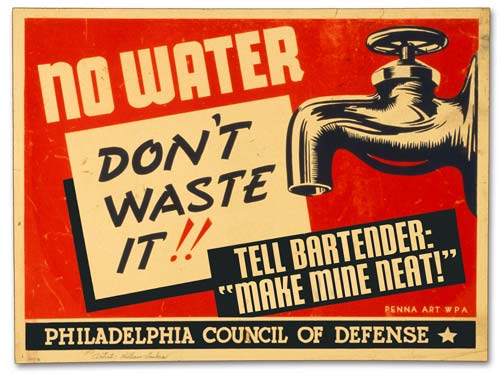 Asking for a Splash Makes Hitler Laugh
1941— William Tasker
All those splashes of water and ice cubes add up, apparently, and this artist looked to patriotic boozers to do their part. This advice also undoubtedly served to “toughen up” those young drinkers about to ship overseas to fight the Axis. 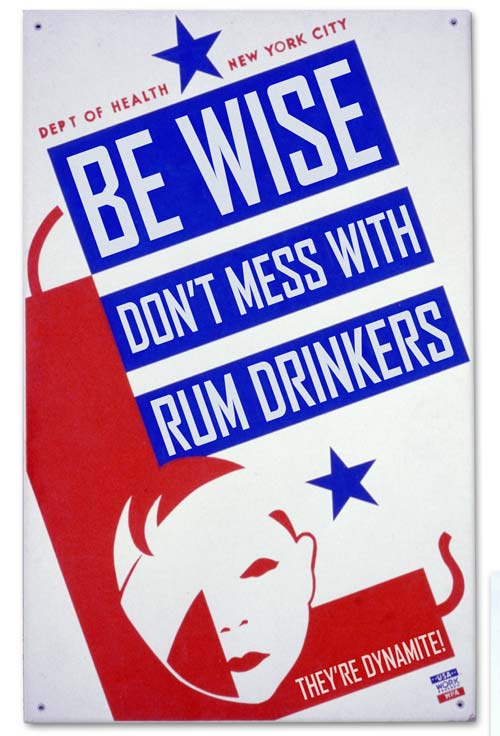 Half of Them Are Pirates and the Other Half Feast on the Blood of Pirates
1936— Vera Bock
One has to wonder if Vera was issuing a fair warning to those foolhardy enough to sit next to her during Happy Hour, or speaking from personal pain. Either way, you can’t fault her wise advice. 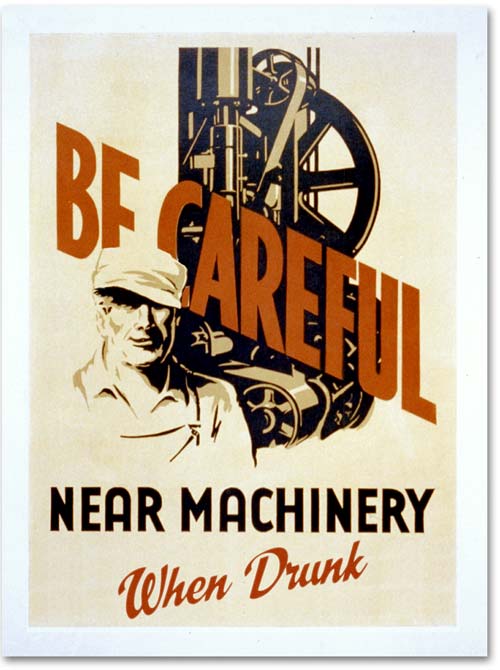 Take It From Two-Legged Tom
1940—Robert Lachenmann
Probably suppressed because it suggested that industrial workers were sometimes punching in drunk—which of course never happened. It was eventually put into service without the “When Drunk” qualifier. 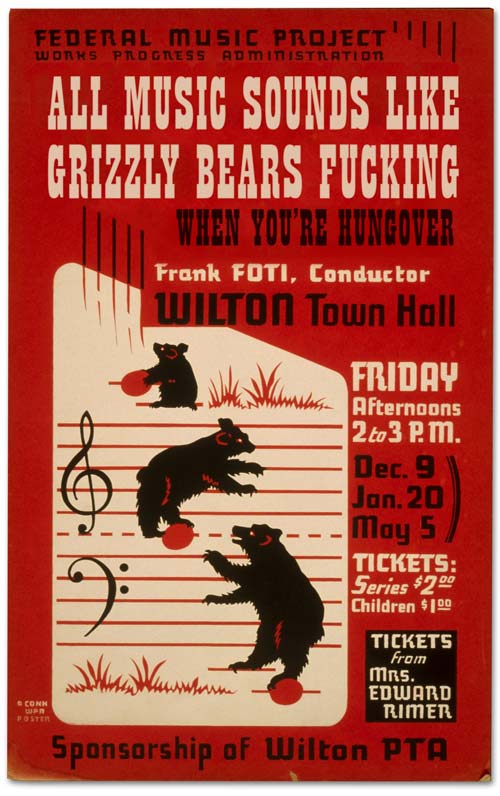 A Grizzly Reminder
1938— Unknown Artist
Undoubtedly done as an in-house joke, this poster was supposed to promote an upcoming concert by the Bridgeport Symphony Orchestra. Apparently the artist had had the dubious pleasure of hearing the Orchestra before, or perhaps he just felt that way about music in general. When hungover 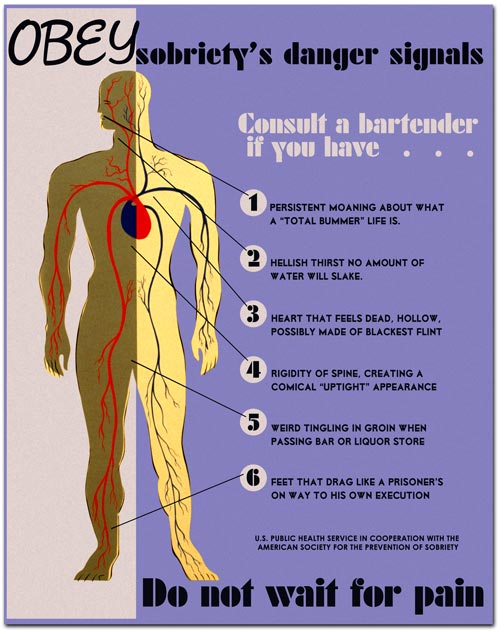 Obey Your Thirst
1936—Harry Herzog
Presumably another in-house joke not meant for public consumption, this informative chart was probably designed with the express purpose of infuriating a certain artist’s uptight boss.

Full-sized reprints of these fine posters are available only at gear.drunkard.com