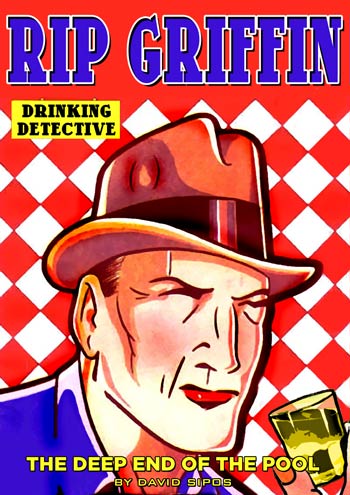 I woke up lying face-down in the gravel parking lot of my apartment building, my mouth filled with grit and sticky with the Rusty Nails I’d been sucking down like a madman last night.

I could smell the sweet Drambuie on my own breath even now. My head felt like Gallagher had used it to splatter the audience. I knew better than to over-indulge in the sweet stuff, but sometimes it just tastes so damn good. I got to my knees and saw the blood on the gravel where my head had been. So it wasn’t just the Rusty Nails. Fuck me. My name: Rip Griffin, Private Dick.

I got myself the rest of the way upright and looked at my wristwatch: 4:20 or so in the a.m. Sunday. I’d been knocked out for a couple of hours. My feet scraped through the gravel as I shuffled to the security door. Good, they hadn’t taken my keys. I let myself in and trudged up the stairs to my third floor flat.

Like so many Capitol Hill apartment buildings, the Park-Aire was built in the 1930s and had that hardwood-floor, arched-doorway charm, along with the thick layer of dust, noisy neighbors, and occasional mouse that charm brings. I threw my hat and coat on the sofa and went into the bathroom to check out my face.

It wasn’t pretty, not that it ever was. A ragged gash over my left eyebrow had clotted but was still oozing blood, my right cheekbone had a purplish scrape, and there was an assortment of reddish lumps and bruises here and there. I still looked like me, only with some added color.

I cleaned up as best I could, went into the bedroom, and groaning at the pain in my ribs and kidneys, stretched out on the bed. I had no idea who had kicked the shit out of me. I was too lit last night to remember the walk home from the Lancer Lounge, about four blocks from the Park-Aire, so I didn’t know if I had been followed from the bar or ambushed in my parking lot. I could ask Jennifer, the knock-out brunette bartender, if anybody was eyeballing me, but the bar was busy and she was doing those girly shots she likes to drink so I doubted she’d have anything to tell me.

I tried to sit up and fell back onto the blankets. Jesus, I felt like I’d been thrown under every bus on the No. 15 Colfax run. I needed some time to recuperate before I went after the ape who did this to me. Somewhere quiet, out of town maybe. Somewhere like Cop City, Idaho.

The 12-seat commuter plane touched down on the tarmac of the tiny Cop City Municipal Airport just after noon on Tuesday. Cop City is small burg in northeastern Idaho where cops from police departments all over the West settle into retirement, including my pop, Rip Griffin Sr. Pop had retired from the Denver vice squad with a gold shield, a fat pension and a thirst for Tullamore Dew, a bottle of which rested in my canvas carry-on bag.

Pop was waiting for me at the curb outside the terminal in his copper-colored ’67 Ford LTD. He saw me, waved and lit a Winston. I opened the door, put my satchel on the backseat and climbed in the front. He looked me over, squinting through the cigarette smoke. He ran a hand through his short gray hair and frowned.

“You hit some turbulence on the way?” he asked.

I pointed at my face. “You mean this? Well, that’s a good news, bad news story. The bad news is my new girlfriend beats me.”

I smiled at him. “I have a new girlfriend.”

Pop laughed and punched me in the shoulder. He shifted the Ford into drive and we left the airport behind us.

We drove past stands of lodge pole pines and green hillsides. The air smelled like Febreeze which made me feel like I was sitting in a rolling motel room.
I eased a flask of Beam out of my bag and gave it a tilt, then offered it to my dad.

He shook his head no. “Little early, ain’t it?

I stuck my head out the window, took a look around, then brought it back in. “Sun’s up.”

He frowned, then said, “I knew it was a woman who worked you over,”
“That so?” I said, interested.

“Sure. The knuckle marks on your face. A small hand made those. Looks like she knows how to throw a punch, too.”

I nodded, deep in thought.

He frowned as we drove past the turn-off to his subdivision.

“Where we headed?” I wondered.

“There’s this guy who makes poteen, potato moonshine. I gotta bust up his still, you know, send him a message.”

“What kind of message?”

Pop rolled his eyes at me. “Don’t make no more moonshine. Whadya think?”

I lit up a Camel straight. “Who are you sending this message for?”

“A guy I know, Rick, he makes poteen, too. This guy is Rick’s competition.”

“So you’re an enforcer now?”

I shook my head. “What’s with all this poteen?”

Pop laughed. “We’re in the land of potatoes.”

We drove out of Cop City and after about a half an hour turned off the two-lane highway and down a dirt road that led into the woods. Pop parked the car behind an outcropping of rock, got an axe and a small sledge hammer out of the trunk. He handed me the sledge and we walked deeper into the woods, maybe a mile. At that point I could smell wood smoke and a sweet and sour aroma.

“Huh,” Pop said. “Smells like he’s using too much sugar.” He motioned ahead with the axe. We walked up a short hill and down below us we could see the big copper pot and coils of the still. We could see the smallish fire under the pot and a bit of smoke rising. Then we saw some movement behind the still.

“Shit,” said Pop. The man stepped out into the open. In his arms was a load of wood. He was a big man dressed in a beige uniform and wearing a Smokey the Bear hat. He was also wearing a sidearm.

I laughed out loud, which was a mistake. The trooper looked up. He dropped the armload of wood and started toward us, pulling his pistol as he climbed.

“Don’t you fucking move!” he yelled.

We didn’t take his advice. We had a good head start because of the hill and instead of going straight to the car, we ran to the left toward a jumble of large rocks.

This is how kids end up antisocial, I thought as we hid amongst the boulders. Watching your dad run from a cop.

The trooper finally lumbered over the crest of the hill, huffing for air as if he’d just finished the Boston Marathon. He bent over, hands on knees, still gripping his pistol, and took a look around. After about ten minutes or so he straightened up, and with a last look around, started back down the hill.

We walked back to the car, Pop cursing Rick all the way.

“How could your friend be so stupid?” I wondered.

After that, Pop didn’t say a word. When we got to the car, he put the tools in the backseat and roared down the dirt road, stopping only briefly at the two-lane road, then heading north, away from Cop City. He was still red-faced angry so I kept my mouth shut.

“You didn’t hit her back, I can see that,” he said after 20 minutes of silence.

“Your knuckles are clean, but you  have scratches on your hands. Looks like you just tried to restrain her.”

He shrugged. We drove for another 20 minutes then turned off on a dirt road. When we stopped ten minutes later, Pop didn’t bother to hide the car, he just took out the tools and started walking. I followed him for a 100 yards until I could once again smell wood smoke. We headed up a path until we came to another still almost identical to the trooper’s. A man I took to be Rick was sampling some clear liquid.

He looked surprised to see us.

Pop didn’t say a word, he just handed me the axe, raised the sledge and brought it smashing down on the still.

What the hell are you doing?” yelled Rick. He took a step toward Pop, but I lifted the axe and Rick thought better of any heroics.

“Shut the fuck up,” Pop said. “You didn’t tell me the guy was a state trooper.”

He continued to break up the still and smashed every bottle and jug he saw, empty or full. Rick sat down on the ground and watched him in silence, looking like he might cry. When he was finished with his rampage, Pop took a roll of bills out his pocket and tossed most of them in Rick’s lap. “I’m keeping a little gas money. Don’t talk to me if we run into each other.” Pop headed out of the woods and I followed.

Once we were back at the car we put the tools in the trunk then climbed in the front seat. Pop sighed deeply.

“You got a bottle in that bag?” he asked.

I got out the bottle of Tullamore and he cracked it open and took a long pull. He handed it to me and I followed suit. Pop started the old Ford and put it in gear, but before he drove he paused and looked at me.

“I’ve got to get me a hobby. Still-bustin’ is no way to beat boredom.”

We both laughed, had another pull of whiskey and Pop drove us back to Cop City.

“So what’s this hellcat’s name?” he asked.

“Jennifer,” I said, touching the gash on my forehead.