The tag-team duo Beer Money, Inc. is made up of TNA (Total Non-Stop Action) superstars Robert Roode & James Storm. They are three-time World Tag Team Champions, and James Storm was declared the TNA drinking champion after he kicked the crap out of Eric Young in a nationally televised bout. You can watch the boys pound opponents (and beers) every Tuesday at 9pm ET on Spike TV. 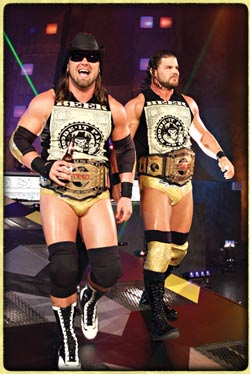 MDM: Tell me about the first time you each got drunk. I mean really drunk.

Roode: Man, I was young. I don’t even remember, that’s how bad I was trashed.

Storm: I was actually nine years old. Got into my granddaddy’s moonshine.

Roode: I was about 11. After a hockey game in Canada, some buddies and I talked someone into buying us a case of beer.

MDM: “Someone” bought it for you? Who was it?

Roode: To quote the Tootsie Pop commercial: “The world may never know.”

Storm: My mom used to put Jack in my bottle when I was a baby. Cutting teeth.

MDM: Did your granddaddy give you the moonshine?

Storm: I slipped in and “borrowed” it. Took it behind the house and drank it up with a friend.

MDM: You need to get loaded, but you only have 20 bucks. How do you spend the money?

Roode: Give it to Storm. When it comes to booze he’s the man with the plan.

Storm: I’d go down to Dickerson Road in Nashville, find a drunken stripper, and let the party begin!

Roode: You said “stripper” and not “strippers.” I gave you my twenty.

MDM: Andre the Giant was one of the greatest drinkers of all time. He drank tons before and after matches. How about you guys?

Storm: I drink my beer before and after I whoop someone’s ass.

MDM: How much do you drink on a normal night out on the town?

Roode: Depends on who’s buying. Didn’t get rich buyin’ my own drinks.

Storm: Probably a twelve-pack of Bud and a fifth of Jack.

MDM: Why do drinking and wrestling go so well together?

Storm: Well, I’m a redneck who likes to drink and likes to fight, so it works out well that I get paid to do both.

Roode: Some guys when they drink think they’re tougher than they really are. Storm and I are there to show them different.

MDM: If you could get loaded with any three people, who would be on your “Dream Bender Team”?

Storm: They are real people. I talk to them every time I drink.

Roode: Keeping Storm out of trouble.

MDM: Do you trust people who don’t drink?

Storm: I usually take one with me to hold my beer when I have to use the bathroom because they won’t spill it.

Roode: Never with my money.

Roode: You never cease to amaze me. 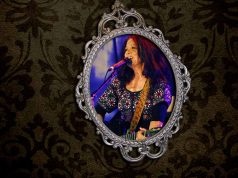 Drunkard of the Issue #60: Johnette Napolitano