A butcher, a baker, and a candlestick maker 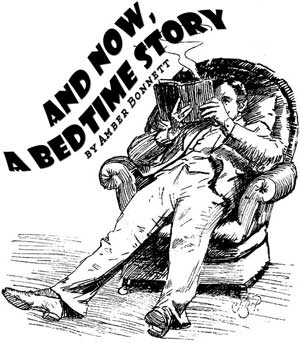 Walk into a bar.
A bloody mary, a buttery nipple, and a hot damn
Coming right up
Two clocks get up and dance

“I,” screams the butcher, waving red paper hearts
in smoky air.
“I have in my hand a valentine most impressive
from Pauline to Greg
found in a muddy gutter where a mighty king
once peed.
It goes for fifty cents.”
Jack and Jill pop two Loritab pills.

“Well I,” booms the baker, laying a wadded napkin
on the ledge.
“I have in this tissue a tooth from the legendary
Mexican Chupacabra,
Who roamed the vast sandboxes of mid-America.
A deal
At only seventy five pesos!”
A pumpkin hiccups in the corner booth.

“Still I,” beams the candlestick maker, grinning
at his tiny hands
“I have here in this box something special-
a shard of sky
given to me by Honeydipper Dan through
a great tornado
I’d let it go for a dollar.”
A somber skeleton tinkles the piano keys

“Gentlemen,” looms the barkeep polishing
a screaming glass
“I have for you a tab never paid, an arm
once used to wrestle Cerberus himself, and a
boot which has fit quite nicely into the
asses of mice and centaurs alike, now pay up.”
An uproar picks up where a gang of broomsticks cheat at cards.

“Dear sir,” replies the butcher, drawing a
line invisible on the bar
“I have for you a clogged drain of mass
proportions indeed.
Received by Uganda when the ancient flood finally cleared up.
I am confident you will find it priceless.”
“But I,” followed the baker, leaning closer
to his empty cup,
“I intend to pay you with an insatiable appetite
for chocolate and pickles
received in my previous life as Harriet Tubman
on the arrival of my second child.
“I’m assured you’ve never received a tip like this.”
“Last I,” cooed the candlestick maker, jumping
from his seat,
“I hereby bless you with a case of amnesia,
lent to me second hand by a young soldier
in the Olympus-Atlantis war… So fine sir,
another round please.”

A dramatic pause and then…

A butcher, a baker, and a candlestick maker
Walk into a bar.