It’s Friday night and the bar is crawling with feminine felines of every sort:

The slobbering, the smashed, the cackling, the delirious, the insane, the wineheaded and the downright dead-drunk gorgeous. You’ve been here before yet tonight something is different.

You’re out of the game. Why? Because you finally found her. Amidst the double-barreled whiskey-shot crossfire of courting, kissing, crashing and burning, the smoke parted, the sun shone through and providence delivered into your arms your new sweetheart. You’ve gulped, grunted, swilled and swayed through the vampiric hordes and now she is yours and life is good.

As you lean against the bar she’s probably at home polishing your Saturday Night flask and reading the acclaimed How to Mix Your Man’s Drinks So He Feels Like God. So tonight you’re going to catch your breath and put to test that absence makes the heart grow fonder theory.

You notice something else is different. Now that you don’t have neon letters blinking I’M SHITFACED AND DESPERATE across your forehead, the ladies are taking notice of you. Not the undesirables of the past who were drawn by free drinks from a man in the throes of misery loves company. No, I’m talking about the other ones. That small demographic of interesting intelligent attractive single women who want to take your clothes off . . . and maybe theirs too.

As you ponder this over a T and T you can’t help snickering at the irony. Temptation is a bad drunk who knocks only when you’ve liquor enough for one. Naturally, the decent fellow that you are, you will nevertheless be inclined to share but . . . don’t do it, buddy.

It isn’t true that what she doesn’t know won’t hurt her. It will hurt you and you in turn will hurt her. When the magical bond of trust and intimacy are breached by infidelity it plants the seeds of an evil weed in your mind. That weed will grow and soon choke the pure grape vines of your heart. When you least expect it a ghost will creep up from behind while you’re slamming a bottle of Strawberry Boone’s Farm with your buddies and whisper suspicions. It will suddenly dawn on you that she’s off somewhere uncorking a bottle of burgundy with some jackass who probably thinks it’s champagne. Of course she’s not, but hey, you screwed around when things were peachy, why wouldn’t she?

So why take the chance? Once you’ve given in to temptation you can kiss your happily-ever-after plans goodbye, say hello to multi-chapter breakup hell, and then you’re back to square one. It’s true that lonely little square that keeps the entire state of Kentucky in business but, trust me, those whiskey distilleries will survive without your business.

I’m not saying you should let out a little cry and run straight home if some lovely girl offers to buy you a drink. That would be rude and uncivilized. Free drinks are where you find them, as the saying goes, and if a kind lady wishes to break the ice, well, then she should pay for the whiskey that’s poured over the ice as well.

The secret, from that first cadged drink on, is to not let the booze get your libido, uh . . . interested, but rather, to get it inebriated. So inebriated it will get mad, not want to play anymore, and take its balls home at the end of the night.

So be strong, fellow drunkard. As strong as the booze you’re getting her to buy you. Resist temptation. Remember your girl. Remember you love her. Almost as much as the free pint of Guinness and the double shot of Tuaca in front of you.

And to make it even easier on you, I’m going to put names to the faces of temptation that will buy those fine drinks. I will give you the power to look temptation directly in the eyes and say, “Are you buying, sweetheart?” 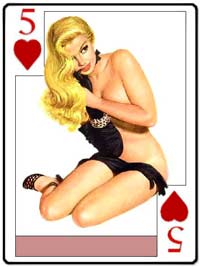 The Undone Damsel
She inhabits the darkest corners of the bar yet the shadows will not hide her. She speaks rarely, drinks heavily and approaches never. The fact that you’re sitting next to her and she bought you a Seven and Seven is probably more of a thank you than a come on. You’re the only man who’s met her repeatedly and never once spilled beer on her while making a pass. The running W’s across her forehead hint of inner turmoil and confusion, and by taking the barstool next to her you’re cock-blocking the predators that prey upon the confused and weak.

Perhaps you used to be one of those predators. But now, secure in your fortress of monogamy, you can actually have a normal conversation with an attractive, lonely girl. Since you’ve probably never done this before, you may actually learn something about the human condition, from the female point of view. You may learn how she won a whiskey distillery in a high-stakes poker game. If you can choke back the come ons that will want to gush out of your mouth, you may learn a few things about poker and the wonders oak barrels do to sour mash. You see, sometimes when you’re not thinking with your dick, the lessons learned can last far beyond the next morning. It’s true. 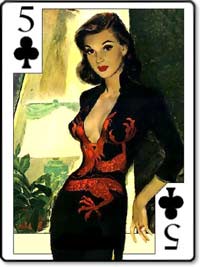 The Unprotected Queen
This beautiful baby is usually surrounded by at least three guys in Avalanche Jerseys and two girls of lesser beauty, so it’s a mystery why she’s flying solo tonight. Maybe it isn’t ladies night. Maybe the schlubs she skims free drinks from went broke buying cardigans. Maybe she discovered she doesn’t like men without penises.

Whatever the case, this belle has probably drank at least half a million dollars worth of free booze in her time, and it’s high time the lady bought one back. Play her. Be attentive yet removed. Since she’s unprotected by her usual shield of cronies, she’s probably insecure. Say, “Wow, I’ve always wanted to do a shot with you but you always seemed so busy. I can’t imagine what it’s like to have so many friends. To be beloved by so many. You’ve got to just feel great about yourself.”

Be sincere yet unmerciful when she offers to pay. Make her drink a double Maker’s Mark. No Kamikazes or Purple Pansies or any of that foo-foo crap. If she doesn’t offer to pay, roll this nugget out: “Well, it was really great to meet you. I’m sure your gang of pals will be here any minute. Maybe we can have a drink and a shot together later when you have time.” Fearful of being alone, and more importantly, being seen alone, she will give in. Get the shots flowing quick and make your cocktail order a double as well. Once she’s smashed don’t be shocked when she tells you , “I hate all my friends. They’re all a bunch of crude, shallow, Budweiser-swilling jocks. Every time I want to talk about something besides sports they look at me like dogs that’ve just been shown a card trick. It was really nice to get to know someone different tonight. Can I buy you another drink?” Well, sure! 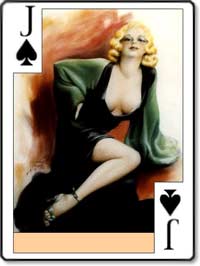 The Alcoholic Apprentice
This youngster has been hanging around bars for only a year or two. She still spills beer down her face when taking the first sip off a pint of Boddingtons’s. She still chokes and bugs her eyes after a shot of Jameson. She still maintains the nasty habit of making eye contact with the bartender when she doesn’t need a drink.

But she’s not all bad. She’s astute enough to take note of your casual panache with the booze. She’s swooned with desire watching you slam double shots of Cuervo without even a flinch. She’s seen you walk into a bar, never touch your wallet and stumble out wasted.

Now she’s sitting there trying to make good with a seasoned veteran drinker. Poor kid. A room full of drinkers and not one of the bastards has bothered to teach her how to make the most of her bar experiences. It’s up to you, and you’re up for it. So long as she’s buying.

First things first: teach her how to do a shot properly. Have her buy two shots of Jim Beam (and you’re going to need a cocktail to back it up, right?) Most chicks drink that foo-foo shit so they can swish it around in their mouths like mouthwash, enjoying the fruity flavors. It’s called a shot because of the speed in which it is drank. Lead her through the rest of the basics: don’t stare at the bartender even when you want a drink, and don’t pay for drinks unless you have to. Especially if you’re a beautiful girl. Since she’s buying, save that lesson for last. Order another round of shots to confirm that she was listening. Explain that almost all bars have a ladies night and she should plot her week accordingly. You can agree to accompany her on those nights to expound more wisdom, so long as she agrees to always come back from the bar with two free cocktails instead of one. When it’s not ladies night, point her at the jarhead in the Reeboks. When he offers to buy her a drink, instruct her to always double up. One for her, one for you and, looky, she’s so busy learning she forgot she wanted to make out with you. Saving you the hassle of remembering not to let her. 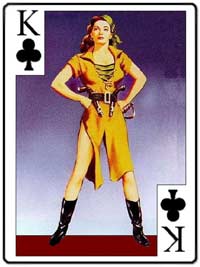 Your Ex-Girlfriend
There you are. You’ve got a free fade on, your conscience is crystal clear and the wallet you’re sitting on is so fat it feels like a pillow and then—holy shit please God this can’t be happening.

She strolls through the door and your eyes start to water, your mouth goes dry, your ears begin to ring and start bleeding internally. Too late to run, she’s already seen you. Sweet Mother Mary, what to do?

Play it off, pal. Hang in there. Steady . . . steady . . . good. The last time she saw you was ages ago, when you were a piece of shit begging for her love and just five more bucks for a forty. Now you’re cool and collected, nonchalantly ordering a double Jack and Coke and surrounded by beautiful babies. It’ll miff her when she sees that you’re unaffected by her presence and she’ll quickly try to regain some blood-soaked ground. Be polite. Be as sweet as a Tuaca lemon drop. When she sees you no longer love/hate her, she’ll open up a bit.
“Baby I’m sorry for all the things I put you through,” she’ll coo. “I’m sorry I poured your virgin bottle of Gentleman’s Jack down the sink. I’m sorry I ran off with the guy from MADD. I’m sorry I laughed while I crumpled your crippled soul into a tight little nasty ball and drop-kicked it into hell.”

She may even mean it. Nod knowingly. Smile and say, “Well, I could use a drink.” If she possessed the slightest taint of a soul the rest of the the evening’s drinks will be on her. Especially if you don’t forget to wave the “I was a really good guy to you and you pissed in my face” card around the room.

At last call, when she suggests a nightcap, and she will, give her that cruel grin you’ve been saving up and say: “Sorry honey. I’ve got a girlfriend.”