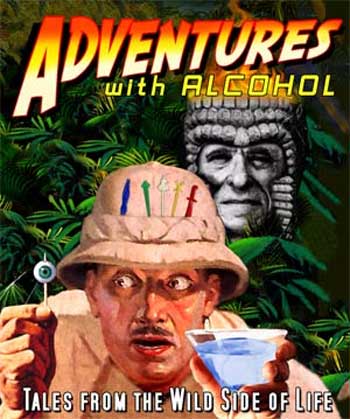 Fast Times in the Vomitory

My troubled body dangled from the eighth floor window, gagging, convulsing, puking, and it dawned on me that I ought not to have tried to out-drink a seven foot Indian.

The building’s updraft spread the vomit like a parachute on its eight story plunge toward the dorm’s front entrance, where the first volley sprayed the unsuspecting chumps who happened to be in the landing zone at the wrong instant. Dribble oozed down the brick wall under the window.

My trainers held tight my belt to prevent me from tumbling out the window, all the while cursing me for losing. They had each lost a week’s meal money, having taken the odds, and were in foul humor. My rear end was now my high end, closest to their faces, and I knew they wouldn’t hold on long when I started shitting my pants

Thus, sadly, ended my match with the big Indian, a dead ringer for the giant, deaf-mute Chief in One Flew Over the Cuckoo’s Nest. My guy didn’t waste a lot of words, either.

A New York City boy who wanted to be a cop, he lived next door to me in the dorm. When I arrived, he promptly introduced me to his pub downtown, where he personally oversaw to the engraving of a mug with the initials P.W., where it hung on a pegboard with dozens more. He’d drink for great lengths of time, then sing When Irish Eyes are Smilingand cry every time like a girl at Christmas. An Irishman had gotten into his family tree and it apparently meant a lot to him.

We were pals, on equal footing, no grudges, no debts, until one evening while I was in my dorm room minding my own business and the bastard burst in, closed the door and threw his body against it, guarding me from it.

He proceeded to let the mother of all farts, copious even for a pizza-eating, over-weight seven-footer. The room temperature jumped ten degrees. My face flushed, my eyes watered, and then I was nauseated. Desperately I tried to wrestle my way around him and out the door, with no chance. He was a stone wall.

I bolted across the room to open the window but he caught me and pinned me to the bed, laughing like a goddamned hyena. The others were laughing in the hall. It was the low point of my college matriculation and revenge got on my mind.

One evening at the pub, the big-son-of-a-bitch marched in and announced that he could out-drink anybody there. Just so happens I had earlier that very day made a similar boast, in jest of course, but I was vigorously reminded of my boast right there in the open, in front of the Indian and other associates. Under the circumstances, I was left with no viable choice but to defend the integrity of my word.

“Okay, okay,” I said, “but not tonight, I’m already too far down the road. Besides, we need time to iron out the rules and get some side bets going.”

His lazy smile left him and his eyes grew steely as they locked on mine. “Any time,” he said. “Any place.” I hadn’t seen that look before. My scalp tingled.

“Bullshit,” he said. “Are you a man or a fucking Girl Scout?”

Thus started the negotiations. We set the match for two weeks out, on a Friday night, which allowed for posturing and maneuvering on the handicapping, bets, strategies, rules, etc. Our bet was the loser would buy and he beat me before we even started by only agreeing to a three beer head start.

On the side, he developed into a 2-to-1 favorite which was obviously low, seeing how he out-weighed me by 150 pounds and cheated me on the handicapping. Some, though, had witnessed my game and I was proud to come in as a 2-to-1 underdog.

As Friday approached, to most folks it was shaping up to be yet another monotonous weekend at the staid SEC school, where all the frat boys go off to adventurous destinations, leaving us poor saps and foreign-exchange students to ourselves.

But in Room 808, North Tower, things were different—we were getting ready to burn down the house. The overseers were icing two cases of beer as I headed out to the pre-match meal.

On the advice of my trainers, I ate a particularly greasy meal, all fried. They said the grease would make the beer slide through me like shit through a goose. It made sense to me at the time.

We had negotiated for the drinking pit to be my room. Home court advantage was huge, I thought—my bed, my music, my shit. My back was literally against the wall, on my own bed for god sakes, with no place to retreat. I had to defend.

For a drinking robe, one of my trainers borrowed a purple silk job from the Chinese exchange student down the hall. I wore my granddad’s John Deere cap (my good luck cap), we cranked up The Allman Brothers and lit incense. My trainers took turns giving me neck rubs.

The theme from Rockyarrived before the Indian and his entourage, blaring so loud I was sure the Chancellor’s wife’s tea cups would rattle. I plugged my ears and watched one of his thugs strut into the room carrying a boom box the size of your average midget.

The Indian strolled in barefooted, wearing his usual shorts, the ones he never washed. His long, gnarly toes could strangle a grown man and he knew they repulsed me.

The referee, whose main job was to ensure no cheating, made the thug turn off his boom box—home court rules. The Indian sat his ass on my roommate’s pillow and massaged his butt cheeks a few times, working half the pillow up his ass, like a dog marking his territory. Other interested parties and fellow partiers took their places.

We watched the Indian as he leisurely drank his first three beers, the mandatory head start. He went to piss, retook his pillow, scratched and nodded.

I mentally reviewed my brilliant strategy: drink like hell. The Indian, though, had another strategy and when the bell rang, it was like lightening hit his elbow and he guzzled four beers by the time I’d finished my first. He got three-up right away.

I stuck to my game plan and drank like hell, steady and fast, but he hung with me in lock-step. The umpire, whose job it was to keep score, kept saying, “Three-up, three-up, three-up.”

I attempted trickery — knocking back two while he was pissing, but he came right back at me. I tried slow, fast, whatever: three-up.

After consultation with my trainers, I reached into my suitcase for my Jack Daniels (this was back when it was the real deal) and offered, by God, a toast to the Irish. A tear leaked out of the big bastard’s eye and he said, “Bring it on.”

After the whiskey shots, I took a long hard look at him, to see how much game he had left — there he sat, as best I could focus, stoic, staring back, looking bored. It was then I realized the son-of-a-bitch had a hollow leg and I couldn’t beat him fair.

“Hey,” I said, “what’s say we put a towel under the door and smoke some reefer?”

“Pssss,” I whispered to him, pointing to my hand, “let’s take these little red pills. We’ll feel very, very great.” I intended to conceal mine under my tongue until I could spit them out.

After it was woefully too late to make a difference, on advice of trainers, I took to some calisthenics. They thought it would sober me up but I think it accelerated my demise.

The Chinese student started to dance and it was about then the change came over me, and sadly for my roommate, the first spew, a heavy one, was a direct hit on his turntable. Oh my, someone forgot to replace the cover. This was the same turntable he wouldn’t let me touch for months after we moved in together, afraid I’d somehow fuck it up.

With more spew imminent, I lunged for the open window and luckily got hung up on the sill instead of plunging directly out the window. Hands grabbed my belt and I hung there, alternatively spewing and gagging, trying to catch my breath. Suddenly,   I sensed new trouble brewing from behind. My roommate was going berserk over his expensive turntable, which   now was worth considerably less, and tried to overpower my trainers and shove me out the window. After a harrowing interval, the Indian managed to restrain him.

You bastards, I thought, but for the grace of God, your ass would be up here heaving out your guts. Your time will come, you swine, and I will be there and there will be hell to pay.

I was gagging deeply when the intestinal volcanic eruptions commenced. I had enough wits about me to know if this became an interactive sport, whereby my trainers got a little soiled also, I was on my own.

I righted myself and promptly hurled on the purple bathrobe. The Chinese exchange student wasn’t dancing anymore and the match was over. I stumbled down the hall to the bathroom and shower. The Indian had whupped my ass good.

Legend has it that the Indian went drinking downtown later that night, but I couldn’t swear to it.

The evening was not a total loss. The dribble, the drool, the DNA waterfall under my window burned the brick,   creating a bleached monument to the occasion and earned me a certain amount of bankable notoriety around campus.

The contest became a romantic tale of heroism that could be told at the pub, then dramatically backed up with a simple field trip. Standing in the asphalt parking lot, gazing at the high-up window, I’d boast and we’d toast the blemish on the brick.

Training for the rematch began immediately and I have kept at it for the nearly 30 years. I haven’t spoken with the Indian since those days and if he happens to read this, I say: Until we meet again, my friend, may Irish eyes smile upon you . . . but when that day comes, you’re going down.

So long as you take the proper six-pack head start.