Remember your first drink?
Al Barr: Bavarian beer. I was around ten. It was a beautiful experience.
James Lynch: Can’t remember a thing. 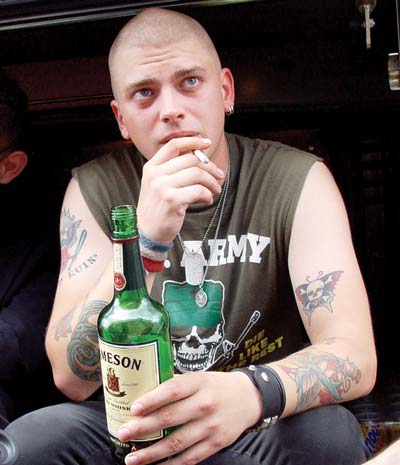 Liquor…
AB: I like to drink rum. The Mayan, the Jamaican.
JL: My current whiskey is Makers Mark. A lot of the members of the band are big Jack drinkers but I’m taking a break from the Jack. Nothing bad will happen if you switch whiskeys, everyone knows that. We got a couple of guys that are vodka drinkers. We’re not very picky, whatever you want to throw at us is fine. I actually found myself drinking Red Bull and vodka before going to bed last night because it was the last thing I could get my hands on.

Beer…
JL: Yeah. Bud. We do love Guinness, don’t get us wrong. But people get this idea that that’s all we drink. But as far as quantity and price go, I’m a Bud guy day to day. Unless we’re drinking forties, then we’re drinking Schlitz. Spicy was a Guinness guy, he’d bitch if there wasn’t any around, but you’d see him going back to the cooler for the tenth time for the beer that he’s got a complaint about.

AB: A friend of ours wedding recently we played a few sets, drank a lot of wine, got silly. Some guys lit their pubic hair on fire on stage, all of a sudden it was dick and balls staring back at me on stage and they had Jimmy here sandwiched. They drowned us all in a sea of pubic smoke.

Drinking on Tour:
JL: One of the first days of a tour we had 150 beers and a bottle of Makers Mark and we were like, “Oh we should be good for a couple days.” Around 4 o’clock that morning we were taking the last sip out of the bottle of Makers and realizing that we had drank all of the beer. We were pretty proud of ourselves.

Boozing with the Boys in Blue:
JL: The Chicago Police Department has taken us out and gotten us destroyed. Last time we played there they brought us out to a bar and got us a private room and were like “Whatever you want.” By four in the morning our bus was leaving and we were like, “Yo, we gotta go,” and they were like “No” and showed up with another three rounds. Chicago’s a big city for us.

Drinking Injuries:
JL: A couple members of the band stood in a circle and passed around a bottle of Bushmills. It didn’t last very long obviously and I jumped from the back of a speeding vehicle shortly thereafter. I broke my wrist. 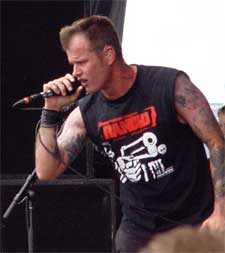 Drinking with Jesus:
JL: You’d want Jesus on your softball team because, you know, when he reaches into the cooler he always gets the coldest Budweiser.

Drinking with Shane:
JL: I had the opportunity to have a pretty long night with Shane McGowan. He didn’t say much, but when he did—it’s amazing, the guy seems out of it all the time but he can have an intelligent conversation with you when he wants to. We were staying at the same hotel and we were sitting there drinking at the hotel bar and the sun was coming up. I decided to call it a night and when I came downstairs the next morning he was still sitting at the same table, still drinking gin and tonics. Amazing.