In the early 60s Woody Woodbury reigned as the High Priest of Liquor Culture.

His headquarters was a famous watering hole in Fort Liquordale (Fort Lauderdale to you teetotalers), where he performed a comedy routine based almost entirely on booze and boozers. He was such a devotee of drink he founded a religion based on alcohol consumption called BITOA, an acronym for Booze Is The Only Answer. The members of this creed called themselves Bitoans and were organized to such an extent that they would travel from cities across the U.S. for group holidays at luxury hotels known to have superior bars.

There was even an official Bitoan publication called Woody Woodbury’s Party Magazine. It included essays on booze, how to throw wild parties, and details of events celebrating the Bitoan lifestyle. There was a regular feature called Booze Nooze, a humor section called Booze, Babes & Bars, and a consumer information section called Shopping With the Booze Hound. The Booze Hound was the official mascot of the Bitoan movement, an iconographic representation of a tipsy canine meant to convey the spirit behind the sect.

Dedicated Bitoans could order plastic wall plaques of the Booze Hound for five bucks (a lot of money in 1961), so their home bars could in effect be transformed into shrines. They could also purchase small pendants shaped like martini glasses bearing the inscription “Member Bitoa,” and framed parchments outlining the reed. When visiting Florida to see Woody perform at the Bahama Hotel, members received a 10% “Bitoan discount” on their rooms. 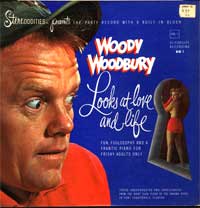 Woody Woodbury may well be the only lounge performer to successfully make the transition to cult leader. Though today we might perceive cocktail comedy as a marginal phenomenon, in Woody’s day it was nothing of the sort. It’s appeal was so widespread it is almost impossible to comprehend in terms of the current culture. Woody’s records sold so many copies they went gold, and in the 60s it seemed like every household with a record player had at least one of his albums. He was a frequent guest on the Tonight Show, and an occasional guest host as well. He even appeared in movies, playing himself in For Those Who Think Young, a comedy about teenagers on Spring Break in Florida.

Woody’s albums are essential live documents of him holding court at his H.Q. at the Bahama, complete with the sounds of catcalls from drunks and the clinking of cocktail glasses. The albums so effectively capture the atmosphere of the proceedings that one can almost smell the cigarette smoke and cheap cologne. In ads for his LPs, Woodbury claimed that playing one of his records would “Turn your house into a Nite Club,” and indeed it does. When the record starts to spin it becomes a genuine time-traveling experience—you feel as though you’re in 1961, the golden age of boozers and bars, a time when albums of cocktail comedy go gold and Mecca was a place called Ft. Liquordale.

I urge every serious sybarite to seek out those recordings and see for yourself why Woody Woodbury is the High Holy Man of Hooch.