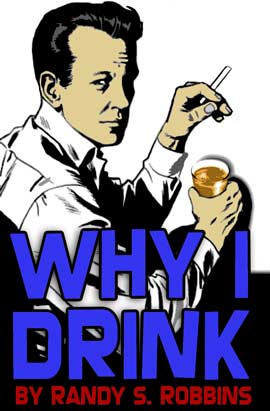 I drink because I have a gambling problem.

Yes, I drink. I’m a drinker. There are many reasons. Do any of them matter? Not really. Not as long as I can get my lips on something that’s gone through the fermentation process. A tankard of ale. A tumbler of scotch. A bathtub of mead. I’m a hard liver. And consequently, I have one. I take my drinking seriously. I get upset when I hear Eric Burdon sing “Spill the wine.” I’ve made arrangements to be cremated and my ashes kept in a Smirnoff bottle. There are many excuses for why I drink. I drink because alcohol makes me feel better. I drink because my local bartender needs to pay off his creditors. I drink because everyone from Bogart to Bukowski to the entire cast of the Bible drank.

I drink because I can’t fly.

I’m drinking right now. I’m writing at a tavern as I research this boozy communique. My research consists of three boilermakers. Besotting myself with drink in the corner of this dingy watering hole feels the natural thing to do. Sometimes liquor bolsters my ego, or numbs assaults on it. Sometimes it elicits speech more readily than I ordinarily offer. Sometimes, like tonight, it fuels my inspiration.

Excepting my own Bris, the first time I ever got drunk occurred rather late in my youth. I was a senior in high school. Believe it or not—for I scarcely believe it myself nowadays—but back then I loathed the taste of beer and avoided it stringently. So I wasn’t draining the keg and stumbling through parties as one might expect. Instead, my first venture over the legal limit involved rum and a shampoo bottle. As a member of the marching band, our troupe journeyed to a competition in Toronto. Naturally, alcohol was strictly verboten on our trip, so one of the boys with whom I roomed filled an empty shampoo bottle with rum. During our first night in the Toronto Sheraton, a container of Prell spelt utter inebriation for we three roomies. I remember giddily dancing in front of the open window, in plain view of dozens of other rooms in the crescent-shaped high-rise. Perhaps it was the madcap disorientation. Perhaps it was the liberation and the flouting of rules. Perhaps it was the taste. But from then on, I never avoided drink. And it is fair to say that by the time I proceeded to college, I was well on my way to graduating magnum cum lager.

The dreamy Serina from Battlestar Galactica flashed into my life on September 17, 1978. No, I didn’t have to look up that date—I’ve remembered it lo these twenty-five long years. I was only eleven and watching the low-budget telemovie for the eye-popping special effects. But she stole the show—and my heart—with her timeless beauty. And come this September 17, I’ll have drank for a quarter-century without the exquisite Jane Seymour.

I once e-mailed Philadelphia’s world-famous Franklin Institute offering my enlarged liver as a companion exhibit to their walk-through heart. I’ve prayed for snow to contain alcohol. Once during a fight, I yelled, “Not the liver!” Sometimes I get drunk and vote Republican.

I drink a lot. My refrigerator is perpetually bristling with beer and my cupboard with schnapps. I spend more than the odd evening on a pub stool. My wallet is ever the lighter for it, but I do enjoy certain returns: Rapidly graying temples and beard; a slight, yet proverbial, paunch; heartburn occasionally intense enough to cause the U.S. Geological Survey concern; countless brain cells forever pickled. I have the suspicion that one day I’ll cut myself and vodka will ooze out. And if a movie of my life ever is filmed, the lead actor will be a fifth of Glenfiddich.

I drink because a black hole at the center of our galaxy means certain death within two billion years.

To be completely honest, I’m not entirely sure why I drink. I’ve given a lot of rationales. I know that for which I seek is not swirling in the bottom of a shot glass. Maybe I drink because the search is too difficult. Or the answer too obscure. But I do know that I drink often. For relaxation. For reward. For washing my worries and concerns into a seasick haze. I’ve had lengthy conversations with the Frangelico monk and often thought he and Mrs. Butterworths would make a nice couple. I fantasize about being run over by a Guinness-dispensing Zamboni. If I ever become engaged, I will register at the local liquor store. In my judgment, giving the gift of life is administering CPR to a bottle of Merlot.

I recall hearing the phrase, “Nothing of lasting import was ever accomplished sober.” But I was probably plastered when I heard it, so I don’t even know if it was an actual statement or just some fanciful notion imagined during one of my stupors. Likely the latter, but the point is that it’s basically true. John Hancock was an American patriot and one of the original signers of the Declaration of Independence, a document that eventually birthed modern democracy and freedom for the Western world. Now take a look at his—the most famous—signature in history and tell me Hancock wasn’t stewed on fellow signer Samuel Adams’ amber gift to the cause when he made that grandiloquent scribble. And Ulysses S. Grant helped preserve our young nation’s very existence by vanquishing the Confederacy while drinking enough whiskey to flood the Potomac. Babe Ruth possessed a lifetime batting average to match his blood alcohol level. And a comic genius if ever there was one, W. C. Fields preferred awakening to a throbbing hangover and no memory of drinking away $20 rather than simply having lost it. I never approached such contributions while on the wagon, so is it any wonder I try to drink until my eyes become Xs? The cure for cancer or the riddle of time travel will most likely be stumbled upon by some Ivy League freshman face-down in the snow after a night of beer funnels. Perhaps it is for such achievement that I hold sobriety in such low regard. Hell, even ex-drunks grow up to be presidents these days.

Whatever the reason for my uncompromising inebriety, it’s nearly closing time here. And as I stagger home pondering my cirrhotic fate, I’m sure inebriation will conjure a few more causes for my present condition. So think of me tonight, under spinning ceiling and dancing walls, and raise a glass to me, the intemperate, unrepentant, rum-scented drunkard. Cheers.

You Know You’re a Drunkard When… Archives