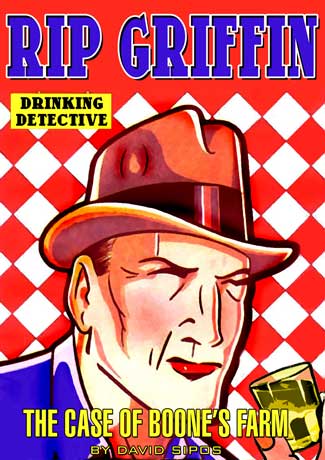 I was driving north up US 34 toward Wray,  CO, sipping from a Big Gulp of Sprite that was half Sprite and half Canadian Club; 64 ounces of scenery enhancer, and this landscape needed it.

My name: Rip Griffin, private dick. A teenaged girl had gone missing and her father had hired me to find her. I’d heard from one of my snitches, a bartender at a hippie dump on Colfax called Dulcinea’s 100th Monkey, that the runaway, a Marilyn Demyonovich, was living on a commune outside of Wray called Boone’s Farm. Clever. I doubted she wanted to be found, much less brought back to Denver, but I was hoping she’d be too stoned to resist. Her father told me if I had to slap her around a little, he wouldn’t complain. Nice guy. I wasn’t too keen on turning her over to him, but I needed the three grand. I figured after I got the cash I could give him a little seminar on child-rearing.

I came over a slight rise and floated down into Wray, an old farming community that was as brown as the manure piled up in the surrounding fields. I needed to find out where the commune was situated, so I looked around for a local watering hole. It didn’t take much looking. They didn’t serve drinks at Taco John’s or Jo-Ann Fabrics, which left the Elks Lodge. I pulled into the parking lot and parked my Rambler between a Ford pickup and a Ford pickup.

The lodge was decorated in cracked vinyl and pitted chrome with a long bar stretching down one side. It was lit like a telemarketer’s boiler room, garish white light from long florescent tubes exposing the occupants’ blotchy skin and general ugliness. There were six or seven guys seated along the bar ,and maybe half a dozen others at booths or tables. They were all wearing flannel shirts and jeans accessorized with ball caps  advertising varieties of farm machinery. Every one of them gave me a good going over as I crossed the bumpy linoleum floor and climbed a bar stool.

The bartender, dressed like everyone else except that his ball cap read “Miller High Life,” came over and leaned on his hands.

“I’ll have what your cap is selling me.”

It so happened I was a card-carrying member of the Elks Lodge, the Moose Lodge, the Lions Club, the VFW, the Hibernians, and every other lodge or club that served 75 cent highballs and 50 cent beers. I showed him my Elks card. He went to a cooler and pulled out a Miller, popped the cap off and set it down in front of me.

“Prices have gone up.”

I took out a twenty and slid it across the bar, but kept a finger on it.
“If you can tell me where a place called Boone’s Farm is located, the change from this bill is yours.”

A guy sitting two stools down looked over at me.

I shook my head. “Private dick.”

“Hell, I’ll give you twenty dollars and a ride up there if you’re gonna go fuck up their day. Buncha assholes.”

The bartender put his hand on the twenty and looked at the farmer.
“I can tell him myself, Shelby.”

“They bought a piece a land next to mine,” Shelby said. “Always high an’  runnin’ around naked like it was Woodstock all over again. Shit, I should know, I was at Woodstock.”

“Christ, Shelby, we all know that story,” said the bartender.

“Met my goddamn wife while Hendrix was playin’.”

“Last week it was Janis Joplin.”

Shelby scowled at the bartender and then said to me, “He don’t know shit, it was Hendrix. Anyway, finish your beer and you can follow me right to them shithead hippie wannabes.”

I followed Shelby’s Ford pickup out of town for about six miles until he pulled over to the side of the road near a dirt track that led up into the hills. He got out of his truck and walked back to my car.

“You just follow this drive up in there and you’ll run into a little spread with an old house and a barn. That’ll be them.”

“It don’t matter, but I just wanted to tell ya I was at Woodstock, but I wasn’t no pot-smokin’ hippie. I just liked guitars and naked girls.”

Shelby grinned at me and I pointed my car up the dirt road.
I drove a little over a mile down the rutted track before I came to the spread Shelby had described to me. There wasn’t anybody near the house, but there was quite a bit of activity in and around the barn. I pulled up in front of the house and six guys tried to look menacing as they left the barn and approached my car. I sucked down the last of my watery CC and Sprite, took out the .357 I had clipped under the dashboard and stuck it in my waistband. I had a small .32 automatic, but I figured a big gun would better impress a bunch of stoners. I got out and stood by my car.

There must have only been one clothing store in Wray because these six were dressed the same as the drinkers in the Elks Lodge. They shuffled to a stop about ten feet away then a big blond doofus took a couple more steps toward me.

“Dude, this is private property. I’ll stop when I want to,” he said as he stopped. “What ya want up here, anyway. You lost? The way back is the way you came in.”

The other long-hairs laughed at this alleged witticism. He turned and grinned at them and then looked back at me trying for mean again. “I hope you’re not a cop,” he said, “cuz cops are not cool with us.”

“Why? Are you cooking meth up here?”

One of the other doofuses laughed. “Meth? Dude, we just grow some chronic, we don’t mess with crystal.”

One of his buddies slapped the back of his head. “Dude, shut up.”
“Look, I don’t care what you do up here,” I said to Doofus #1. “But I do care who you do it with. Like with Marilyn Demyonovich for example.”

“She’s an underage runaway. Her father wants her back.”

“Old dude that owns the next place over took her away. She’s stayin’ at that Elks house or whatever.”

Seemed like Shelby and his Elk buddies still liked guitars and naked girls, too.

I walked into the Elks Lodge and the same bunch of guys were in there but this time none of them looked at me. I climbed the same barstool. The bartender came over and stood in front of me. “Miller High Life?” he asked.

“How about a Russian vodka,” I answered.

Now they were all looking at me. The bartender took out a cold bottle of Stoli, and as he poured me a shot I saw Shelby getting out of a booth and coming toward me as a few of the other guys stood up.

“Leave the bottle,” I said, and turning to Shelby I pulled out my pistol. This time I had the .32; a big gun wouldn’t scare these guys and the bullets were cheaper. Shelby stopped in his tracks and the other guys sat back down.

“Where is she, hippie?” I asked Shelby.

“I’m not here to judge. Just turn her over.”

“Man, we ain’t hurtin’ her. She’s just a fun bag anyway, pump her up and she’s ready to go. We’ll send her back when we’re done.”

“How would your pals like it if you used one of their daughters that way? Of course, you probably have.” I leveled the gun at Shelby’s stomach. “Last time. Where is she?”

Shelby nodded at one of the men. The man got up and went into the women’s toilet and brought out a pudgy blonde girl wearing only panties. She scurried over and hid behind me. I gave her my jacket and grabbed the bottle of Stoli off the bar. “Expect a visit from the Highway Patrol,” I told them. “I’d call the local gendarmes, but one of you is probably the sheriff.”

One of the guys sitting at the bar sighed loudly and took a pull off his beer. I shook my head. “You won’t be the man for long,” I said.

I took Marilyn by the arm and backed out of the bar. US 34 was just as boring going the other way. I took a sip from the bottle of Stoli.

I saw Marilyn eyeballing the bottle as I tipped it back.

“You’re gonna make me face my dad sober? Have you met him?”

I handed her the bottle.