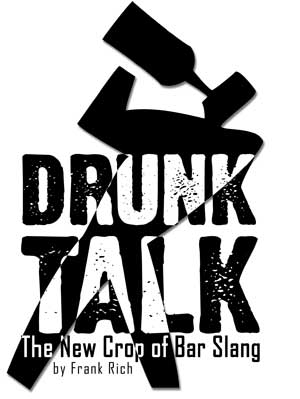 13 stepper   n.  someone attendingAlcoholics Anonymous (usually mandated by the state) while still maintaining a drinking lifestyle; the thirteenth step is forgetting the previous twelve steps.

3 point drag n. a party with at least three stringent rules, i.e.: no smoking, must use coasters, no loud music, etc.

agent 21 n. a person of legal age who procures alcohol for underage friends.

AHP n. After Hours Power; the likelihood you will be invited to stay after hours at a bar.

AWOG adj. Absent Without Saying Goodbye. Slipping out of a bar or party without telling your friends.

alcoheimers n. the inability to remember what happened while drinking the night before.

atkoholic n. a person who drinks low-carb beers, liquors and mixers because he is following the Atkin’s or other high-protein diet.

bar-bar n. a bar with no discernible theme.

barf-lies n. post-vomiting affirmations that you will never drink again.

beer fuehrer n. a beer snob fanatical to the point he would rather drink water than what he considers “bad beer.”

between the devil and the deep spew adj. to teeter on the brink between vomiting and ordering another drink.

blank shame n. the vague feeling of guilt experienced in the aftermath of a blackout, without knowing if you actually did anything wrong.

booze-bonding n. male or female bonding accelerated by the presence of alcohol.

boozing with Bermanv. to get drunk in a bar while watching sports on TV; a reference to ESPN broadcaster Chris Berman.

bungie-shot n. a shot likely to come back up.

calling Captain Nemo v. to vomit into a toilet.

chariot of the mods n. a scooter or moped.

cheat seat n. the barstool nearest to the beer taps, prized because mispours are generally awarded to the occupier; also called the spill stool.

chimp in space n. someone who attempts to talk on a cell phone in a loud bar; from the idea that the chimpanzees sent up in space ships could not communicate with ground control.

cheapdate gene n. a gene that causes fruit flies—and some humans—to more readily succumb to the effects of alcohol.

condive n. a contrived dive; a new bar attempting to appear a dive bar by way of retro artifacts and the sale of obscure old-school macrobeers.

cowboy up v. to order a shot of whiskey.

crime-to-time ratio n. the amount of time that must pass before a certain type of bad behavior will be forgiven at a bar from which one is 86’d.

cybersouse n. someone who gets drunk while surfing the web, sometimes to the detriment of their social lives.

D4D adj. dressed for drinks; adapting your style of dress according to what bars you expect to visit.

drinking with Godot adj. drinking while waiting for friends who may or may not arrive; from the Beckett play Waiting For Godot, wherein the title character never appears.

drunk dial v. to make a potentially embarrassing phone call while inebriated, often not revealed until the call log is browsed the following day.

drunkation n. a trip to a foreign locale with the primary intent of getting drunk in native bars.

following the caper trail v. determining where you drank last night by examining your collection of matchbooks and credit card receipts; also known as pocket forensics.

Foster Brooken it: v. To act more drunk than you truly are; from the actor who often portrayed drunks in the fifties and sixties.

funeral drunk adj. to be depressed while drinking.

go-tard n. an extremely drunk person eager to do something bold and foolish, such as jumping off a balcony or stealing a police car.

hair of the bear that mauled you n. vodka drank to defeat a vodka hangover; an update of hair of the dog that bit you.

halfway to Heavington adj. half drunk.

hipstered n. when a dive bar once frequented by old men is overtaken by a younger, hipper crowd.

hurdling in the Special Olympics v. to trip over furniture while drunk.

in the pinch n. to trade rounds with someone who prefers much more expensive drinks than you do.

jactkins n. Jack Daniel’s and diet cola; favored by those on the Atkin’s Diet; also known as Skinny Jack.

jason n. a drunk who passes out briefly then rises again to drink; a reference to the irrepressible Jason Voorhees protagonist of the Friday the 13th horror film series.

job-sick/bar-well adj. the state of being too ill to go to work but fit enough to go the bar.

juice jacket n. the condition of feeling warmer due to drinking.

kick and click n. A bar that kicks out strangers at last call, locks the door, then serves regulars after hours.

lashed to the past adj. to become very nostalgic while drinking.

Lawford n. an acquaintance you meet for drinks only if more preferable company is unavailable; a reference to actor Peter Lawford, the least likable member of the Rat Pack.

lush money n. a large tip given to a bartender in hopes of making up for bad behavior; from hush money.

Monet v. someone who appears attractive from across the bar, but less so up close.

MVVD n. Male Vertical Volume Drinkers; someone, usually male, who consumes an excessive amount of alcohol while standing up.

nicotini n. a nicotine-laced martini; especially popular in cities that have banned smoking in bars.

nightingale n. someone who nurses a drink for an extended period of time; a reference to the legendary nurse Florence Nightingale.

pal tax n. the act of covertly ordering a drink on a friend’s tab.

pint patriot n. a person who is apolitical while sober and extremely patriotic when drunk; also known as a hooch hawk.

Rat Pack envy n. the haunting suspicion that our fathers and/or grandfathers had more fun than we did.

raver pop n. a cocktail that incorporates an energy drink.

retro defiance n. hostility towards current ideas about healthy living, which includes a return to allegedly non-healthy activities such as smoking and drinking.

Sauced Generation, The n. the 21-45 year olds who have revitalized the drinking culture; a play off their spiritual forerunners, The Lost Generation.

smoke-easy n. a bar that allows smoking in the face of a smoking prohibition; a play on speakeasy.

social lubricantitus n. the inability to enjoy an event without the presence of alcohol.

spacer n. a glass of water or soft drink ordered between rounds of alcoholic beverages.

tile-faced adj. to be passed out on a bathroom floor.

treading lager v. eschewing liquor for beer in hopes of not getting too drunk.

trolling the void v. attempting to piece together a blackout by posing seemingly casual questions to friends who were possibly more cognizant at the time.

underserved adj. drinking but not drunk; a play off overserved.

whiskey under the bridge n. drunken misbehavior whose outrageousness has been diluted by time.

with Bill adj. a drinker who has joined Alcoholics Anonymous; A.A. was founded by Bill Wilson.

work of art v. a secret insult addressed to bartenders who are extremely slow in their duties; the work of art being referred to is a statue.