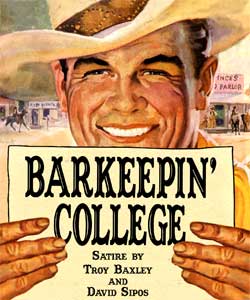 Two weeks ago I woke up drunk under a speckled sow — for the last time.

As the hotel proprietor threw me out the front door, I knew my life had to change on short notice. It was already 1895, I said to myself. What does a young cowpoke need in so far as a career goes, I wondered. He needs to make money, meet new friends, and have fun doin‘ it, dag durn it! I picked myself up from the street, dusted myself off and suddenly felt the urge to find a privy, as last night’s libations were tryin’ to fight there way back to the light of day.

Whilst I was wipin’ the dribblins` of my queasy innards from my chin whiskers, my hazy eye spied a colorful handbill tacked to the shithouse wall. Havin’ never acquired the skills of readin’ an’ writin’ I summoned the first ten or so passersby into the smelly booth with me until I found me a reader.

The fresh-faced school girl explained to me that the handbill promised all your dreams come true by attending a short two-week course at the local Barkeeping College. “It says you’ll make money, meet new friends, and have lots of fun doing it,” she said in her sweet little voice. I laughed out loud as I grabbed her up and twirled her out of the stench and into the sunlight.

“Little darlin’, that there handbill done saved me from a life of poverty, loneliness, and misery! Now point me in the direction of my destiny!”

She pointed a dainty pink finger due east. “It’s in the rear of Miss Jane’s Love-a-torium.” I bid her a heartfelt thanks and headed down the street at a dead run, eager to begin my new life.

I was askin’ Donovan J. Ryerson III, the owner and professor of Barkeeping College, exactly how much schoolin’ it took to learn how to pour a shot and a beer. “It’s nearly the turn of the century, my good man,” the Professor of Mixology explained. “You’ll not only learn how to pour a proper whiskey, but also how to mix the latest San Francisco-style cocktails.“ He twisted the end of his waxy mustache as he pushed the contract across the desk. “We can get you started as soon as you make your mark and hand over your non-refundable tuition of one horse and one saddle.”

It was everything I owned. I felt uneasy giving away my trusty steed TransAm, but Professor Ryerson assured me that I was trading the one-time low, low price of a horse   and saddle for a lifetime of profit, friendship, and good times. I made my mark and tried to imagine my wonderful future as the Professor led TransAm toward the livery.

I was twelve days into my schoolin’ when the Professor approached me as I was polishin’ the same shot glass for the 521st time. He smiled broadly, slapped me on the back and handed me a framed piece of paper.

“Congratulations, dear fellow!” he hollered. “You are an official graduate of Barkeeping College. That is your Bachelor of the Art of Mixology and the Sale and Service of Alcohol diploma.”

I was thunderstruck. “What do you mean, graduate? I ain’t done nothin’ ‘cept practice pourin’ whiskey from a milk bottle full of trough water. My wrist aches so much from polishin’ spittoons I feel like one a Miss Jane’s penny-hand job girls. The only classes we studied was Pourin’ Whiskey, Pourin’ Beer, and How to Water Down Whiskey and Beer. I never even learned what ‘San Francisco-style’ means, let alone pour one.”

“I’m sorry, but we never received the San Francisco-style supplies,” Ryerson explained. “But I will make a deal with you and with you only. When the supply wagon arrives you can take the expanded course for a nominal fee.”

I started to bellyache about the added expense, but Ryerson cut me off, smiling as he twisted the end of his mustache.

“Besides, I would have kicked you loose, er, graduated you early anyway. You are by far the most brilliant student I’ve ever had the privilege of teaching. I guarantee you will be filling your pockets with gratuities of gold by nightfall. Now go, lad, seek your fortune, tipple with new comrades, and above all, whoop it up!”

I gathered up my courage and pushed through the swingin’ doors of O’Herlihy’s Saloon. It was packed to the rafters with an assortment of thieves, beggars, bushwackers, claptrappers and downright drunkards. I squeezed through the crowd and made my way to bar. Behind the bar was a big Irishman I took to be O’Herlihy.

“I was hopin’ to gain employment at this here fine establishment,” I shouted over the din as I handed over my diploma. He took one look at the framed paper then smacked me over the head with it.

“I’ve had enough of these worthless papers handed to me to wipe every arse in Dublin. I wouldn’t hire ya to polish spittoons, let alone pour drinks. In fact, I wouldn’t even let you have a drink in here. Now be gone with ya!”

I left the saloon done fed up, ‘specially since it was the 37th time that day a bartender had hit me over the head with that diploma. It got this cowpoke to thinkin’. O’Herlihy was right: I was a fool. I shoulda never give up ol’ TransAm for some pipe dream. The owner of that damn Barkeeping College talked out the side of his mouth worse than a mule-kicked elixir salesman. I guess it was time to give up and go back to what I do best: live with my parents and sell drugs. But first I reckon I’ll look up a certain speckled sow I used to know.