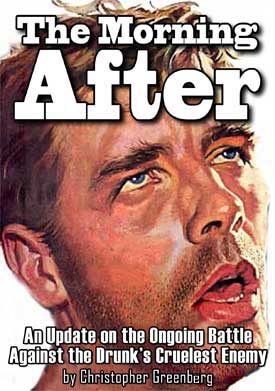 This Public Service Announcement, and accompanying literary dramatization, is brought to you by Active Alcoholics, or AA. We are aware that you may have heard of another organization operating under the same acronym (litigation is currently underway), and we want you to know that we are in no way affiliated with the sorry bunch of quitters and whiners known as Alcoholics Anonymous. While they are hiding, hugging, growing up, and drying out we are busy making this fast-paced world a better and more manageable place for today’s ambitious and Active Alcoholic.

Our hero, Jack, finds himself in a motel room just north of the Canadian border. We are joining him a little after nine in the a.m. after a memorably forgotten night of boozing and gambling. Jack is awoken by a throbbing that is coming on persistently like an elderly woman selling single roses for his “lovely lady” as they stroll hand in hand through Times Square (or Leicester Square or as they sit in an Irish Pub sipping cervezas somewhere in the south of Spain). Almost immediately he recognizes the small irregularity of the rhythm, the drumming of a boy with a limp in a high school marching band. His eyes are forced shut from fear that the sunlight, which he can feel warming his bare back, will slide a scream, moan, yelp, or other utterance through his loosely clenched teeth. His teeth are clenched reflexively against the headache that wants nothing more than to be called Hangover.

What is our hero to do? Should he try to go back to sleep? Should he admit defeat?

The heat daring him to open his eyes assures him that the sunlight is coming in bright and strong through the unnecessarily huge, and obviously voyeur-friendly, windows of the motel room. For Jack (and ultimately for us all) movement has to occur sooner rather than later. The day is begging to be acknowledged and our hero’s bladder is urging him to move his moment of introspection to the bathroom. Nevertheless, more intruding and worthy of his immediate attention is the ashtray whose smell places it too few inches from his face. This ashtray would appear to a civilian as an ordinary fast-food beverage cup. However, Jack (like any card-carrying Active Alcoholic) is able to identify it and avoid knocking it over despite its strategic placement.

The feel of the cold tile soothing the cigarette burn on the sole of his left foot lets our hero know that his pilgrimage to the bathroom is complete. As his eyes adjust to standing he finds the seeds of his earlier labors bearing fruit; the Holy Grail at the end of this Crusade is not made of porcelain. Two small, maroon single-serving foil packets of Excederin Migraine tablets lay illuminated on the rim of the sink by the single ray of sunlight coming in through the small window high on the bathroom wall. The light was (n)either accusatory (n)or congratulatory: the light just was. The medicinal tablets had been placed there, along with one complimentary, plastic-wrapped, plastic hotel cup, prior to Jack’s departure for the casino the previous night. One of the packets is opened. The contents of that packet (in keeping with AA mandate 7/subsection b) had been ingested shortly before Jack succumbed to slumber. Jack has shown himself to be both upstanding and considerate by remembering to leave both night and morning doses at an unavoidable location. The morning’s allotment is taken with a tall glass of lukewarm water because anything of too extreme a temperature would have provided an unnecessary shock to the system. Jack knows this. Therefore, Jack is our hero. His sigh, resulting from the successful completion of some integral morning activities, sounds like a pile of charcoal briquettes being shaken in a bag lined with sandpaper.

What is next for our hero? Can he go back to sleep now? Has Jack already won?

Leaving the bathroom he is finally able to survey the scene: the structural damage is minimal although the human cost seems rather high. Passed out on the television rests an empty case of Molson Ice filled with the remnants of an alarming number of fast-food wrappers. Only now does Jack recall the calculated staggers of the late-night poutine (poutine, for those of you not familiar with Canada’s delicacies, is cheese fries and gravy) run over to Burger King. Meanwhile, every level surface is covered with empty bottles. Each of them contains approximately one captive cigarette butt. Ron and Morgan lifelessly lay head to toe on one of the room’s two beds.

“Cigarette?” finds Jack standing statuesque and epic amidst the debris. This is simultaneously a question, an order, and a prayer (that he might somehow reply with a negative answer). Our champion hears a “yeah” before the part of the brain where he hears himself, the part that always hates the way he sounds on answering machines, even knows that he is speaking.

“Hurry up. You got the lighter and I’m almost able to breathe again.”

Looking up and stepping over the foldout cot that had been his final resting place last night, Jack sees Daniel leaning against the door. Jack and Daniel both know that they must go outside, smoke a cigarette, and make plans for motion. They both know that stillness and silence are the ways of the defeated and the habits of the dead. Reaching into the pocket of the brown dress pants that he’s still wearing from the night before our hero fingers the lighter in his pocket and notices the tender spot on his thigh where it has been pressed into his skin as he slept.

“Sorry I’m not really awake yet. Good call with the sunglasses.”

Jack commends Daniel’s attention to detail because the sunglasses are crucial to surviving the inevitable evil that is one’s first direct exposure to morning’s sunlight. A bottle of rum wears Jack’s sunglasses like a Christmas tree wears its precious star. Through them he finds the familiar orange and red box that holds his cigarettes. Suicide is available on the installment plan for those like Jack (and like Daniel and maybe even like you) who can’t really commit to anything, but still have a type of general dissatisfaction with life; the type of dissatisfaction that could cause the more brash and motivated to swan dive off the world’s skyscrapers and suspension bridges. Soon the regularity of inhalations and exhalations allows our fearless captain to bring his thoughts into cohesion. Looking at Daniel he sees that his first cigarette, although with him you can never assume that he wasn’t smoking in his sleep, is settling him as well. Still, the squint lines crawling out from behind his mirrored singlasses (or sunglasses as the uninitiated may call them) along with the way his cigarette bobs in his Ali-grasp make clear that desperate measures still need to be taken in order to salvage this day from the restless Hangover slumber. For Jack that scenario is unacceptable because he believes (like all of us here at Active Alcoholics) that one should always enjoy oneself no matter how close to death one feels.

What type of desperate measures must our hero resort to? Can he escape the seeming doom? Will Jack enjoy himself?

“What’s the plan after this cigarette?” Jack’s voice is shaky, but steadying like a boxer regaining his footing after a left hook catches him a little off guard.

“I don’t know, but if I go back to bed this day is fucked. We need coffee . . .” Daniel pauses and puts out his cigarette with the latent hostility that is somehow related to binge drinking, “. . . coffee with a little bit of rum!?” He asks/orders with a smile so contagious that even Jack’s liver knows this is the right thing to do.

“Good call, but then we go across the street for a beer to wash any of the Hangover’s remaining temptations. Then we’ll come back here to wake up everyone else.”

Jack and Daniel both know that their course of action is the only guaranteed way to save the day (as heroes are want to do), but they also know that the odds are staggeringly against them convincing anyone else of this without resorting to fisticuffs.

“After that beer, then we go start gambling.”

“We gotta follow procedure: first the beer, second the eating, and third the gambling. We also can’t forget the screwdrivers at the casino.”

“Of course not, we’ll be ordering the drinks directly from the table.”

“Blackjack?” Jack asks this only as a formality because already the wheels in both their heads are in motion and all are moving along the same track. Still, a shadow crosses Jack’s resolutely clouded eyes as he detects a snag in the plan.
“Are you gonna make the coffee?” He asks this hopefully.
“No,” Daniel’s answer is both logical and stern, “with the water and the glasses and the sugar and the stirring it seems like an awful lot of work for one shot of rum.

The pace quickens as the determination thickens; moving back inside there is a newfound urgency to Jack’s movements.
“I like this plan. I’m glad to be a part of it. What movie?”

“C’mon, it’s too early.” Daniel is just as annoyed with himself for not knowing as he is with Jack for asking.

“Ghostbusters. Bill Murray says it at the end when they decide they have to cross the streams.”

“Yeah, well I would have known if it weren’t so fucking early.”

“Or if you weren’t still half-drunk from last night.”

“Fuck you and fuck the crossing streams. Let’s just cross the street and get that beer.”

Another battle has been won thanks to our hero’s adherence to a few of Active Alcoholics most important tenets and our earnest commitment to combatting sobriety and its nastiest of henchmen, the Morning After Hangover. Once again this paid message has been brought to you by the real man’s AA in association with FICTION who would like to remind you all that sometimes lying is the best way of telling the truth. So don’t forget to designate a drinker and to think responsibly.