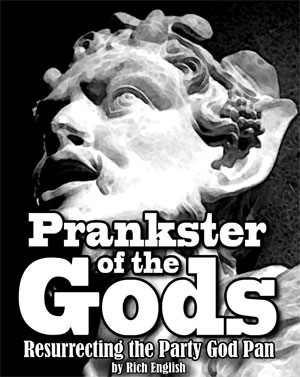 No verse can give pleasure for long, nor last,
that is written by drinkers of water.
—Horace

People drink for lots of reasons— escape, relaxation, to catch a giggle, recklessness, to bolster self-consciousness, or even for spiritual purposes. Some of us, professional recreationalists and tenured revelers, use strong drink as a philosophical statement. We are hedonists, living life for the sole purpose of wallowing in its myriad pleasures. Sex, Booze, and Rock-n-Roll, to morph a phrase.

Across the political spectrum, hedonism is treated poorly. Conservatives get twitchy because alcohol consumption engenders amorality. Centrists dislike tipsy pleasure because it runs afoul of the brainless careerism they depend on to excuse their fear. Liberals look askance at overindulgence because regular intoxication suggests a lack of seriousness regarding social justice (whatever that means). Yes, we blur-hounds are treated much the same way Don Corleone treated Carlo Rizzi; which is to say we are ignored until we get uppity, then they send Clemenza to swiss-cheese our heads with a pistol.

Western society demands strict adherence to traditional norms. Step out of line and you’ll land in the hoosegow or, even worse, enrolled in a Federally Mandated recovery program. Either you behave like we do, growl the teetotalers, or there will be repercussions. Get off that barstool and participate in the Dream. America’s motto, “The Land of the Free” might as well be changed to “Straighten Up and Fly Right”.

Throughout history, squeaky-clean cabals have designated themselves the Keepers of Propriety. At the same time, the past has sizzled with the counter-energy of folks who stood up and said, Hey, Mr. Holier Than Thou, Ms. Scion of Tradition, Mr. Dictator of All That Is Good and Right, you know what you can do with your opinions? You can, to borrow from The Rock, shine ‘em up, turn ‘em sideways, and shove ‘em straight up your candy ass.

Our lives are our own. This foundational freedom is wasted on people who won’t take it and run. Individuals are free only insofar as they choose to act that way. “Societies” are never free. If you believe “society” is a good thing, then act accordingly. On the flip side, if you know (and how could you not) that a “free land” is possible only when each individual member is willing to slam the fuckin’ thing into Drive and GO, then you are not alone. Like liberals have toxic jurisprudence, and conservatives have “Seventh Heaven,” we hedonists have a mythology of our own, symbolized by a mythopoetic demi-god who loves a good drink and frowns on those who would keep him from it.

He is the god Pan.

Pan (born of the god Hermes and a magical woodpecker) was the foster-brother of Mighty Zeus, but never took a seat on Mt. Olympus. He didn’t want one. Pan, our proto-spiritual Energizer Bunny, chose (exercising his freedom, you see) to live his life on Earth where he had all he needed and could pursue his every whimsy.

He was ugly, hairy, and flighty. Blunt horns grew from his head. His legs were those of a goat. Apart from his cousin, Priapus, his tallywhacker was the most impressive in the ancient world. He loved drink, music, and sex – usually in some combination. Once, while hornier than a ten-year convict, he attempted to ravish the nymph Syrnix. She fled and he chased her across half the known world, yearning for a taste of the Nymph’s sweet demi-god poontang. Syrinx transformed herself into a reed and hid amid the thousands growing along the River Ladon. Unable to tell one from another, Pan chopped down a whole armload but never did find Syrnix. Feeling melancholy, he fashioned the cut reeds into the musical instrument that bears his name – the pan-pipe.

Pan, with his cloven hooves, horns, tail, and a libido that made Slick Willie look like a castrated monk, was not at all popular among the Olympic Dozen; the twelve gods who ruled the heavens. What could twelve murderous, incestuous, patricidal, wrathful, neurotic deities possibly find to loathe about Pan?

They frowned on His Devilishness because he was easy-going, slothful, frequently blitzed out of his head, and interested only in pleasure. He was a hedonist – the original, in fact – and the Olympians (usually more interested in hierarchical struggles and weird acts of revenge than their omnipotence), found his behavior unseemly. I can only suppose that, in the minds of the Big Twelve, spontaneous napping played second-lute to fiery anger and dressing up as a swan to steal a piece of mortal ass.

Which do you find more appealing, deceiving people and then killing them when they don’t get the joke, or tipping a wineskin and sinking into a midday siesta under a tree on a day where the sun seems like your own special friend? Which seems more truly divine, getting cheesed because some mortal lady weaves better than you, or drinking mead and chewing ivy leaves at sunset, then pan-piping a tune to the clouds? I don’t know about you but I’d much rather be sozzled and randy with a bunch of naked Maenads than getting my divine undies in a twist over who gets to win the Trojan War.

Our hedonism, our ability to drink, doze, play music, dance, and fornicate is, in addition to being a whole hill of hoots, an antidote to the enfeebling, tedious regulations currently infecting our world.

Say you work for a big corporation, in a big, windowless, concrete building, and despise the hours you spend in a cubicle so small Calista Flockhart’s tits would get chafed. Let’s say you regularly use words like “metrics,” “needs of the business,” “architecting,” “deliverables,” and “action item” in your everyday speech. Furthermore, let’s say you’ve recently been “reallocated,” or been added to the roster of the “negatively resourced,” or told to “elevate your opportunities.” And, on top of all that you get to suffer through “team-building potlucks,” “increasing your personal effectiveness” training, and “Wacky Hat Day.” Structure, structure, and more pointless structure. In Corporate America even wackiness is proscribed.

Kenneth Lay ripped off his employees because he never met Pan. Rush Limbaugh debuted a line of neckties because he never met Pan. The characters on “Friends” are more irritating than a scrotal rash because they’ve never even considered Pan. Neo-Prohibitionists are able to gang-rape the Constitution because they deny and avoid the gentle, pastoral glory that is Pan. Cancer is an effective killer because it is patient. It invades one cell at a time. You have a choice. You can enlist in the Disease Militia, or you can declare yourself part of the antidote. Laws beget more laws. It remains to be seen if freedom is so easily replicable – so few have tried we have no accurate data. Shit, inference is a chore in this case.

If you sense the magic of intoxication, feel the majesty, right in your marrow, of a long nap, and understand that an erection is equal parts Divining Rod, Compass Needle, and Teleportation Device, then stand tall. Get right up on your cloven hooves and bust a move. Honor the Pipes. Sing in your own private language. Ditch your stupid job and, when you’d ordinarily be sending email, have a snooze instead. Find some Maenads and tickle their fancy. Throw a party on Monday afternoon – call it a saturnalia – and drink until the stars blur into a splash of Goddess Milk.

Your cubicle will be there on Tuesday. You, on the other hand, might not be if you don’t adjust to a new gaze.