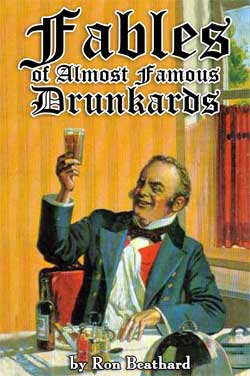 The Fatal Phone Call
Henry Peepindrink of Ashtabula, Ohio, invented the telephone in 1847, two years before Alexander Graham Bell was born. Peepindrink was a tinsmith by trade and had a laboratory above his shop where he tinkered and tippled. He tinkered best with toddies and tippled till tipsiness set in.

Peepindrink’s first words over the world’s first telephone were, “My wife is a muscle-bound cow.” Unfortunately, his wife, Marta, owner and operator of Marta’s Blacksmithing Shop and part-time tow horse on the Ashtabula Canal, was not amused. She dropped a 100-pound keg of whiskey on the telephone and Henry Peepindrink.

A Fable of Funny Money
Paul Daugherty was Treasurer of the United States during Grover Cleveland’s second term. The Treasurer’s main duty, signing paper currency, sometimes proved boring for Daugherty. And he turned to drink. A short turn.

A never empty crystal decanter of the country’s best bourbon stood proudly on the credenza behind him. “Helps with stiffness in the fingers,” he explained. “Stops the shaking, gotta have a legible signature. It’s my duty for my country.”
Sometimes his duty proved mischievous. “All work and that rot,” he dabbled. When he tired of making paper airplanes from one-hundred dollar bills and sailing them out the window, Daugherty would draw a mustache on the face of George Washington, or hair growing out of Abraham Lincoln’s nose.

In 1896 the national economy experienced a mild recession after Daugherty, in rare spirit even for him, instead of signing his name to 1,147,786 twenty-dollar bills, wrote “This is counterfeit.”

Daugherty was certainly the funniest Treasurer the country ever had.

Moral: You can fool too many of the people too much of the time.

If It Moves, Salute It
At the Battle of San Juan Hill in 1898, when the tides of war were turning against Theodore Roosevelt and the Rough Riders, General Sherman Pittman, with a firm grasp of the situation and on a stoneware jug of corn whiskey, rallied his men with these slurred and stirring words: “What? There are no flags left? Then run Murphy up the pole.”

Moral: It’s not easy being a Murphy.

Melba’s Last Toast
Melba Bergen was a copywriter, a struggling copywriter in the Big Apple who came close to the fame she craved. During working hours Bergen wrote advertising copy for pills that cured diseases she had never heard of, and medical treatments for parts of her body she didn’t even know she had.

But in the quiet moments of her evenings Bergen wrote for her Muse—the toast. Bergen wanted to be the Toast Queen of Madison Avenue. Her first toast was good but lacked a certain God knows what: “Here’s wet dirt in your eye.” After auditioning her toasts at neighborhood bars, cocktail parties, bar mitzvahs, hospitality rooms, wedding receptions, and happy hours Bergen wrote more toasts: “Up the hatch” and “Through the mouth and over the gums, watch out ulcer here it comes.” She came close to fame with “Here’s looking at you.” Disappointment cannot begin to describe Bergen’s feelings later when she heard these words of another: “Here’s looking at you, kid.”

Moral: Coming close counts in horseshoes—not in getting drunk.

Horace’s Pigeons
While strolling through New York City’s Central Park one afternoon in the late fall of 1958, Horace Rimshoat, long-time resident and longer-time sot and pigeon fancier, thought up the Theory of Evolution. He’d spent years observing pigeon traits from the window of his local pub, noticing how four-legged pigeons were born only to four-legged parents and that the barmaid didn’t like pigeons at all and sometimes called them names.
Recognition was denied Rimshoat because, as the publisher to whom he took his theory told him, it had already been thought of. To which Rimshoat, full of spirit, replied tightly, “Well, it’s the first time I thought of it.”

Moral: It’s not what you do, but when you do it.

The Story of Maudy’s Slide
The flagpole on which Maudy Marstead almost set the Guinness record for sitting on stands at Hank and Webb Greaser’s Super-Val Service Station in downtown Hazard, Kentucky. Maudy had lost a barroom bet. For years the stocky, but spunky Maudy had lost barroom bets six nights a week at Hank and Webb’s Dew Drop Inn, but continued betting with vim and vigor and vodka. After her last bet Maudy discovered she could not drink through her nose and mouth at the same time (a sure timesaver if she ever saw one) but lost the bet and was cherry-pickered to the top of Hank and Webb’s flagpole.

To keep up her spirits spectators threw bottles up to her. Many of the them flew over her head, hit her in the face, or slipped just outside her trembling reach. After seven days her husband yelled up to her that her prize brood sow had just given birth to a two-headed pig, Maudy slid down the pole and bought drinks for everyone.