In this age of heightened security, it isn’t only dusky foreigners who need worry about being hassled. 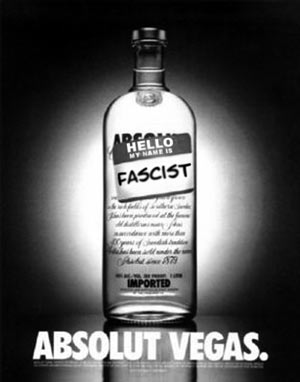 or example, while attending the Bar and Nightclub Convention in Vegas, we managed to get barred from the Absolut Vodka party for the crime of representing a magazine about drinking. Which is akin to an arms manufacturer kicking the NRA out of of a weapons show, because, you know, the pen is so much more dangerous than the assault rifle.

What’s even more disturbing, Absolut’s heavy security seemed primed for our arrival, they needed to only glance at our press credentials to realize we were evil. Here’s how it went down:

“What’s that say? Drunkard? No. Get out of here and don’t come back.”
“Why?”
“Because you’re not wanted here. There will be no drunkards here.”
“What are you talking about? Look at the crowd. They’re mostly bartenders, and bartenders are notorious drunkards. Half of those fuckers are already hammered. Hammered on your crappy vodka, which you’re pouring down their necks for free.”
“Do I have to call the police?”

No, you goddamn fascist, you don’t have to call the police. To irk them, we passed out hundreds of magazines to conventioneers walking into the party. At first security tried to stop them from bringing in the issues, then backtracked when a growing group of hasslees started wondering why the literature they were carrying was any of Absolut’s business.

So, according to folks over at Absolut, manufacturing and selling alcohol is perfectly fine, but actually promoting the drinking of the stuff is strictly verboten.

It’s a sad sign of the times when liquor companies start goose-steppng alongside the prohibitionists, when the dissemination of free information is viewed as a threat to production and profit. These are the same brand of Quislings who, when the Nazis started marching on Paris, declared they had admired those loveable brown shirts and their kooky antics all along.
Frank Kelly Rich

News from the Front: The Great Uncertainty

The Bipedal Booze Suckers of Terra