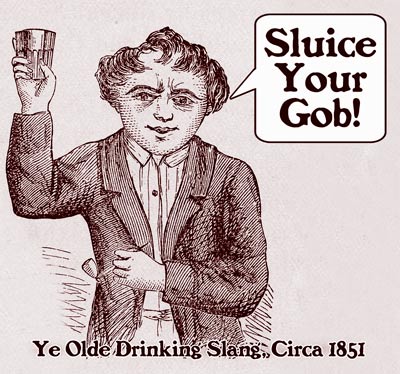 ADMIRAL OF THE NARROW SEAS. One who from drunkenness vomits into the lap of the person sitting opposite to him.

A BUCK OF THE FIRST HEAD. One who in debauchery surpasses the rest of his companions.

CAT HARPING FASHION. Drinking cross-ways, and not, as usual, over the left thumb.

CHIRPING MERRY. Exhilarated with liquor. Chirping glass, a cheerful glass, that makes the company chirp like birds in spring.

CLEAR. Very drunk. The cull is clear, let’s bite him; the fellow is very drunk, let’s cheat him.

CUP OF THE CREATURE. A cup of good liquor.

CUT. Drunk. A little cut over the head; slightly intoxicated.

DRAIN. Gin. So called from the diuretic qualities imputed to that liquor.

DUTCH FEAST. Where the host gets drunk before his guest.

DRUNK AS A WHEEL-BARROW. Clumsily drunk.

DRUNK AS AN EMPEROR. Ten times as drunk as a lord.

ENSIGN BEARER. A drunken man who is red in the face.

FLYING THE FLAG OF DEFIANCE. Signifying the man is drunk, and alluding to the redness of his face.

FLASH THE HASH. To vomit.

LUSH AT FREEMAN’S QUAY. To drink at another’s cost.

GUTTING A QUART POT. Taking out the lining of it: i.e, drinking it off.

GUZZLE GUTS. One greedy of liquor.

HORSE’S MEAL. A meal without drinking.

HUCKLE MY BUFF. Beer, egg and brandy, made hot.

IN THE GUN. Drunk, loaded.

JOLLY DOG. A merry facetious fellow; a bon vivant, who never flinches from his glass, nor cries to go home to bed.

ISLAND. He drank out of the bottle till he saw the island; the rising bottom (punt) of a wine bottle, which  appears like an island in the center before the bottle is quite empty.

MASTER OF THE WARDROBE. One who pawns his clothes to purchase liquor.

SUCK THE MONKEY. To suck or draw wine, or any other liquor, privately out of a cask by means of a  straw.

PISSES MORE THAN HE DRINKS. One who boasts without reason.

SHITTING THROUGH THE TEETH. Vomiting.

SHOOT THE CAT. To vomit from excess of liquor.

STARTER. One who leaves a jolly company, a milksop; he is no starter, he will sit longer than a hen.

SURVEYOR OF THE HIGHWAYS. One reeling drunk.

SWIZZLE. Drink, or any brisk or windy liquor.

TENANT AT WILL. One whose wife usually fetches him from the alehouse.

WRAPT UP IN WARM FLANNEL. Drunk with spirituous liquors.

Source: 1811 Dictionary of the Vulgar Tongue by Captain Grose