Brian Brushwood practices a trade that could perhaps best be described as “benevolent deception.”

As the writer and host of Revision3’s Scam School show, Brushwood roams the country using clever bar tricks to score free drinks. Each episode of Scam School (“The only show dedicated to social engineering at the bar”) involves the gregarious, spiky-haired Brushwood convincing a group of unwitting bar patrons to agree to a seemingly straightforward challenge — the outcome of which invariably results in the participants being duped (usually by their own assumptions and expectations) and begrudgingly buying Brushwood a beer.

It’s all in good fun, however, as at the end of each Scam School episode, Brushwood (a professional stage magician) reveals to the conned drinkers just how he managed to deceive them, and how they too, as well as the show’s audience, can make use of these same simple tricks to score free drinks.

Modern Drunkard: Where did the concept for Scam School come from and how did you manage to convince a production company to get behind the idea of a show about using simple tricks to weasel free rounds at bars?

Brian Brushwood: I noticed that bar tricks were extremely popular on YouTube, with views well into the millions, yet the quality of both the tricks and production seemed pretty awful to me. Those revealing the tricks often wouldn’t even speak or show their faces, so I figured that some well-produced tutorials, shot out on location and hosted by someone with personality might be a success. Originally, I was going to shoot and produce them myself, but at the last minute thought maybe someone would actually pay for this kind of thing. After shopping it to a few online networks, Revision3 bit first.

MD: In all the episodes I’ve seen online, bar-goers seem to be pretty good sports about being deceived; even when you’ve managed to get them slamming their skulls on tables to knock imaginary quarters off their foreheads. Has anyone ever reacted poorly to one of your scams? Any drunken louts swinging fists or anything like that?

BB: Not yet, but that’s part of the challenge: picking your targets wisely.

MD: Have you caught any flack for teaching drinkers how to break out of handcuffs and slip out of zip ties? Or for likewise bypassing various types of locks? Those seem like invaluable skills, to be sure, but I could see The Man frowning upon your passing on of such tricks to legions of drinkers.

BB: Strangely, I found out that some of NYPD’s finest are fans of the show! When we did the “break out of handcuffs” episode, I knew the folks over in the cyber-crimes division would be watching. Fortunately, they seemed to only be mildly annoyed.

MD: Which Scam School trick is your favorite, and why? 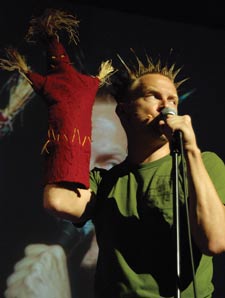 BB: Tough question, but I think I’m most proud of the “Mind Control Scam” from Episode 28 — mainly because it was a totally original idea of mine that nobody understood when I tried to explain it. It was only after a full week of tedious filming, editing, post-production, and uploading 104 videos, that the trick actually worked. It’s now become my favorite stunt to pull on people.

MD: What percentage of the Scam School tricks are your own creations, and what percentage are variations on older tricks that newer generations of drinkers just aren’t generally aware of yet.

BB: The Mind Control Scam is 100% original, but some of the other bits are based on concepts that are hundreds of years old. For those, my job is to try to find new, relevant presentations that would actually play at the bar. Other scams are actual street hustles still being used by criminals to this day.

MD: A lot of people are very critical of alcohol for an assortment of reasons, but — their various grievances aside — I see a lot of positives to be found in bar culture. Do you think that part of the reason your show works so well has to do with the kind of amenable social environment that only bars can provide? Do you think that people would likely be more or less receptive in a different context?

BB: That’s an interesting question. I’m certain that the human element we get from shooting in the bars is a big part of what has made Scam School successful: we grab real people, perform the tricks for/on them and get honest reactions. The response is usually positive and fun to watch, but there have been a couple of train wrecks, tricks I thought were home runs, but when we tried to shoot them at the bar, discovered that they just wouldn’t work in real life.

MD: I understand that, aside from bars, you also do a lot of shows at colleges. Do you find that the university-educated folks are generally more, or less, susceptible to falling for simple, real-world dissimulation than Average Joe bar-goers?

BB: Depends on the student, but as a group, you have a lot of confident young adults who really feel like they’re smart (or getting there) and that’s pretty much the perfect situation for someone looking to scam a few free drinks at the bar. As long as you keep them entertained, college students will keep hooking you up with free booze all night long.

MD: It seems like a lot of the effectiveness of magic tricks is hinged on exploiting the flaws in people’s perception, and their expectations and assumptions about the world. Since alcohol alters perception (and often enough, expectations and assumptions related to one’s own abilities), does that change the equation for a magician? In other words, is it easier to deceive drunks because they’re distracted and thus aren’t really paying attention to all the details of what you’re doing; or is it easier to deceive sober people because they’re actively trying to pay attention to all the details, and thus are convinced that they can’t be fooled?

BB: The latter is absolutely true for the first two to three drinks; then the alcohol loosens people up, makes them more willing to take risks, and generally more interested in participating in a new experience (the impaired judgment doesn’t hurt, either). But once someone’s had too much to drink, they become unable to focus and prone to interrupting your performance or trying to flat-out ruin your work. Once they cross over that line, it’s usually time to turn your crowd against them with gags like “The Funnel” or “Quarter On Forehead.”

BB: I went to James Randi’s annual skepticism convention “The Amazing Meeting” last summer and discovered an entire culture of skeptics who promote meeting at bars and “drinking skeptically.” I thought it was a great way to combat the skeptic’s image of being a stick-in-the-mud and make critical thinking a fun, social experience. They even have a website up to find local groups.

BB: Maybe it’s because pubs are traditionally the home of good-natured arguments? Sometimes it takes a drink or two for people to get the courage to honestly speak their minds.

MD: Tell us a bit about your book, Cheats, Cons, Swindles and Tricks: 57 Ways to Scam a Free Drink. What inspired you to write it, how does it differ from the Scam School show, and what was the impetus behind your overarching compulsion to never pay for your own goddamned drinks?

BB: Cheats, Cons, Swindles, and Tricks was the original basis for Scam School, and as of now, I think a little more than half of the tricks in the book have been made into Scam School episodes. Originally, I just wrote the book so I could look like an expert at something (collecting my favorite bar tricks into a short book wasn’t exactly rocket science), but I’ve been really surprised and thrilled by the response it’s gotten. To this day, I’ll still send out a free copy to anyone who asks for one, as long as they’ll cover shipping. As for my insistence on not paying for my own drinks: come on, it’s the principle of the thing! It’s the thrill of the hunt, a little real-life drama to see if I can really trick someone into hooking me up for free. It’s a helluva fun game to play. ¸