From Tatarstan to Kyrgyzstan to Tuva, in what used to be the great thirsty interior of the Soviet Union, Central Asian nomads have the right idea: kymyz.

Without question the world’s finest alcoholic dairy product, kymyz is a toothsome brew of fermented mare’s milk, and the intrepid inebriate who finds himself in these far reaches would be a fool not to embark on a kymyz-tasting tour. Scenic and relatively accessible, Kyrgyzstan is the ideal destination for the kymyz-curious. Direct flights from Istanbul, Baku, and Moscow deposit the daring drinker in Bishkek, the capital city, from which the heart of kymyz country is but a short hop away.

The enterprising Russians long ago introduced the tribes of Central Asia to the blinding blessings of vodka, and it’s never too early in the day to get nuked on the nectar of the potato in these parts. But in the face of this alcoholic imperialism, kymyz has maintained its hold on the boozer’s bowl in the nomad’s yurt (the traditional portable tent of Central Asia). It’s not hard to see why. The stuff is healthy, full of the same vitamins that allow foals to gain up to four pounds a day, and was once used as medicine for tuberculosis patients. As far as taste is concerned, though first experiences with kymyz draw comparisons to sausagey milk or rotten ranch dressing with just a slight hint of tinfoil, the refreshing sour tang of a good vintage quickly becomes the perfect way to end a hot day. Or begin it, if that’s your thing. And as it is the gravest of insults not to invite passers-by into the family yurt for a taste of the homebrew, you’ll find yourself a connoisseur in no time. 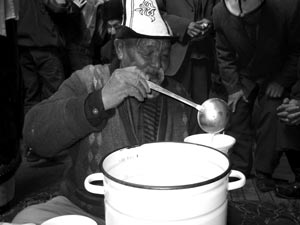 Like a fine wine, a lip-smacking kymyz is the product of both terroir and artisanship. Altitude is key: the best kymyz comes from northern Kyrgyzstan’s jailoos, rich pastures 8,000 to 10,000 feet above sea level, where herders spend the summer. At lower elevations, the taste of the grass and the mix of herbs and wildflowers in a mare’s diet produce a disappointing libation barely worthy of the name, while higher elevations are just too cold. Soil, geology, mesoclimate, and aspect undoubtedly play a part as well, though little systematic work has been done on the matter. As for artisanship, each family tweaks the simple recipe in its own way, adding special herbs, barley germ, a little cow’s milk, or sugar for the weak-kneed. Yeast starters are jealously guarded and cultures kept alive all year, and the special horse-leather sack in which the drink is aged, the saba, is among a herder’s most-prized possessions. Keep in mind that the taste of a given batch changes as the drink ages, starting out sweet and tangy and finishing the season a riot of unholy gustatory explosions in the sinuses.

Popular acclamation places the finest kymyz in the Suusamyr Valley of Central Kyrgyzstan, 90 km south of Bishkek (which, incidentally, is probably the only capital city in the world named after booze paraphernalia: a bishkek is the stick used to stir the ripening milk; up to 3,000 stirs per day to ensure evenness of fermentation). Nearly every car on the nearby highway stops at roadside stalls for quick rounds and a liter or two to bring to parched city-dwelling relatives. Here the elixir comes from jailoos to the east, where enterprising gentlemen in 4-wheel-drives make weekly stops at remote yurts, filling 55-gallon drums with the fresh stuff.
But the best way to hit the horse-juice is on a horse of your own. If you’re not feeling up to dropping a few hundred dollars on a mount at the cutthroat animal bazaars, local travel agents can outfit you with a horse and guide for as little as $30 a day. Arrange your trip in Bishkek or in villages closer to the action, like Kochkor, its main street lined with kymyz vendors, or Barskoon, on the south shore of Lake Issyk-Kul, one of the largest mountain lakes in the world and the quintessential Soviet resort destination. With a little effort, it’s no trouble at all to arrange a week-long tour into the hills, stopping each night at a different yurt to stay with a different family of herders and sample the kymyz.

Feeling like a favored steppe-child, you’ll crest the horizon atop your steed, sitting skylit against the vermilion of the setting sun, thirsty after a long day’s ride. The woman of the yurt, an apple-cheeked descendent of perhaps Genghis Khan himself, sees you and rushes forward through the waving grass, a bowl of kymyz in her upraised hand. You sit upon your horse and drink deeply. You dismount, and the windblown, Fu Manchu-ed patriarch, legs bowed to perpendicular from years in the saddle, comes to join you for another cup. Even if your Russian is rusty and your Kyrgyz nonexistent, in this moment you understand each other perfectly. With a wipe of the lips and a sigh of contentment, you speak the universal language of alcohol appreciation fluently.

Be forewarned, you’ll have to lay into vat of kymyz to get canned. Even a strong batch tops out at less than 3% alcohol (though some groups, like the Tuvans of Russia and Mongolia, distill theirs into a stronger potion called araka). If, like the locals, you’re low on aldehyde dehydrogenase 2, your so-called “Asian flush” means you’re all set. For the rest of us, not to worry, vodka runs 60 cents a bottle.

Though recent efforts have been made to industrialize the kymyz-making process, even the best bottled kymyzes available in Bishkek, under the Sayak brand name, bear little resemblance to the real thing. And absent a dramatic increase in horse-milking elsewhere, or advances in fermented-dairy transport, it’s going to be a long time before real kymyz is available outside of the region. So fill your flask, pack your bags, and book your ticket for Kyrgyzstan to sample this powerful testimony to humanity’s urge to intoxication.