I’ve never really been “into” Scotch.

Scotch tends to make people make snooty noises, makes them swirl their drink and discuss the “bouquet of flavors,” whereas I tend to guzzle. When it comes to whiskey, my drink is high-proof bourbon. Don’t get me wrong—I like Scotch; it’s just that I prefer it in a squirt bottle full of ice so I can pretend I’m drinking tea on camping trips.

The story he told me, and I cannot stress how much I don’t believe it, goes like this: in the 1970s an avid Scotch collector died. His house was, for one reason or another, left alone for over 30 years, until about six months ago, when my friend—we’ll call him Steve—was hired as a contractor to fix it up. While working on the basement, Steve discovered a cold, dark room chock full of dusty, beautiful bottles of Scotch, and he decided that rather than let them suffer an unknown, potentially terrible fate, he would do the right thing: take them home and protect them. At least until he was given the chance to trade them away for porn. 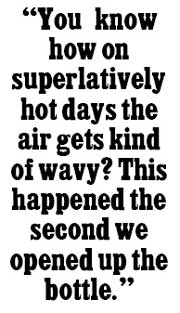 As far as I can tell, there isn’t much of a market for vintage Scotch. After extensively researching on Google for 15 minutes or so, it turns out that Scotch doesn’t age in the bottle, and that there are far more sellers of antiquated liquor than there are buyers. It is completely possible that I am the one getting the shaft in this deal, and these bottles are still worth the $2 paid for them in the ‘40s. Maybe. But looking at them—their beautiful, dusty packaging, with tax stamps still intact over the cork, the fact that some of them were bottled the year my father was born—I seriously doubt it.
I considered trying to sell them but after some serious thought, I decided it would be a much more fine and noble thing to drink them and announce my opinions to the drinking world.

Keep in mind that I am not a connoisseur—my favorite drink is Maker’s Mark in a warm flask, so if you’re looking for nonsense about “notes” and “nose” and “flavors of oak,” you’ll probably just end up wanting to strangle me.
Ballantine’s Scotch Whisky (1938)
I ran the bottle under water to remove the thick accumulation of dust. God only knows what the walls were made of in that (possibly fictitious) basement. Asbestos? Guano? No thanks. Tearing the tax label was kind of a kick for me, like ripping into history.
I screwed off the archaic cap and stepped back. The whiskey’s odor had an assault radius of about eight feet.

“What the hell is that?” my girlfriend, Monica, asked from across the room. “It smells like doom!”

“No, it smells like history,” I said, pouring two fingers of the stuff into a glass.
History smells like it’ll get you drunk pretty fast,” she said.

It was a clear golden color and tasted like very, very strong Scotch. Let the Internet say what it will about whiskey not aging in the bottle — 81-year-old Ballantine’s is much stronger than the stated 86-proof. The overall bouquet is one of fire, with a lingering gasoline aftertaste. I decided to call over my landlord, Adam. He’s a big Scotch fan, and I poured him a glass to make sure I wasn’t just being a pussy.

“Holy shit!” he said, then regrouped. “That’s good Scotch.” Despite that review, I noticed that he had to fight to not wince as he swallowed.

James E. Pepper Kentucky Straight Bourbon Whiskey (1958)
We needed something to clear our palates before the next Scotch assault, so next up was the bourbon. I’d only squeezed one lonely bottle of bourbon from Steve, but this one is heartbreakingly gorgeous. James E. Pepper Kentucky Straight Bourbon Whiskey—distilled in the fall of 1946 and bottled in the fall of 1959. What’s more, the original cardboard box it came in claims that this is the “Deluxe Decanter.” The Peppers were a highly esteemed family of distillers, early Kentucky settlers, and the people who had the forethought to hire Dr. James C. Crow as their master distiller. Dr. Crow was the man who brought us Old Crow (my spirit animal), and many of the Pepper brands. The distillery shut down in 1960, although I’ve read that United Distillers still produces a version of the brand for sale outside of the U.S.

James E. Pepper weighs in at 100 proof, and I was actually nervous when I broke the seal. The cork was bone dry and I had to carefully remove it with a knife.

It smelled like bourbon heaven. It smelled smooth, masking the high proof. Everyone that smelled it wanted some. I, Monica, Adam, and Damien (my longtime drinking buddy) all had a glass of the dark amber liquor.

I was choking back tears. Honestly. Tasting something that good—with the knowledge that you’re not likely to ever come across it again—it’s an automatic nostalgia moment. You know that in 50 years you’ll be looking back and boring someone about it while waiting for a bus.

Chivas Regal Scotch Whisky (Date Unknown)
Since we knew what contemporary Chivas tastes like, we figured we would definitely be able to say whether or not a half-century old bottle was better than one we just picked up from the liquor store.

The first and most obvious difference was the bottle itself. My bottle is black and opaque, and the label is greenish, suggesting a pre-WWII vintage.

This cork was also dry, but after the Ballantine’s and the Pepper, our skills at coping with stressful situations had taken a turn for the complicated.

After going to work with a knife, Damien concluded: “Shit, I’ve got cork in the Scotch.” We were petrified. The bottle had survived a World War and at least six decades of exile from Bonny Scotland, and surely shouldn’t end its life as a cork-filled abomination. We immediately set to work.

“Here,” I said, thinking that I was making sense. “Pour it in this Ziploc bag.”

Damien did, and we soon found ourselves in possession of a bag of ancient Scotch with cork floaters (FYI: 4/5ths of a quart of Scotch doesn’t quite fill up a normal-sized Ziploc bag). This was obviously unacceptable, so we set about hatching a recovery plan. We rinsed out the bottle and hung it upside-down on the dish rack for about ten minutes to let it dry. While we waited, we marveled at our bag of Scotch and helped ourselves to another serving of the Pepper. Once dry, we cut a hole in the corner of the bag and poured it through a tea strainer and into a funnel balanced precariously in the now-dry bottle.

Our drunken ingenuity paid off, and we soon found ourselves sitting around glasses of 100% cork-free Scotch.

The Chivas tasted remarkably like Chivas. Possibly it was our growing inebriety blurring our taste buds, but we  concluded that Chivas hadn’t changed their recipe in quite a while, a noble thing as times are (see Jack Daniels). It also proved that Scotch can hold up well in a bottle stored in a cool, dark basement.

Old Rarity Scotch Whisky (1940s)
I had never heard of Old Rarity, and Google wasn’t terribly illuminating. A search dredged up lists that included Old Rarity, but provided no real information about the quality or history of the brand. It was up to us to bring the booze back into the light.

My first impression was that we were dealing with cheap hooch. Calling your whiskey “Old Rarity” is like naming yourself “Honest Ed” — it comes off as presumptuous. The bottle itself resembles the sort you might imagine Tom Waits chugging before writing “The Piano Has Been Drinking.” It had all the hallmarks of rotgut and you could picture someone buying it in the 1940s with two dimes and a nickel.

To its credit, the Old Rarity had a metal screw-off cap, sparing us the possibility of another cork catastrophe. After the Chivas situation and considering our blood-alcohol levels, the odds of our having been able to cope with any kind of difficulty with anything approaching grace were staggering. We’d probably have simply smashed off the neck and drunk it down, shards and all.

You know how on superlatively hot days the air gets kind of wavy? This happened the second we opened up the bottle. It was as if the bottle had developed Spidey-sense, and knew it was in danger of being drunk. The only other booze I’d seen behave in such a manner was raw moonshine, which, by the way, gives off greenish-blue vapors.  We soldiered on, willing to risk instant cirrhosis of the liver for science, or possibly art.

We decided to take it straight, like men (and a woman).The initial tasting comments were unintelligible, consisting mainly of coughing and slapping the table. It burned like battery acid and brought tears to my eyes, and believe me, they were not tears of joy.

Our assumptions were correct: this was emphatically not a sippin’ whiskey. This was whiskey to help you forget that the ground is cold as you lay down for a nap under a railroad bridge. Saying that this was a step down from the James E. Pepper would be akin to saying that Jesus is “kinda popular.” It’s the manner of hooch you dream about serving those friends who feel the need to rouse you out of bed in the middle of the night to check on your liquor stocks.

“I like it,” Damien said in a hoarse voice. Monica, on the other hand, looked fit to dump me. Adam looked like he wanted to raise my rent. Somewhat demoralized, we moved on to our last tasting of the evening.

Ambassador Deluxe  Scotch Whisky (1940s)
The 12-year-old bottle of Ambassador was already somewhat daunting to me. I work in the advertising industry, and Ambassador recently made something of a splash with their newest campaign—geriatric men and women looking serious next to copy that said things like, “How do I know it’s true? I saw it on the television, that’s how.” The idea being that Ambassador has been around forever, isn’t sexy or cool, and could only make a non-hobo impression if they made a big joke about it. To me, this says that the experience of drinking it will be the equivalent of crawling into my grandmother’s attic and taking deep, open-mouth breaths. Even the emboldening effect of my drunken haze couldn’t stop me from dreading it. Or, as Monica said, “Can we be done? I’m drunk and I wanna go do stuff!”

I made short work of the tax seal — we were well beyond removing it with anything resembling ceremony at this point. It smelled … all right. Not horrible. Not the best, but not horrible. We had a taste and the comments leaned toward the “Hmph, whatever,” part of the spectrum. It was probably so-so when it was bottled, and the years definitely didn’t add any distinction.

We didn’t want to end our night on such a humdrum note, so we decided to re-taste our favorites—Monica, Damien, and I all had another glass of the Pepper, and Adam went back to the Ballantine’s. We declared the tasting successful, and were all very proud of ourselves as only very drunk people who feel as though they’ve accomplished something can (even when what they’ve accomplished boils down to drinking booze and getting drunk).

I’ve decided to jealously hoard the James E. Pepper for extremely special occasions. I’m keeping the Ballantine’s and Chivas around to impress Scotch drinkers. The Ambassador is for casual guests, and the Old Rarity . . . let’s just say I’m saving that for my special guests.

The People’s Republic of Baiju