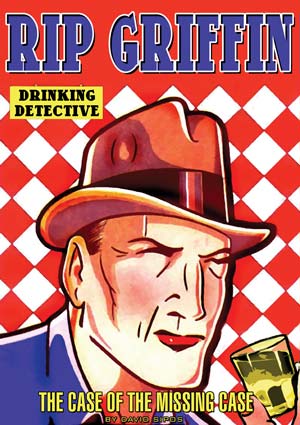 My pal Jimmy sat on his back stoop gently massaging the purple egg growing on the left side of his forehead.

“The Easter Bunny leave that?” I asked as I handed him my pint bottle of Dewar’s.

Jimmy laughed, then winced and took a pull of the whiskey. “Yeah, sure, if the Easter Bunny spent the precedin’ ten years pumpin’ iron in a state correctional facility.”

Jimmy had a semi-formal way of speaking, like a shit-faced cop trying to sound sober while rousting a drunk. He handed the bottle back and I took a drink and looked the place over. Both the screen door and the heavy oak front door of his bungalow were torn off their hinges.

“So tell me again what happened.”

“As I related to ya before, I arrived home from my place of employment after dark, so there wasn’t no light to speak of. When I stepped up on the veranda, somebody smacks the fuck out of me, I think with some kind of truncheon. I blacked out and when I come to my senses, the front doors were dismembered and a whole case of Sam Adams Utopias was gone.”

“Sam Adams Utopias? What the hell are you doing with that stuff?”

Sam Adams Utopias is a beer from the Boston brewer that you drink like cognac. It costs 90 bucks a fifth. That would put the case price at $540. For beer.

“Who knew you had this stuff?”

“The clerk at Argonaut Liquors is the only one what I can think of.”

“Her. Heidi. She might have been here once or twice.”

“I held a wine tastin’. She helped me out with the selection.”

“You owe me twenty-percent of the case price for the Sam Adams. And from now on stick to Miller High Life, it’s sophisticated enough for your palate. For Christ’s sake, you smoke Swisher Sweets. How can you taste anything anyway?”

I stood half-hidden behind a pirate cutout advertising Captain Morgan’s Spiced Rum and watched Jimmy’s “friend” Heidi stack boxes of wine onto a shelf. Heidi was about four foot six and weighed in at 220, ten pounds of which could have been the piercings in her face. I could imagine how Jimmy’s door had gotten torn apart; all Heidi would need to rule the streets of Pamplona was a set of horns.

But she didn’t look like the type to covet a case of Utopias. I started thinking I was barking up the wrong tree when I spied a tell-tale tattoo on her right bicep: A BMW motorcycle logo encircled by the words DADDY’S GIRL.

I moved my cardboard pirate down two aisles to where she was working, keeping the flamboyant sailor between me and Heidi.

She turned to face me and Captain Morgan, a box of white zin in her big paws.

“Jimmy Lute was wondering how that Sam Adam’s Utopias is.”

She narrowed her eyes. “Who are you?”

“Ask me another question and you won’t have a dick.”

I rolled my eyes. “How original. I need that case back, Heidi.”

“I’d need about eight friends to kick yours.”

“You don’t have eight friends.”

Heidi threw the box of wine at me like she was tossing a softball. I ducked as it took off Captain Morgan’s head. Heidi charged me. Stepping aside as she barreled past, I stuck out one of my thrift store loafers and tripped her, sending her headlong into a five-foot stack of Coors 18-packs. She plowed through the barricade and fell to the floor, stunned for the moment. A store security guard came bounding over, followed by a pair of Heidi’s fellow clerks. The guard squatted down next to Heidi and checked her over for any obvious injuries.

“What the hell happened?” he asked.

“Heidi and I were doing the tango and she slipped.”

“I think I saw him trip her,” squawked one of the tattooed clerks.

“Maybe I should call the cops,” the guard said staring me down.

“That’s not necessary. Heidi doesn’t want any cops, do you Heidi?”

“I don’t need a cop,” answered Heidi as the guard helped her to her feet, “I need dance lessons.”

Jimmy poured us each a snifter of Utopias as I lit a Camel. It was a hot night and there was no breeze to cool us off as we lounged on Jimmy’s porch. Jimmy swirled the amber liquid in his snifter and deeply inhaled its sweet aroma. I tossed mine back like a shot of cheap whiskey and screwed the cap off a cold bottle of High Life.

“So why’d Heidi try to abscond with my hooch?” wondered Jimmy.

“It was her Dad’s birthday and she wanted to impress him. He’s some yuppie with a BMW motorcycle and a house in the Highlands. She made a stupid mistake but nobody got hurt so I kept the cops out of it.”

Jimmy gingerly touched the purple knot on his forehead. “And she’s agreed to repair the damage to my foyer?”

“She has some friends at Home Depot. Give me another shot of that crap.”

“You’re not supposed to drink it that way.”

“And you’re not supposed to act like a yuppie with a BMW and a house in the Highlands. Now shut up and pour.”