Are there four words in the drunkard’s vocabulary more heartening than those? Four simple words, yet so packed with drama and purpose. It can be an invitation to bond with friends and strangers alike. An instant shared experience. A way of marking an occasion, of saying hello, good luck, congratulations, better luck next time, and so long.   An opportunity to become blood brothers, if only as long as the same booze courses through your veins. If sharing a beer with a friend can be called the equivalent of a friendly walk in the park, then doing a shot is akin to storming a fortified bunker together-—it’s more dangerous, yes, but also more exciting.

Too often, however, this venerable ritual is executed as a mechanical event, like the lighting of a cigarette, or worse, as a bit of unpleasantness one must occasionally suffer when amongst friends. Others think it requires a special occasion, and those are the same people who only call their mothers on Mother’s Day.

The fact of the matter is, doing a shot requires no occasion at all, because, properly executed, it is an occasion.

The Five Steps of Doing a Shot

Before you hoist the flag, you have to determine who shall march under it. You have three options.

The One on One: The most intimate of shots, it is an opportunity for two friends to make a personal connection, and to insulate themselves from the rest of the crowd.

The Gang’s All Here: A group shot with the inner core of your social circle, serving to bond the gang together.

The Free For All: This two-tray extravaganza includes friends and acquaintances alike, and perhaps some strangers. Usually reserved for special occasions, such as birthdays and holidays. 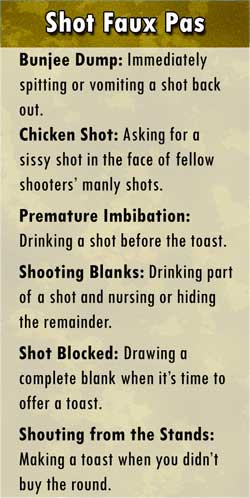 Before you make your decision, know this: an invitation to a shot is a form of compliment; forgetting to invite someone can be a grave insult. If you find yourself surrounded by many shades of friends and acquaintances, it can be a little tricky. If you’re unsure whether to by a peripheral pal a shot, ask yourself this question: Is he likely to buy you one back?

You’ve made your count and it’s time to hoist the flag. But how high? If you shout it out and raise it high, you may draw unwanted volunteers. Choose your volume and language carefully. You can be as selective as, “Let’s you and me do a shot,” or “We four are doing a shot,” or as democratic as, “Who wants to do a shot?”

By hoisting the flag, you’ve volunteered yourself as shot master—it is now your responsibility to guide the ritual to its finish.

You’ve mustered your troops, now its time to outfit them. You’ll want to make them drink the same thing. A common drink reinforces the shared experience and strengthens the ritual. You don’t want to charge into the teeth of the enemy with one guy wearing a kilt, another a sombrero, and the guy with the Purple Hooter? He’s wearing pajamas, for crissakes. Wave aside their cries for different uniforms, impose your will as shot master, and spare the bartender the hassle of preparing a mishmash of drinks. The fact of the matter is, the shot caller can order whatever the hell he wants, so long as he’s paying for the round. They don’t have to like it, they just have to drink it.

So, shot master, what sort of uniform shall your soldiers wear into battle? Think carefully, your reputation is on the line. Better to have them whine under the weight of bourbon armor than laugh at your choice of a Banana Cow blouse. You can’t lose with bourbon, scotch, whiskey or tequila. Rum is exotic but respectable. Vodka is for fancy boys and Russians. If there’s steel to be tested, order Wild Turkey 101. Schnapps is refreshing, but slightly suspect. Jager and Tuaca are safe, but won’t earn you any macho points. Flaming drinks and depth charges are showy but fun. Single malts are not made to be shot. Mixed shots consisting entirely of hard liquors can add variety and adventure. What’s commonly know as “girlie shots” are like berets. Wearing one every now and then is fine, but wear one all the time and you start getting a reputation.

A good rule of thumb is, the smaller the group, the tougher the shot. As the count gets larger, you’ll start running into resistance to hard liquor, which is why most Free For All shots tend to be Kamikazes and the like.

You’ve parlayed with the bartender, the troops are outfitted, and you’re ready to leap into the breach, right? Not so fast. As shot master, you must rouse the troops with a little speech, in the form of a toast. Do not let yourself be usurped. Whoever pays for the shot makes the toast. This is a rock-solid rule, there can be no debate.

The toast gives meaning to the act. It can be used to put a red circle around a particular moment, or set the mood for the rest of the evening.

Hopefully you didn’t wait until now to think one up. There’s nothing like a gang of thirsty drunks staring at you to cloud your memory. If you can’t think of anything more clever than “Cheers!” fall back on the tried in true, “Here’s to the next one.” This also serves to remind the troops that there should be a next one, at their expense this time.

The Clink: Always touch glasses. It makes a nice sound and serves as an exclamation point for the toast. In the old days the clink was used to trade a slosh of each other’s drinks, so as to discourage poisoning. If you’re doing a One on One, be sure to make eye contact when you knock them together.

The Hoist: After clinking, the shooters raise their glasses high and give a whoop.

The Knock: Some drinkers employ a post-clink, pre-drink “knock wood” maneuver. This consists of rapping the bottom of their glass on a bar top or table. Some do it for good luck, some do it to salute their dead homies, some don’t know why the hell they do it.

Take a half breath and knock it back in a single go. Don’t stop to taste it, just let it slide down your throat and go about its business. Invigorating, no?

Seal the ritual by slapping the empty glass on the bar or table with a loud bang. Post-shot exclamations of bravado such as, “That’s the stuff!” or “That’ll kill those worms!” are encouraged, as is back slapping. If the shot was not to your particular tastes, feel free to make a face and slap the bar or table repeatedly with your hand.

If you happen to notice someone didn’t finish their shot, it is your duty as shot master to call him out and roundly shame him. Also make a mental note to remove him from the roster of future campaigns.

You may now bask in the residual warmth of having walked through the fire together (unless you did a weak shot, in which case you merely ran through a sprinkler). You led the troops up the hill and planted the flag.

Gaze around from that great height, flushed with victory, and note the many other hills on the horizon. Time to retire your commission, promote one of the troops, and get back on the attack.