Pass through the gates of the border crossing at Tijuana and walk 100 ft. and you will be confronted by a hundred cabs and their drivers.

As they are in any impoverished country that preys on the tourist dollar, the typical Tijuana cabby is a multifaceted beast—he’s guide, pusher, long-lost brother, pimp, fortune teller and agent of evil all rolled up into one grinning package. He’ll pander to your worst and bring out your best, and on an unusually hot day he was exactly what I needed.

“Señor!” a fat man said, seizing my arm and dragging me away from the howling pack, “Come with Chuey, I take you someplace special.” He screamed obscenely at his comrades as we sped out of the lot, then turned his sparkling eyes to me in the rearview mirror. “I take you to La Revolución!”

“Good, good,” I said. It could be a long ride to the Revolution so I asked him if he had anything to drink. His smile flashed big under his mustache as he passed back a flask. The flask was engraved with a skeleton wearing what appeared to be an admiral’s uniform and I closed my eyes and took a long drink. It was different than anything I had ever tasted, bringing to mind swarthy Indians chewing up cactus and spitting it into a giant cauldron while tribal elders nodded their approval.

I passed back the flask and began noticing 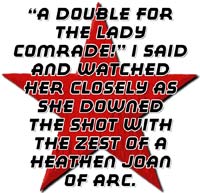 everything around me in perfect detail. A girl at the stop sign strummed a toy guitar singing “La Bamba” for change while her mother hawked giant plaster piggy banks shaped as hamburgers. Wild-eyed boys with boxes of cheap sunglasses jumped in and out of the shadows to scream strange English at passing gringos, and I felt the tight harness I’d carried from San Diego begin to loosen. The daily routine back home had smothered me into a soul crushing sleep and this sweet mystery booze had jolted me awake like a kick to the head.

La Revolución, huh? It was about fucking time.

The cab came to an abrupt stop and my driver leaned back to say, “Talk to bartender. Tell him Chuey sent you.”

I nodded, paid up and got out. I stood in quiet awe, to either side of me stood fifty bars lined up like drunken soldiers: if ever there was a place to start a revolution it was right here. The moment was stolen as Chuey pulled away.
“What’s that shit called?” I cried out. He just laughed and waved goodbye.

Over the door of the nearest bar was a giant neon sign reading, “BAMBI!”

I walked into the dark and quiet room to find it deserted except for two tired whores and a thin young man behind the bar.

“Corona and a Cuervo,” I said as I sat down at the bar.

“What brings you to Tijuana?” the earnest bartender asked as he poured the tequila. His eyes flashed to the whores and he smiled a little.

“The Revolution,” I said.

“You came for La Revolución, señor?

“Ah, so you know about it. Chuey said you would. See I came down here for no reason at all except for the fact I had no reason at all to stay where I was. I’m from San Diego, you see, a jaded gringo with no purpose in the world. That was, of course, before I heard about the Revolution. Then all that 9-to-5 bullshit went right out the fucking window.”

I shot the shot, chased it with cerveza, then doubled up on the tequila, then doubled up again and the tremendous weight of a life misspent as a passive observer of things revolutionary lifted from my shoulders. What a fool I’d been! All my life I’d craved rebellion and all the time they’d been selling it at the corner liquor store.

“REVOLUTION!” I screamed at the top of my lungs, then ordered another double. A nervous silence fell over Bambi’s, but no one yelled for a cop. I immediately realized they were down for the cause.

“What are we revolting against, Señor?” one of the girls asked after taking the seat next to me.
“The smug sureness of sobriety and its failure to provide mankind with any sort of lasting comfort in the face of life’s obvious absurdity,” I explained, then eyed her suspiciously. “You’re not a counter-revolutionary, are you? An agent for the Women’s Temperance Christian Union, perhaps? Did O’Doul’s send you?”

“I am just lonely,” she said. She stared at me and the mascara ringing her eyes made them seem all the more empty. “I grew up on La Revolución.”

“A double for the lady comrade!” I said and watched her closely as she let slide the shot with the zest of a heathen Joan of Arc. No agent of sobriety was she. “You have zest,” I informed her. “Are you prepared to lead a wino battalion across the Whiskey River? Will you allow your troops to stop and drink?”

She paused to think, then came back with a resounding, “Sí!”

“You pass,” I said, then began confiding in her my splendid plan as we lined up glasses of tequila like traitors against a bullet-pocked wall. I explained to her how we would conduct the beer hall putsch, told her how tequila would flow through the streets by dawn, and insisted that we honor Chuey as the father of La Revolución! and erect a monstrous statue in his honor.

The bartender ducked his head into my tunnel vision and smiled at the mention of Chuey’s name. “Would you and the lady like to some privacy?” he asked.

“A fine idea!” I responded. “You never can tell who’s listening or what side they’re on.” I said. “The great minds of the revolution must be kept together, lest they form splinter factions.”

Groping each other for support, we followed the bartender through a door and down a filthy hallway. He opened one of the many doors and stepped aside. The room smelled of stale beer and sex. Every revolution has humble beginnings, I reminded myself as I sat on the bed. Cheap tequila and filthy rooms would make us stronger while the bourgeois pigs got weak sipping mineral water in their clean and comfortable mansions.

“Would you like anything to drink before I leave, Señor?” the bartender asked.

“A bottle of champagne, comrade,” I said, “but do not think me bourgeois.”

“Of course not,” he assured, returning almost immediately with a bottle and two glasses. He faded out the door and I raised a toast to Joan.

“Until there are no dry counties we will not sleep!”

She smiled and started fumbling with my zipper. “Not now, madam,” I said with the firm resolve of a young Che Guevara, “not while there are still hobos with empty cups. We must take our message to the street!” I leapt up and charged down the hall into the bar.

“Twenty for the room, twenty for the girl, pendejo!” and other obviously counter-revolutionary slogans were shouted from my right. I’d been lured into a den of reactionaries! I pointed my tunnel vision toward the door and charged, just slipping past the long arm of capitalism reaching over the bar. I felt the dull thud of a beer mug in the middle of my back as I hit the street.

“You got Trotsky but you won’t get me!” I shouted as I scuttled laughing down the street. Four blocks later I had to stop for breath. I grabbed hold of a corner street sign for support and was immediately swarmed by a proto-capitalist youth league heaving boxes of merchandise at me.

“Never mind the sunglasses,” I squeezed out. “Where is the Revolution?”

The Bible-thumpers have gotten to them, I thought, then realized they were pointing not to the heavens, but to the sign above my head.
La Revolución Boulevard, the street sign read. I thought for a moment, vomited on my boots, flagged down a cab, and ordered him to take me back to the border, all the while thinking, Adios, Revolución! I arrived too late to help, but not too late to celebrate your grand victory.

Seven years later, I still can’t bring myself to drink tequila and have confined my revolutionary activities to my local bar.

Remember, comrades, the revolution is only the next shot of whiskey away!