Home Bar Culture The Faded Glory of the Martini Lunch

James Bond typically enjoyed a martini while on the clock, right before pummeling an extra into submission. In Alfred Hitchcock’s brilliant “North By Northwest,” Cary Grant engaged in complicated business deals over a few martinis.

Those days are over. Now we have a WGN radio program called “No Martini Lunch,” self-righteous troglodyte George Will claiming that martini lunches erode our “morality,” and people actually asserting that working out at lunch reduces more stress than a couple stiff drinks. Commentators from Susie Bright to Village Voice food critics refer to the martini lunch as ancient history. As Dorothy Parker said in her famous answering machine message, “What fresh hell is this?”

The phrase “martini lunch” originates with Jack Kennedy, who disparaged long business lunches. Years later, teetotalers George McGovern and Jimmy Carter criticized “two-martini” and “three-martini” lunches respectively in clumsy attempts to sway working class voters. Four would have been a more correct number. Regardless, the quantity of martinis isn’t the point, nor is the martini itself. Any drink will do. The point is we should treat ourselves better at lunchtime. Why? Because we goddamn deserve it.

For lunch, Robert, an accountant, and Sheila, his boss, walk into the deli a few blocks from their office.

“Mick, I’d like an avocado salad, no dressing,” Sheila says to her server and bartender.

“Hey, Mick,” Robert says. “I’ll have the split pea soup, some bread, and a bag of those potato chips, the ones with the hot chili flavor.”
“What’ll you have to drink, my friend?” Mick says.
“Vodka martini straight up with a twist.” 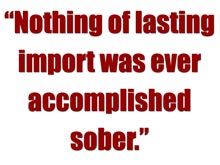 A year earlier, Sheila remembered the times she sat at her desk looking at the clock for the ninth time in twenty-five minutes, thinking that all those years she waited tables to pay for her master’s degree had been completely wasted. All the disposable income she had went to pay rent, buy overpriced clothes, and then have those clothes dry-cleaned. She’d love a drink, but the brass wanted their executives clean and sober.

Sheila forced those thoughts out of her mind. She picked up the phone and dialed Robert, her laziest and most slovenly underling. As much as she hated to it, it was time to bust some ass. “Robert,” she said. “Get in here.”

Institutionalization of the martini lunch would bring vast changes. Disgruntled, shotgun-wielding lunatics in dress-shirts mowing down their supervisors and co-workers would fade into history. Bickering, shouting, and disasters like disciplinary probation would all but disappear. Non-liquor-related resolution of intra-office conflict is a joke. One company, Buckley Industries, located in Kansas, actually hired an outside consulting firm to solve their problem with employees going at each other’s throats. Their answer? The consultants issued a company-wide memorandum requesting that employees refrain from using abusive language. They suggested that when an employee wanted to say, “Eat shit and die,” he should instead kindly use the phrase, “Excuse me.” When an employee wanted to say, “When the fuck to you expect me to do this?” they suggested, “Perhaps I can work late.” Or, “He’s not familiar with the problem,” instead of “He’s got his head up his ass.” All Buckley Industries eventually got out of this so-called solution was federal court litigation.

Six months earlier, Robert buried his head in his hands. The tax reports were due in four hours and he still hadn’t received the latest tables from the revenue department. He desperately needed a drink to calm down, but the company had a zero tolerance policy when it came to drinking on the job. He felt like he had been ridden hard and put away wet.

Robert’s boss Sheila popped into his cubicle for a moment. She was having a bad hair day and the bags under her eyes were big enough to qualify for steamer trunks. “Robert, see me in my office in ten minutes.

“We have to talk about your progress notes.” She sighed involuntarily, slumped her shoulders, and dragged herself away.

Robert kept thinking about the pump-action shotgun his brother bought him for his birthday. “This job sucks,” he said under his breath.

Life is much more than work. Yet it can very easily dominate our lives. A pair of double vodka martinis straight up with a twist over lunch brings life to the workplace. Workers with a little juice running through their veins are simply more productive. Rattled nerves smooth out. Jokes and laughter seep in. Creative solutions to problems appear. Outlooks brighten. The exaggerated importance of pointless paperwork recedes. The stress of work becomes manageable.

Drinking at lunch should be brought into the open and legitimized. Workers getting a little soused with their split pea and bread come back to work ready to hunker down and meet that silly deadline or rip through that concrete slab in the way of the foundation’s south wall. Three o’clock should be a time for a relaxing and refreshing nap underneath your desk at your office or behind the salad bar at your restaurant, not for conspiring an early getaway from work.

In the boardroom, Robert stifles a small burp. Sheila looks at him and giggles. The bankers on the other side of the table, Eliza and Franklin, chuckle good-naturedly.

“I think our dispute over the amount of the purchase money security interest is a trifle,” Sheila says. She reaches for a bottle of vintage brandy on the back shelf.

Eliza says, “I don’t know what we were thinking. It really isn’t a big deal, just a little money. Hell, money isn’t all that matters. Money doesn’t give you a good buzz.”

Robert says, “It’s certainly not as intoxicating as a stiff drink.” He offers his glass as Sheila pours the room another round.

“We have a deal, then?” Sheila asks the brandy-mellowed bankers.
Eliza and Franklin nod emphatically.

I foresee a future where there’s no difference between the bar and the workplace. Why should we succumb to the notion that Happy Hour is our only salvation from the rigors—nay, the horrors—of work? Why the hell can’t we drink at work, in the open, like human beings?

“Have another drink, Robert,” Sheila says. She pours him another glass of brandy to celebrate the conclusion of the banking deal.

“Thanks, Sheila. You know, you used to be a real hard-ass, but since the company started letting us have a few at lunch, you’ve calmed down.” Robert downs his brandy quickly and indicates he’d like another.

“Yeah, Bob, I know. It was tough back then. The brass was breathing down my neck, writing me up left and right because my accountants were making so many damn mistakes and losing the company a boatload of money.” Sheila fills his glass again.

Robert finishes another drink and feels like sitting down on the floor against the window. So he does. He laughs.

Sheila staggers over to where he sits and pours him another. “And your accuracy with the interest rate calculations has improved dramatically,” she says, sliding down to the floor next to Robert.

Radica and Toledo from down the hall in the typing pool walk in, smiling wide. “We heard you two cut a deal that will keep the company in business another ten years,” Radica says. She and Toledo sip beer out of a plastic cup they took from the dispenser near the kegs in the hallway by the copier room.

In this era of economic stagnation, retreating consumer optimism, fear of terrorism, and uncertainty regarding possible armed conflict in every corner of the globe, martini lunches offer a broad range of advantages. Even in the Oval Office.

“Dick,” the President says. “I wonder if you could hook me up with a bottle of that Napa Valley . . . what do you call it?”

“Actually, it’s Bordeaux,” the Vice President replies. “Château Petit Village 1997. I can hook you up, no problem.”

“Man, I haven’t had a drink since I found God.”

“I like you, W., I really do. But I have to tell you, I’ve never really trusted teetotalers. Neither do the French or the Germans.”

“I really haven’t been able to relax since I quit drinking. Sometimes I think this whole Iraq thing is a product of my inability to just get pooched, really fucking shined up, you know?”

My friend the lawyer keeps a bottle of JD hidden behind his copy of the Federal Rules of Civil Procedure, but he does so out of fear. Too many of us fear the supervisor’s wrath if she smells bourbon on the breath or hears an out-of-place hiccup. Our personnel guides treat us as criminals if we are caught with a bottle.

Work should not be a prison. All it takes is an innocent drink to effect great change. H.L. Mencken wrote that cocktail is “the greatest of all contributions of the American way of life to the salvation of humanity.” We spend over forty — sometimes fifty or sixty — hours every week at work. Haven’t we earned a drink?