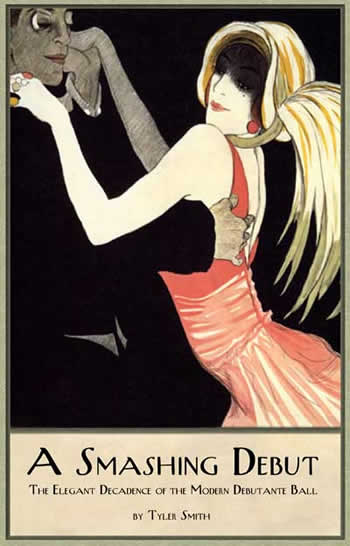 The debutante ball is an anachronistic and potentially beautiful occasion.

Taking its roots from aristocratic England, the debutante ball was originally devised as a way for nubile young women to be presented (the word debutante comes from the French “debuter,” meaning “to lead out”) to potential husbands of similar social status. Usually confined to the landed aristocracy, these ceremonies were often accompanied by a large dowry and limited to a small circle of potential takers. This may have led to occasional inbreeding, which explains why many of the English look like boll weevils.

As time went on and the middle class began to make money following the Industrial Revolution, the wealthy landowners decided that perhaps alliances with these noveau-riche fleebs was indeed in order. Thusly, middle-class girls could be “presented” to the aristocracy if they could procure an aristocrat sponsor. And hopefully for the girl, if their family had enough ducats, by the end of the season (lasting from April until July) they would have found a husband, assuming they didn’t have a face like a train wreck.

Today, the debutante ball is a mish-mash of the old puritanical English ritual and a means for uppity white people to make use of their country club memberships. However, The San Marino Woman’s Club Debutante Guild insists that, “In our guild, the Debutante Year is the finale of four to six years of philanthropic, cultural and social training, welcoming the debutante into a world of civic responsibility and social awareness.” This philanthropy and social cultivation flapdoodle must help dilute the fact that these presentations today are usually a last ditch effort on the part of wealthy Southerners to delineate class, gender and color lines. While ostensibly thrown for charity, one debutante notes, “the events themselves are usually reserved for elite families and friends…excluding other community members.” Here is the rub: finding a rich southern girl and befriending her—a daunting task, for rich southern girls are notorious for having tree-trunks up their asses. However, if you can manage this, it is quite easy to enjoy yourself at these little soirees. 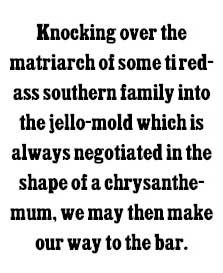 First, one must get an invitation. Assuming you have tricked a southern belle or two (and their families) into thinking you’re civilized, the invites begin rolling in around December or January. This is crucial because it is much more fun to be drunk in cold weather. Usually, one is set up with a hideous looking ogre of a damsel who has either already debuted or has high hopes of someday executing the “St. James Bow,” a ridiculous maneuver symbolizing a bow to the old court of kings and queens in England, known conveniently as the St. James Court. Once you have convinced your date that your Porsche (Hyundai) is broken and that she must drive, it’s time to hit the bottle. Remember, though, drink ripple wine before the event; an open bar with high-brow scotch awaits at the party.

If you are lucky enough to avoid the presentation ceremony and are only required to go to the after-party, cheers to you; this makes life much easier. Also, do not eat anything for at least six hours before the ball; enormous plates of chicken fingers, honey mustard sauce and bacony hors de’oevers await you.

Once your date has negotiated you and usually one other couple to the country club, it’s time to give your coat to your date and tell her that, lamentably, you’ve got to go to the restroom and could you please hang this up for me? Hopefully you have arrived early enough to persuade the bartenders to give you five drinks for you and your “friends.”

“Yes, please. Five Cutty Sark on the rocks and pour them like you don’t own them—my friends are all major alcoholics.”

Then, inside the bathroom stall where you are rolling joints and pounding your alcoholic “friends’” five scotches, you can call 900 numbers on your date’s cell phone which you have agreed to hold onto because “It won’t fit in my purse.” Around 9:45 you should probably emerge to mingle with pseudo oil barons (it’s okay, the 70s were hard on all of us) and drool on the dolled-up dates who look infinitely better than your assigned sea-donkey. Once it has been made clear to the swarms of important daddies that you will never be a potential groom to their daughters, we can now find our date and ask “Where have you been? I’ve been looking all over for you?” She will invariably say the same thing, but rather than pounding drinks, she’s been cultivating the local Yale boy who builds houses in Nicaragua for the Mexicans or whoever. Conversation with the date will then always come back to one thing, like one of those cheap weighted dolls that fall over and somehow manage to right themselves: Dancing.

One is obligated to dance at least one dance with one’s date and inevitably a power struggle ensues; the drunken boy wants to get the damn thing over with while the hopelessly sober girl wants to wait for the 10,000 Maniacs tune which always comes at the end of the night when the drunken boy is passed out on the golf course with his pants down and the ice sculpture melting in his arms. They never learn. Usually, the drunken boy will (occasionally one will be paired with an equally dipsomaniacal girl, and this is wonderful) convince the girl to go out on the floor and dance perfunctory to the song playing at the time, which is usually something by an old dead person and unfortunately not Devo. But this is over quickly when the girl (your date) spies you playing ocular grab-ass with the drunk middle-class girls who like pot and oral sex on the golf course.

Once your date has ditched you, find a waiter who looks miserable (this is not hard) and invite he/she to a vacant room in the country club for some pot. Usually, if one is so inclined, it is easy to wrangle up a few debutantes for this as well, because “My dad is such an asshole. I, like, totally don’t care about this anymore.” And they are drunk but someday they all marry the Yale Third World house-builder. When you are sufficiently stoned, thank your waiter for putting up with all these bilious, cretinoid people and proceed to the food bins. Here is where you can really make a rumpus.

Knocking over the matriarch of some tired-ass southern family into the jello-mold which is always negotiated in the shape of a chrysanthemum, we may then make our way to the bar. Again. Two more Cutty Sark on the rocks and a stealthy pull off the champagne bottle should carry you until after dinner. Dinner is quick and if you do not watch carefully you can miss it. One must not spend too much time in the dinner room because there are entirely too many lights and old people who want to talk with you. So, to facilitate things, grab a plate and fill it full of pasta, usually rigatoni. Then, pour ranch dressing all over it because you are drunk out of your idiom. Beware of depositing chicken fingers on top of the pasta, for these are unstable and will usually fall on a debutante, causing crying and embarrassment. So, dump the contents of the chicken finger tray into your pockets and then ladle some honey mustard sauce into your underpants because we’re getting pretty drunk at this point. Now flee.

After consuming all your culinary booty and making sure to dump your underpants in the fountain, proceed to the dance floor because who gives a shit at this point. On the way, be sure to drink the forsaken cocktails left, no doubt, by the local Yale boy. Unfortunately, he has been drinking Tab and when you finally see him on the dance floor (after explaining to the bartender that your “friends” now want three white Russians) make sure to punch him. This will cause a rain of contemptuous venom from the mouths of the onlookers, but by the time they figure out it was you who has taken up the role of drunken pugilist, you have already switched gears and taken up the role of guest vocalist for Bobby Sluttypants and The Groovebunnies because that is what they are always called. As you rip through a stirring rendition of “Highway to Hell,” the debutantes are swooning for you. They all want you. Trust me, they ALL want you. Unfortunately the band was playing “Wind Beneath My Wings” and the applause has died down because the band can’t get their act together.

“It’s AC/DC, not Bette Midler, you assholes!” you scream to no avail as the security guard is forced to slide you and your oozing carcass off the stage.

At this point, just to make sure you haven’t left any loose ends, it is advisable to fall over and rip off one of the debutantes’ dresses on purpose. This will get you out of the party more quickly that you can imagine. But in the end, one always leaves in amity, for it is a joyous occasion. A beautiful southern belle has been presented to society; many connections are made, smiles thrown, spirits drunk, punches thrown…perhaps you will not always leave in amity, though. We will call it a fragile armistice. And the ice sculpture never had better.