Alcohol is much more than a sure cure for sobriety.

Cast a gaze back into the mists of history and you’ll see wine, beer and spirits doing duty as wages, currency, medicine, tithes, and offerings to whichever deity was in charge at the time.

It was also used as a weapon. Throughout humanity’s slow crawl to the present, soldiers and strategists have sharpened up their wine flasks, stockpiled their shot glasses, and generally uncorked bottles of hundred-proof whoop-ass on their opponents. The stratagems ranged from crude to clever.

At the crude end of the spectrum we find the great Persian general and king Artaxerxes. In 402 BC, his brother, Cyrus the Younger, rebelled against his authority, and carved a bloody swath through Greece and Mesopotamia, generally kicking the crap out of Artaxerxes’s far larger army, until Artaxerxes had had quite enough. Professing a desire to talk terms of surrender, Artaxerxes erected a massive silk pavilion near the battlefield of Cunaxa (near modern Baghdad), and invited his brother and the rest of the Greek generals over for parlay. When the men were assembled, Artaxerxes offered wine to the Greeks. While the Greeks drank their fill (they simply couldn’t say ‘no’ to fine Persian vino) Artaxerxes explained his plans for settling the war: he would give the Greeks everything they wanted. Needless to say, the terms made the Greeks very happy. So happy they decided they should celebrate with more wine. A lot more wine. When the Greek generals were good and sloshed, Artaxerxes and his generals drew their weapons and bummed out the whole party by massacring the lot of them.

A bit ham-fisted, perhaps, but effective.

The Greek army was left leaderless and trapped deep in enemy territory. And, if you can imagine, things were about to get worse. 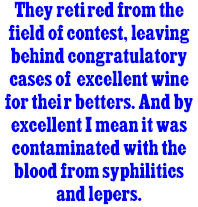 In need of a leader, the Greeks elected   Xenophon the Almost Great from the ranks of the hoplites. Xenophon didn’t exactly start off his new generalship with a bang. He lead what remained of the Greek army on a wildly-disorganized retreat back through lands they had so recently conquered, harried the whole way by Persians soldiers and angry villagers interested in getting a little payback. Eventually, the army made it back to friendly Greek territory, camping near the city of Colchis, in an area replete with fresh water, forage, and, best of all, an abundance of wild honey that seemed a gift from Olympus itself.

To ancient peoples around the Mediterranean, honey combs were a delicacy, a sweet treat better than Swiss chocolate. The exhausted and defeated Greek troops fell on the honey combs like a hobo on a ham sandwich. A short while later Xenophon stepped out of his tent to find his army in chaos. All around him, soldiers acted like madmen. Some staggered and stumbled about, dazed, while others wailed and screamed, jumped in the river, climbed trees, attempted to ride goats, dueled with invisible foes, and sang gibberish. All of which would’ve been bad enough, but the whole scene was made worse by the fact that most of the men had also lost complete control of their bowels. Yeesh.

Xenophon immediately broke camp and continued the journey back to Athens, but he was now hampered by several thousand desperately ill soldiers, who were easy picking for the advancing Persians. He lost thousands of men before the affliction ran its course and the troops were safely ensconced back home. Years later, Xenophon wrote a book on the war. In one of history’s great examples of understatement, he wrote   of   the sickness, “great despondency prevailed.”   Do you think?

Xenophon’s army was victimized by toxic wild honey. Known around the Caucuses as deli bal (mad honey) and by modern Westerners as miel fou, the toxin occurs naturally when honey bees get nectar from poisonous rhododendron flowers. In small quantities, mixed, as people have done for centuries, in beer, wine or milk, it is mildly psychotropic and provides a quick pick-me-up. In the 18th Century, deli bal was a major export from the Crimea. Tons of it was sent to Europe where it was used in taverns as an additive to give ale and wine an extra kick. Xenophon’s troops were overdosed with the dangerous substance accidentally, but its military potential would not go unnoticed for long.

In the decades leading up to Julius Caesar’s ascendancy, as Rome was expanding from republic to empire, the mightiest enemy facing the Italian peninsula was the philosopher king Mithridates of Pontus. His massive army had conquered the sum of Asia Minor and Greece, and was poised to invade Italy. Saving the nascent Roman Republic was charged to legendary general Pompey the Great.

Mithridates was a deeply paranoid man. Chief among his fears was being poisoned. His fear was so acute that he engaged in preemptive strikes against those he feared might slip something deadly in his wine, assassinating, via poison, his mother, father, two wives and four sons. To protect himself he poisoned his own wine a little each day with one of several poisons, building up a tolerance as he went. He experimented with many poisons, and one of his favorites was deli bal.

In 65 BC, Mithridates led Pompey the Great on a merry chase around the northern end of the Italian mainland. Pompey suffered under the delusion that Mithridates was in full retreat and marched his legionaries day and night in pursuit. As days became weeks, Pompey’s troops began to notice wine jugs placed in conspicuous positions along the streets of deserted villages. Roman troops loved wine, and took heart from the erroneous assumption that Mithridates’s men were running away so quickly they’d left their’s behind.

Naturally, they decided to drink it. Free wine is free wine, right?

Pompey the Great let his crack legionnaires suck down the wine; he was a groovy commander, that’s why the troops liked him so much.

He let them snack on the sacks of honey combs they found with the wine, too. I mean, why not? Pretzels hadn’t been invented yet. When they had their fill he marched them to, of all places, the Greek town of Colchis (Apparently, he hadn’t read Xenophon’s book).

The wine and honeycombs were spiked with deli bal, of course, and it wasn’t long before the tight ranks dissolved into a mob of crazies, running willy-nilly about the countryside puking on each other and soiling their armor.

Mithridates had some friends up around Colchis. They were called the Heptakometes, and were known in Rome as the worst sort of savages. Calling them names didn’t save Pompey’s army, however, when a hundred or so Heptakometes—a mere handful of men, compared to Pompey’s legions—walked into the Roman camp, in broad daylight, and systematically slaughtered over 3000 of Rome’s best soldiers. Pompey managed to escape, but had some ‘splaining to do when he got back to Rome.

Around the same time, across the Mediterranean on the northern tip of Africa, in the city and region known as Carthage, a pair of commanders were earning attention for similar (s)winish military tactics. Their names were Himlico and Maharbal. Working together, they defeated a much larger force of Libyans by retreating and leaving gallons of tainted wine in their wake. This time, however, the poison of choice was mandragora, or mandrake, an extremely nasty member of the deadly nightshade family. The Carthaginian generals hid their troops from the partying Libyans and waited for the polluted wine to reap its deadly harvest. When the Libyans finally succumbed to the vomiting and spasms caused by the mandrake, the Carthaginian soldiers waltzed in and whacked the entire Libyan host without breaking a sweat. Himlico and Maharbal returned to Carthage heroes and celebrated with many jugs of poison-free wine, each toasting the other’s ingenuity.

Julius Caesar, when he was a young soldier, managed to get himself captured by Cilician pirates off the coast of what is now Turkey. Just before the pirates sailed him to the waters off the Roman city of Miletus to demand a hefty ransom, Caesar managed to send a secret message to his Milesian allies. In it he instructed them to bring twice the demanded ransom, as well as two wine vats. But not just regular wine vats, no, he special-ordered one spiked with mandrake and the other with swords.

The fact that Caesar went on to become the first emperor of the Roman Empire and one of the most influential figures in all of recorded history testifies to how things went for the Cilician pirates.

As a military tactic, poisoning the enemy’s hooch continued across the globe and throughout history. Saxons whipped up on Celts after feeding them tainted mead, and the Celts returned the favor, and sticking it to the Saxons (with spears) after getting them good and debilitated on wine infused with hellebore. In 946 AD, Olga of Kiev served up her Russian foes several tons of mead contaminated by deli bal. Five thousand Russian soldiers were slaughtered in their beds. In 1489 the Russian army defeated an army of Tartars by leaving behind thousands of gallons of mead. To their credit, no poison was used. They didn’t need any. The Tartars got so blitzed on the mead that the Russians were able to kill or capture 10,000 of them. In 1495, the Spanish and the French were duking it out at the battle of Naples, when things started going badly for the Spaniards. They retired from the field of contest, leaving behind congratulatory cases of excellent wine for their betters. And by excellent I mean it was contaminated with the blood from syphilitics and lepers. Egad.

We could go on and on in this vein, with example after example, but it’s all getting rather depressing, don’t you think?

With very few exceptions, society has a whole has taken a very dark view of   these sort of tactics. It was considered sneaky and lacking in chivalry. There was no honor whatsoever in besotting your enemy and killing him while he lay enfeebled in his sick bed. In many ancient cultures, once someone had partaken of your liquor he was considered to be your guest and thus quite safe from molestation. To offer someone wine and then, when he was intoxicated, to remove his head, was a major offense, one that outraged the gods, and might cause them to smite you with some sort of heavy-duty curse. In short, tampering with the other guy’s hooch was considered extremely bad form.

And it still is. If you’ve ever had your drink spiked, you have an inkling of how all those soldiers must have felt when something as good and right as wine turned on them. The only upside is these days you’re more likely to end up with a headache, rather than headless.
—Rich English

(Note: The Author is indebted to the works of Adrienne Mayor, Julius Caesar, Xenophon, Henry Thompson Rowell, and F.R. Cowell)