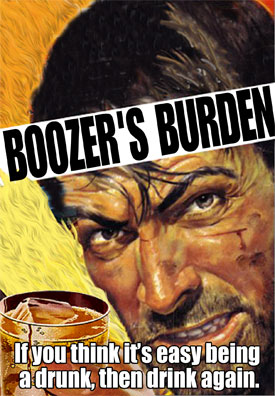 “You should be very careful when drinking. It is very easy to become an alcoholic.”

Variations on that theme seem to endlessly echo through a drinker’s life, solemnly delivered by medical groups, government agencies, family members, friends and most notoriously, MADD. Alcoholism, they will assure you, is always the slightest missteps away.

I feel it my duty, however, to inform you that their claims are entirely false. Being an alcoholic is by no means an easy thing. Rather, it is quite the opposite. Sure, it’s easy to have an occasional drink or two, but the difficulties involved with becoming the kind of alcoholic people want to write books about are massive and manifold.

I know this because I have been attempting to become an alcoholic for years and am continuously thwarted. If it were easy, every one of my friends would be an alcoholic. Sadly, the high art of alcoholism is only practiced by an a extremely select group, often found in the upper or lower echelons of society.

“But,” you may be asking, “what could be so hard about becoming an alcoholic?”

Well, for starters, alcohol isn’t free. It isn’t even reasonable. Thanks to myriad taxes and tariffs, it is obscenely expensive.

I dream of a land where alcohol flows from fountains, is supplied directly to my kitchen by the city, and is used to fill swimming pools. But I exist in a land where I pay dearly for something which is such a vital part of our history and culture that it should be subsidized by the government and sold at the same price as tap water.

It is such a sad state of affairs that, much to my growing horror, I have to slave at some sort of job to procure the liquid my body needs to operate properly. And I tell you, I have tried everything. I even attempted panhandling once, quickly learning that when you are blotto it’s difficult to shame “bus fare” from uptight businessmen. I considered using a sign—the classic jest, “Will Work For Beer”— but became possessed by the deep-seated fear that someone might actually want me to work for the beer.

I settled upon a freelance style of labor, which, while it does offer a host of opportunities to partake in a tasty beverage, it has also opened up a whole new world of problems.

Since I am my own boss, I can no longer call in sick. Calling in sick to yourself may seem amusing at first, but it is notoriously difficult to fool the guy on the other end of the line. Instead I find myself constantly stumped for an excuse to blow off a meeting with a client. Even when I decide that I absolutely must attend a meeting, the firms I work for are so pompous and twisted they seem to think the workday starts before noon. I never dreamt my lifestyle would clash so greatly with the people I’m, bless my soul, trying to help out.

For a time I resolved to only schedule afternoon appointments. This scheme quickly unraveled when I came to the realization I would be spending happy hour in a shirt and tie instead of peacefully idling on a barstool, enjoying a bargain pint. My next idea was to schedule only morning appointments. This strategy collapsed when I realized that the joyous nature of happy hour tended to catapult me into drinkfest that usually tapered off roughly two hours before my first meeting.

Do you see what I’m getting at? If people want to go around bragging about how easy it is to become an alcoholic, they should at least try to make it a little easier. I mean, if I felt the powerful need to tell people that chalkboards are extremely dangerous, I’d feel it was my duty to invent one that was dangerous.

But I’d never go around spouting that nonsense. Chalkboards are very helpful to society as a whole, and so is alcohol. One need only examine the rich history of drunkards and what they have accomplished, to wonder why society doesn’t aggressively encourage alcoholism. I won’t pester you with the endless list of great men and women who chose to spend their time deep in the bottle, as I know you have heard it many times before. Just keep in mind that most of the greatest authors, artists, poets, actors, politicians, waste management employees, singers, judges, and yes, taxi drivers, if asked to fill out a survey, would list their location as “three sheets to the wind.”

So who is to blame for this terrible misunderstanding and the subsequent slander of those of us who are laboring mightily, against great odds, to become alcoholics? I could point ten fingers at once, but that would put me at risk of dropping my drink. Naturally there are certain “organizations” to blame for this fault, but I won’t bother getting MADD at anyone in particular.

Being an alcoholic, a pure drunkard, is more challenging than any job you have ever tried, and is not for the weak at heart. Or stomach. There have been mornings, just days into a proper bender, when I awoke so queasy that I didn’t want any part of what was left of my brilliant, late-night vodka/soy sauce combination lingering on my nightstand like a gravely wounded soldier. Getting that thing down was like riding a barrel up Niagara Falls. And the ensuing ride back down was no jaunt through a meadow either.

It takes more dedication, in fact, than being President—when was the last time you heard about Bush pounding on acquaintance’s doors at three in the morning, loudly demanding foreign policy advice? It is more difficult on the nerves than being a mall Santa, although some extraordinary men are capable of being both.

While the fallen can reach their goal in Twelve Steps, it takes many more very large steps and any number of blind leaps to attain true alcoholism. Even writing this treatise has disturbed my journey toward greatness.

So have another round, don’t fret that tiny misstep, and don’t let “the man” get you down. Next time someone tells you to watch what you drink, because you could easily become an alcoholic, politely ask them to prove it. Inform them you are a weak man and need a great deal of help toward reaching that goal, and a couple good bottles of scotch would be a good start.