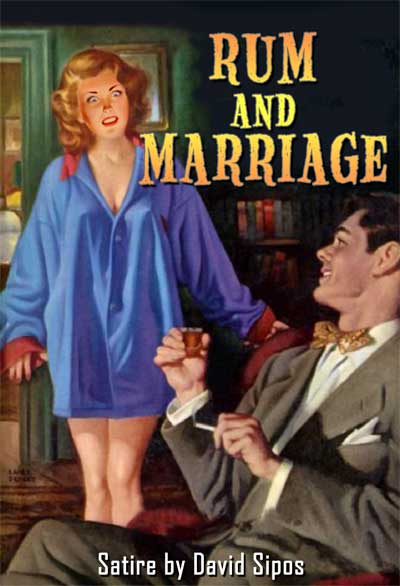 Walking up the dirt road, Mark realized that he would never walk up this road in the same way.

He would never drink a drink in the same way. He would never look in the mirror and see the same man. Because tomorrow, Mark would be married. And a part of him was dying. Dying the slow and agonizing death of a badger caught in a steel trap. Chewing off his own arm. He would be half a man. For the rest of his life, Mark would reach for something with both arms, only to be reminded that he had but one. He hoped he wouldn’t spill things all the time. Then, he remembered. He was only losing an arm in the figurative sense. He took a drink from the pint bottle of rum he carried in his jacket. It is good to drink tonight, he thought.

Mark heard the shuffle of sandaled feet on the road ahead of him. He looked up. He could see a figure approaching. It was one of the islanders. As the man neared, he greeted Mark. Mark recognized him as Santos and stopped to talk with him.

Mark loved to talk with the islanders. He wished he understood Spanish. Then he wouldn’t have to have the same conversation with them every day. But now, he thought, the conversation wouldn’t be the same. A man talks differently when he is married. A man talks differently when he is missing an arm. Mark drank from the bottle of rum. It is good to drink tonight, he thought.

Gina sat in the window looking out at the black night. Mark is out there somewhere, she thought, probably drinking and looking for trouble. No, not trouble. Mark is a man. He doesn’t need to prove it anymore. She laid down the shotgun she had been cleaning and went into the kitchen. After pouring herself a cup of tea, she sat down at the breakfast table. She looked around at the reworked cabinets, the new wallpaper, the new ceiling, the new floor. Gina and Mark had redone this kitchen with their own two hands. We built this kitchen, Gina thought, we built this kitchen on rock and roll. Gina often confused song lyrics with her real existence. She heard a noise from outside on the street. She went to the window and looked outside. In the street was Santos, one of Mark’s island friends. Gina called to him.

Gina loved to talk with the islanders. Unlike Mark, she learned to speak Spanish, even though he had been on the island longer than she had. The islanders respected her for learning their language.

As a symbol of their respect, they had given Gina a tattoo. They had shown their respect last night. The tattoo itched as she thought this. Gina crossed the room to the mirror and looked at the tattoo on her shoulder. The men of Santos’ village had told her it was a castrated bull. Gina was not fooled. She knew a cow when she saw one. She also knew that she would go out and look for Mark tonight. And that he would hate her for it. And love her. She fingered the scabby cow on her shoulder.

Mark lifted the glass of rum to his lips and drained it. The rum burned with the raw pain of a bladder infection. He loved that feeling. He turned and leaned back on the wood plank that served as the bar in the El Tombre del Buncio. The El Tombre del Buncio was a narrow, dirty shack crawling with vermin and stinking of stale beer. It was crowded with people, mostly islanders, with a few tourists who were either brave or stupid enough to come into this part of town after dark. A haze of smoke hung over their heads. This place needs a no-smoking section, Mark thought. Then, he remembered. What does a man with one arm care about secondary smoke? He turned and leaned on the bar, his face in his hands.

After a few moments, Mark looked up. What I need, he thought, is someone to talk to. He saw the bartender standing alone at the end of the bar. He was spit-shining glassware. Mark signaled to him. The bartender walked over and stood in front of Mark. Mark looked up at him.

Damn it, Mark thought as the bartender walked back to the end of the bar. Mark looked at the man standing next to him. He was a short, heavy-set man of perhaps fifty. He was a tourist. He held his glass of rum in his left hand, the hand closest to Mark. Mark saw that the man wore a wedding band. Good, Mark thought, someone who can speak to me of marriage.

He tapped the man on the shoulder. The man turned his head to face Mark. He wore mirrored sunglasses. Mark looked at his reflection in the lenses.

Good, Mark thought, someone who can speak to me of marriage in English.

“It is the most beautiful I have seen.”

“What do you think of the rum?”

“It burns like a bladder infection, but I love that.”

“Me, too. How do you think the Browns did in the draft this year?”

The man looked at Mark and smiled.

“You do not wish to speak to me of football or rum. You are troubled because you are not sure why you are to be married.”

Mark stared back at the man.

“I can see it in your eyes. A man only looks that way for one reason. About marriage. I can only tell you this. I have gotten drunk with men. I have killed a bull with men. I have even killed another man. But it was only a woman that made me become a man.” He drained his glass of rum. “That is why you are getting married.”

Mark smiled at the man. “That is good news. Thank you for talking with me.”

Mark held out his hand to shake with the man. As the man turned to face him, Mark dropped his hand down to his side and turned back to the bar.

The man had but one arm.

Gina sat in her jeep outside the El Tombre del Buncio. She stared at the neon sign, its garish light giving her skin the sick yellow glow of a hepatitis patient. El Tombre del Buncio, the sign flashed. The Home of the Whopper. Two drunken islanders staggered out of the open doorway beneath the sign and made their way up the street, slurring a rendition of “My Way.” Beer drinkers, she thought, and hell raisers. She looked at her watch. Nine o’clock. Mark should be good and drunk by now.

As she neared the doorway, a man stepped out of the shadows and blocked her path. A one-armed man. Gina scratched at her tattoo. The man spoke to her.

“It is a beautiful night, don’t you agree?”

“That is an interesting tattoo.”

“Mark is inside. He is drunk.”

“I know he’s drunk,” Gina said. “He gets a buzz faster than a Mormon on a coffee break.”

“It is good that you came here tonight.”

“I don’t need your approval.”

“I told him that it was only you, a woman, that could make him become a man.”

“Look, Mark doesn’t have to prove that he is a man. He loves me. That is enough. I don’t need any help from you, old man, so why don’t you just get out of here.”

The man hung his head and walked off into the darkness. I don’t know why my father has to interfere, Gina thought and walked into the bar.

Gina stood inside the doorway and looked around the room. It reeked of unwashed bodies and cheap cologne. I wish Mark would wear the scent I bought him for Christmas, Gina thought. She saw Mark standing at the bar ordering another glass of rum. He was drunk. For a moment Gina wondered if she was doing the right thing. Then a wave of emotion coursed through her body. She looked around the room. This is not my beautiful house, she thought. She watched Mark drain the glass of rum. Same as it ever was, Gina thought, same as it ever was.

A little too much rum, Mark thought. He looked at his hands.

Mark shook his head violently, slapped himself twice, punched himself in the stomach, and stepped on his own foot. Snap out of it, he thought. So what if the man had but one arm. He was happy, wasn’t he? Maybe a man doesn’t lose an arm when he marries, but gains one. Yes. That’s right. A man gains an arm. An arm of support. An arm to catch you when you fall. An arm to hold you when you feel bad. An arm to love you, as only a woman’s arm can love a man. Nah, thought Mark, but it is better than thinking about losing an arm. He drank the last of his rum. I’m going home, he thought. He turned to leave. Gina stood behind him, blocking his way.

“What are you doing here?”

He hugged her close.

“The world is ours,” Mark said. “Let’s go have children.”

“I wish you’d cut that shit out,” Mark said.