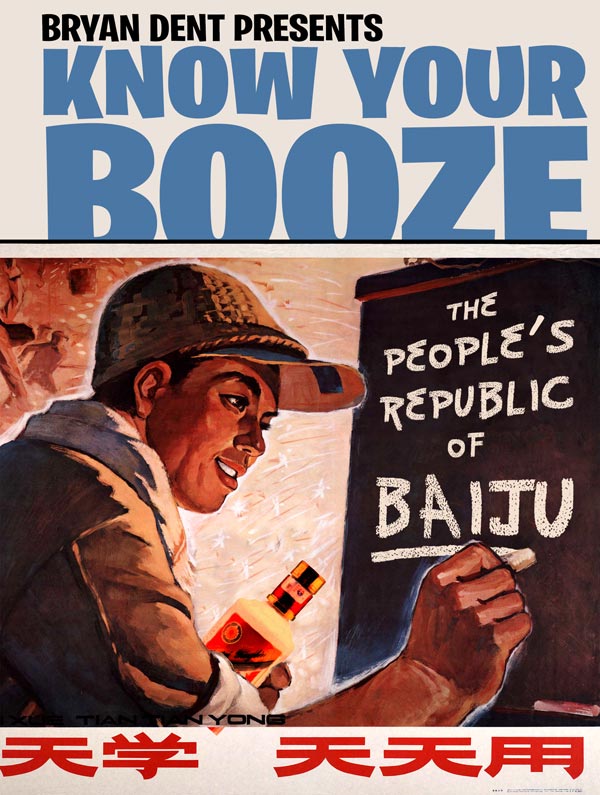 The world’s best-selling booze is a Chinese spirit called baijiu.

Not because people around the world are clamoring to buy it—most non-Chinese who’ve tried it find it disgusting—but because everyone in China, from the mightiest Communist Party bigshot to the lowliest peasant, partakes of what is the country’s national drink.

Baijiu (pronounced bye-joe) is distilled mainly from sorghum, although most of China’s 14,000 distilleries have their own secret recipes that might involve ingredients like rice or wheat. It’s potent stuff—80 proof baijiu is the feeblest available. It has a pungent smell, and the taste is definitely an acquired one.

Few Westerners have ever acquired it. A 19th-century French missionary to China said of baijiu, “One can hardly imagine what pleasure the Chinese find in imbibing these burning drinks.” Dan Rather, covering President Nixon’s visit to China in 1972, described it as “liquid razor blades.” Least impressed of all was writer Tom Scocca, who in his book about the 2008 Beijing Olympics compared its flavor to “vomit after a vodka binge.” 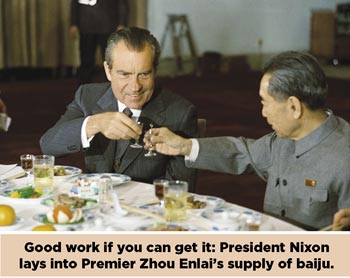 Baijiu is allegedly the world’s oldest spirit, its roots stretching deep into the ancient past. According to popular legend, thousands of years ago a man named Du Kang stored a sack of cooked sorghum seeds in a hollow stump for safekeeping over the winter. Returning to his trove next spring, Kang was surprised and delighted to find that the seeds had fermented. The result was “yellow wine,” which the Chinese later learned to distill into baijiu— “white liquor,” also nicknamed “firewater.”

Cut off from each other by China’s vast distances and rugged terrain, backwater hamlets developed their own methods of distillation and baijiu recipes. Many modern producers still follow these ancient practices today, fermenting the product in stone jars or mud pits and using primitive stills. Modern baijiu is an endless variety in taste and quality.

Rotgut baijiu is available for about a dollar for a liter bottle, and this is what the proletariat drinks. Comrades chip in to ease the working day by sharing a bottle on lunch breaks. A Chinese phrasebook issued to GIs during World War II recommended this common baijiu as the best disinfectant for cleaning wounds.

The good stuff might be aged for decades and cost the equivalent of hundreds or thousands of dollars. Considered the best of the best is a variety called Maotai. According to Communist lore, it was Maotai that fortified the People’s Liberation Army during the Long March of the 1930s, and it has benefitted from the patronage of China’s rulers ever since.

Baijiu has traditionally been the lubricant among Chinese to seal deals of every kind, from marriage contracts to business agreements to high matters of State. All parties are expected to down multiple, thimble-sized shots as a symbol of unity. To turn one down would be seen by traditionally-minded Chinese as a sign of weakness at best, a deliberate insult at worst.

Beloved as it is in China, there’s little demand for it elsewhere in Asia, much less in the West. As China has slowly become more capitalistic, Western business visitors have been obliged to steel their resolve and endure baijiu drinking sessions in order to get things done. Few have become converts, but that hasn’t stopped the Chinese from trying to establish a baijiu beachhead in the U.S.

Baijiu arrived in America in the past decade, but it’s tough to find outside of big cities. One alternative is an Americanized version called “Byjoe,” (a play on the English pronunciation) available for order online. Byjoe is sourced from Chinese sorghum then shipped to South Carolina to be filtered and toned down (or “perfected,” as the website claims) to 80 proof.

If you’re feeling adventurous enough to give baijiu a shot, the first thing to know is that it comes in four broad styles, classified by aroma: light, rice, strong, and sauce.

Light aroma baijiu is easiest to make and thus the cheapest. One light brand called Erguotou is the people’s booze, the rotgut baijiu of the working class. Rice baijiu, as the name implies, is heavier on the rice than sorghum and is considered the best entry-level baijiu.

Strong and sauce are considered more complex varieties and harder for novices to get into. They’re also typically the most expensive. Famed Maotai is a sauce-aroma baijiu.

If you choose to take the baijiu plunge, you may as well drink it as the Chinese do. That means neat, at room temperature, and in half-ounce shot glass doses. If you’re drinking with others, clink glasses in a toast before drinking. When toasting, hold your glass lower as a sign of Confucian humility and respect. Shout “Ganbei!” (“Bottoms up!” more or less) before downing your shot, then tilt the glass outward to prove it’s empty.

Above all, get roaring drunk. That’s also the Chinese way, and a billion of them can’t be wrong.