I’m lying in bed with my consort of the moment, staring at the ceiling with a loud white void glaring garishly in my memory. 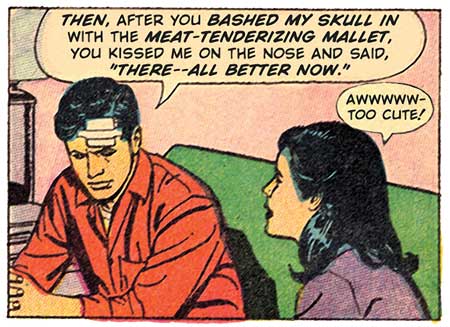 There is an immediate sensation of serious brain pain, and a kind of numb awareness that I simply don’t know whose house this is. In the following hours, I will ride some sixty miles in the backseat of an acquaintance’s car, completely horizontal in a borrowed blue dress, feeling so ill that I’m all but certain my life will never be normal again. This hangover is terminal. This is how it feels to walk the last lap of life. It’s feeding tubes and death sweat all the way down.

There is an excruciating wait in the line of an Arby’s drive-thru, where I order grapes, and eat two. The sky is gray, the world is cold, the snow is piled on the roadsides, black and ugly. My girlfriend and I will later become aware of the existence of a photograph of us laying in the bathroom of that stranger’s house, fully clothed and apparently dead, with an albino ferret on the floor beside us in the corner of the frame.

Such periods of true darkness, when we are forced to Sherlock Holmes our own lives due to the fact that we, for some brief time, weren’t around for them, are not uncommon to the drinker, be they a devotee of the lifestyle, or merely a weekender. The blackout is the great equalizer—all are susceptible to the strike of its hammer. It is, truly, society’s only tolerated form of public insanity, and that barely.

But is a blackout not written into the social contract? This is the give and take of the market, mon frère. Who doesn’t have an aunt who’s gone absolutely apeshit on Bud Light and Moscato and tried to flash some minors on New Year’s? Have you ever held a friend’s hair? You need to hold a friend’s hair. Or at least sit in with them while they purge into the porcelain and mutter apologies, a viscous mingling of drool and teardrops dribbling off their chin onto their clothes, ignored. This is a position of love, trust, and high honor, for a friend in need is a friend indeed. And we’ve all, at least, been a friend in need.

It is the unluckiest of us that remember our more devilish nights in every vivid detail. Usually, by the time we get this shitty, we are blessed with the remedy of amnesia. Our friends will tell us that we threw a punch, and we will recall aching knuckles—but no more. Only snapshots remain, along with the nagging inability to reconcile them with what little we can recall of the night. The image of ourselves spraying hot bourbon out of our mouths all over a bouncer, the floor, the sidewalk, the inside and outside of a car… when did that happen?

That’s odd, we think, regarding the industrial-sized bag of Flaming Hot Cheetos, curled up next to us on our pillows like a dead animal, all accusatory and sad in the ugly light of dawn. And that’s crazy, we continue, realizing that the clothes we came home in last night don’t belong to us and don’t fit. “And Jesus Christ,” we moan aloud, on discovering that our entire bodies, from soles to scalps, are covered in grass and canola oil.

We are the truly blessed ones. We made it out without remembering.

Not that there isn’t a more sinister darkness inherent to the blackout—physically, mentally, morally. I would be remiss if I simply praised getting blotto without regard for the potential results which, let’s not kid ourselves, can easily end up fucking fatal. Or worse. We should not forget that the blackout is a weapon, for more predatory kinds. Blackouts have caused Bad Things, owing to their chaotic nature, and I do not endorse Bad Things. I don’t necessarily endorse blackouts. But I do yet see a twisted kind of beauty in their essence, philosophically. The idea of truly escaping oneself … a self-imposed waking sleep … a trust fall into the tendrils of the world.

And it is through those we trust that we manage to survive our nastiest nights. (Have you ever gotten blackout drunk at a party where you didn’t know anybody? Because it isn’t fun. I lost a phone, some shoes, my dignity, and a fight.) For those of us who do this often, we trade blackouts like a currency. Social capital. You can vomit on my floor, but it buys me dinner and a six-pack.

Let’s take one recent, illustrative example. Let us dissect a common blackout. We’ll go ahead and say this only happened for the sake of this article. For tax purposes. 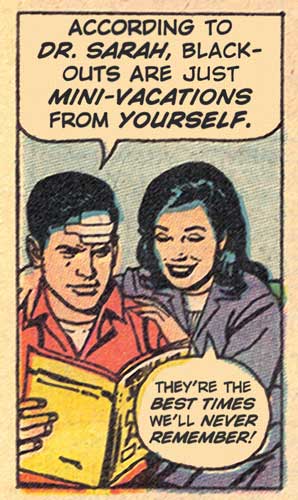 Case Study: Sarah Sz’s Subjective Chronology of a Night
It was Tuesday evening, so I settled in early. I rewatched The Wire—always fun, particularly since I have a habit of going shot-for-shot with boozehounds on TV. It’s Pavlovian. I started dinner, made hella Greyhounds. Hell, I had a plan for my night! A plan which took all of five minutes and two text messages to get derailed. On urgent request, I abandoned course and hied to the bar immediately.

I then proceeded to charm this bar, dancing seductively with comely women and interesting men, speaking exclusively in witticisms, save for the times I spent singing. It was a beautiful night.

I recall some dysphoria around 1 am, at which point I seem to have teleported home. I sense anger in the murk.

The next morning—1pm. After examining my bruises from the night before, I encountered my roommate, sitting tense, exuding violence.

“Did I see you last night…?” I coyly ventured, eyes runny, bloodshot, ain’t I a stinker.

And then he tells me some bullshit about a fire.

Case Study: The Sober Perspective
Well, this was a surprise. Also, an opportunity. I needed to know the truth of my night. Here, for the first time ever, I had a captive witness. An angry one. And boy, did he have some rude truth to drop on me.

“After waiting tables for seven hours, I came home to our building, hearing the distant sounds of the fire alarm from our top floor apartment. Upon entering, the cat was nowhere to be found, and the apartment was filled with smoke. Running past the paintings, I opened the oven to find two massive, charred potatoes. Belching smoke.

“The neighbor knocked, and I answered—they said they saw smoke coming out from under the door and were wondering if everything was okay. I said, I didn’t know—my roommate wasn’t home.

“About an hour and a half later, you stumbled up the stairs, opened the door, and seemed very surprised. And then without so much as an ‘I’m sorry,’ you went to bed. And that’s the way it was. You feel good about yourself?”

“I feel nauseous and guilty. It’s the worst feeling in the world.”

“How about you put that in your article?”

At the time of this writing, I still live here. By the time that you read this—well, the odds diminish on the daily. That “social capital” bit I was noodling over—I’m in the red with no hope by now. I exist out of tolerance. Luckily, at least some of the company I keep is sloppier.

Perhaps it is best for us to consider blackouts to be spiritual adventures, like LSD. That should provide some solace for the times we wake up the next afternoon and have to face some harsh shit in a new reality. Blackouts allow us to see ourselves from outside, unvarnished, out of control. For once, we don’t have an opinion on the kind of person we might be. The sickening, amoral, monstrosities of our psyches may emerge and become common knowledge, indisputable. The whole world gains a deeper understanding of us, and it’s possible that we will never be able to look at ourselves the same way again.

Also like LSD, trip sitters are invaluable. Things go wrong without a buddy at your back.

Do you trust yourself? Have you ever considered that maybe you shouldn’t? There’s only one way to find out, so you better have good friends… Because the fact of the matter is—friendship is the beauty in the blackout. Of course it is. Without our friends, we’re in the gutters. Without our friends, we’re breaking into banks, earning fifteen years in lockup because we thought it was our house.

Cherish those strained friendships. Return favors, forgive the faults of others. Because if you’re having fun in life it all, next time it might be you who puts their fist in the wall, vomits on an innocent, or burns the house down. You don’t want enemies at times like that.

But enough worrying about that dark and dreary nonsense. We’re all friends here—let’s set our cares aside.