Actor/Comedian/Writer/Man of Leisure David Sipos explains the madness behind the method.

First taste? I was eleven years old. I was at a wedding sneak-drinking any unattended drink I could get my hands on: Seven and Sevens, Tom Collins, Manhattans, you name it, I drank it.

Was it your parent’s wedding? Are you suggesting I’m a bastard? I don’t know who was getting married, I was eleven years old and drinking swill cocktails, for crissakes. 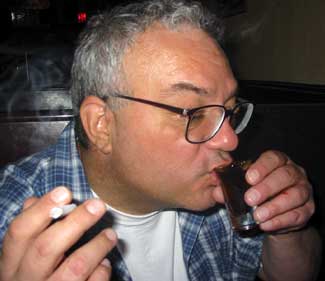 The usual? Gin and tonics, mixed at a one-to-one ratio, always with fresh ice! Sometimes I like a dash of bitters in it as well. Hemingway swore by that drink, while I mostly get sworn at.

How much is enough? I’d say eight cocktails on a working day, a lot more on a day off, because I like to get started early. It’s my day, goddammit.

Drunkest ever: I had a fight with my now ex-wife and hit the bars for twelve hours, drinking beers and double tequilas. I stumbled home, laid down on the bed and immediately began projectile vomiting. Puke covered me, it covered the bed, my wife, and the chance of me winning our earlier fight. Bless her heart, she threw me in the shower and cleaned up the whole mess. I still drink beer and tequila, but sadly there’s no wife to clean me up.

You got twenty bucks: A 1.75 liter of Canadian Mist, a sixer of Miller High Life and two packs of Camel straights.

You’ve won a comedy competition while hammered. What’s your secret? I was so drunk I couldn’t remember jokes I’d been telling for five years. But I’m a silly, cute, kind of drunk. I stammered and slurred my way through five minutes of premises with no punch lines and they must have even thought I was Foster Brooking it. The comics I was competing with wanted to lynch me. 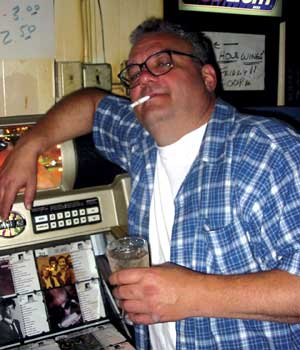 Why do comics drink so much on tour? Because we’re always working with strangers in a strange environment. The only thing you can control on the road is your buzz.

Hooching in Hollywood: I went out there thinking I wanted to write sitcoms and soon found out I wanted nothing to do with the job. Because that’s what sitcom writing is, a glorified office job in which you sit in your piss-soaked Dockers waiting to be fired because you’re not “creative” enough at recycling clichéd jokes and hackneyed situations. So I self-prescribed a “whiskey immersion” cure for myself and at the end of one year I got the fuck away from that rotten city.

Why we must drink, and why so much: Because it’s there and I have money. There is nothing like the welcoming burn of that first shot of liquor. Nothing.