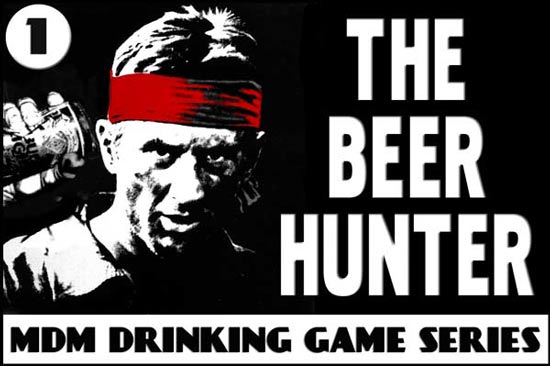 Inspired by the Russian roulette scene in the excellent Vietnam War film The Deer Hunter and popularized by a hilarious skit on Bob and Doug McKenzie’s 1982 album Great White North, for our money this is the most dramatic and enjoyable of all drinking games.

Props
Two chairs, a table, two red bandannas, and at least one six-pack of can beer.

Setting
The room should be dark except for a pool of light centered on the table. Spectators should gather in the shadows around them. Betting is encouraged.

Rules
The two players sit in chairs facing each other from across the table with red bandannas tied around their foreheads. The referee selects one of the beers and shakes the hell out of it. He then mixes it with the other beers and places all six on the table between the competitors.

From here on out it’s just like Russian Roulette. The first player selects one of the beers and holds it directly under his nostrils. While he holds it there, staring his opponent in the eyes, everyone in the room must shout, “Dau! Dau! Dau!” louder and louder, so as to build the tension. Let the sweat roll.

Finally,  the beer holder pops the top. If it explodes up his nose, he loses and is replaced by another challenger.

If it doesn’t explode, he immediately chugs the beer, still eyeballing his opponent. Then it’s the other guy’s turn. Repeat until someone gets a snootful of beer.