FKR: Ninety percent of the people who walk in here will call this a dive, but some might argue that it was and is too popular to be a proper dive. It exists in that gray area between dive and neighborhood club.

LS: I was here almost every night for five years.

FKR: When I worked here, either at the door or as a cook, this was the center of my universe. I’d work here, eat here, drink here and walk two blocks home every now and then to sleep. I met my first wife here.

LS: The amount of money I handed across that smooth wooden surface.

FKR: No matter what night of the week, there were always ten members of the gang on hand, drinking in tandem. A magnet dive. Gathered around the patio tables, shouting, smoking, throwing back wave after wave of shots, climbing that goddamn tree out there. It was a monkey zoo. The gang would expand and contract, two dozen, three dozen, people would sneak out without saying goodbye, just a vast blur of joyous insanity. It had a much more social atmosphere than most dives.

FKR: Fantastic night. True story: Jake was always talking about how he was going to put a moonshine still together. I scoffed, so on the back of 12-pack box we wrote out a very formal, barely eligible contract stating that if he didn’t have a still in operation in six months, he would have to buy me a bottle of Beam and vice versa. He lost that bet, but a short time later he was the head distiller of Stranahan’s, which kicked off the great distillery wave in Colorado. He eventually paid me with a bottle of Stranahan’s, which is a helluva lot better than Beam. He showed me.

FKR: They could be surly, but they were very fast and efficient.

LS: They had to be. Remember the $2 You-Call-It nights?

LS: It was crazy. People couldn’t control themselves. Insanity on a massive scale.

FKR: Lots of fights. Bouncing here wasn’t one of those gigs where you could doze off at the door in-between checking IDs. It was an active battleground.

LS: Wild times. We were drunk all the time in those days.

FKR: It’s amazing we got anything done. But you know, that’s what our job was. To capture the essence of Denver’s drinking spirit. And there’s only one way to properly do that.

LS: We were drinking very seriously, so to speak.

FKR: There was very little artifice. We just wrote about what we were doing.

LS: Streets has changed ownership over the years, yet here it still is.

FKR: They seem to be gearing up to be more of a music joint.

LS: There’s money in that. And who doesn’t like music?

FKR: Some of the old-timers don’t. But this was never an old-timer’s joint. It always had that younger feel.

LS: But still a dive.

FKR: Still a dive. There’s that subset of dives called a punk-rock dive. Punk rock and dive bars just go together. They come from the same place.

Next Up: Tiki Boyd’s 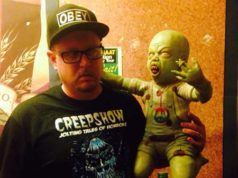