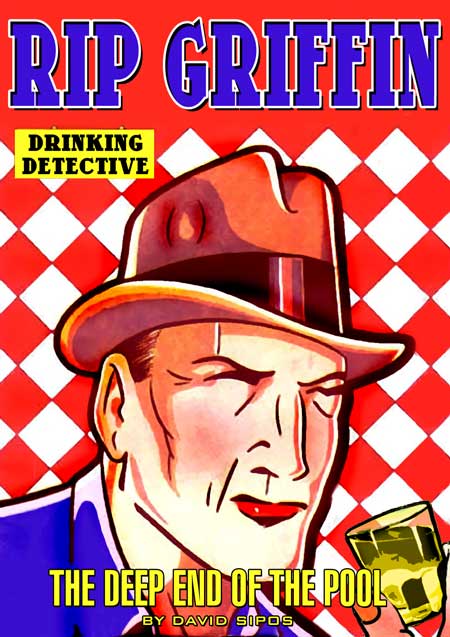 I sat on a bar stool at Club 404 sipping a High Life, tracing the scarred wood of the bar with a finger and wondering what drunk’s forehead had caused that particular gash.

My thoughts were interrupted by the knock of two heavy-bottomed shot glasses plunked down on the bar in front of me. I looked up. Jiff, the owner and chief dishwasher of the 404 gestured at me with a bottle of Ouzo, the blue neon of a Bud Light sign reflecting off his shiny bald head.

I gave him a nod. “Why is it always Ouzo? You’re not Greek.”

“I love the writings of Homer.”

“ You ever read The Odyssey ?”

“ That’s pretty deep for a guy named after a brand of peanut butter.”

Jiff poured our shots. We drank.

Jiff grinned at me and poured two more shots.

“This goombah is pressing me to use his football pools. They’re as crooked as FDR’s spine. Now he’s threatening me. Put a dollar in the jukebox and played Talking Heads’ Burning Down the House.”

“At least he’s got a sense of humor.”

Jiff shrugged. “That’s what he told me to call him.”

“Okay, I’ll ask around.” We drank the shots and I finished my High Life. I handed Jiff the empty. “Will this go on my tab?”

Jiff dropped the bottle in the trash. “Why don’t you go to hell.”

I drove my ‘65 Rambler north on Speer, over the bridge crossing I-25 and continued into a part of town known as The Highlands. In better days it was Denver’s de facto Little Italy; now it was overrun with your garden-variety yuppies crammed into over-priced two-bedroom bungalows with their Viking ranges, Sub-Zero refrigerators and vapid lives, a granite-topped island in every kitchen and a Boxter in every driveway. I drove to 38th, parked the car and walked over to Gaetano’s Italian restaurant, a Denver institution and former mob hangout. I was looking for a pal of mine, Angelo Capelli. If anyone was playing gangster and calling themselves Vito Corleone, Angie would know about it.

Angie took a slug of grappaand chased it with a sip of espresso.

“The guy’s an asshead,” said Angie. “He ain’t even Italian, he’s some jerk-off from Oklahoma City for Christ’s sake.”

“So he’s not connected?”

“Connected? What the fuck I just say? He’s a fuckin’ Okie, Jerry Tinker.”

“So why is he allowed to go around pretending he is?”

“He’s an idiot. And he draws the cops’ attention away from the real goombahs.”

Angie laughed. “Hey, Rip, I don’t care what happens to that fuck. I make sausage, you know that.”

I drank off the rest of my grappa. “Best sausage in town, too. Where can I find Jerry Tinker?”

“I heard he holds court at Don’s Mixed Drinks.”

I barked out a laugh. “You mean Don’s like Don Vito?”

Angie finished his drink. “I told ya, the guy’s an asshead.”

Don’s Mixed Drinks at 6th and Washington has been around almost as long as Gaetano’s. It’s a neighborhood bar, what people now call a dive bar, which it isn’t. It’s too clean and nice to be a dive bar and so is the clientele. But these so-called dive bars do a good business with the kids, so good for them. It was about 9:30pm when I walked in the door.

There was a pool table just inside, then a row of booths and past that the long Formica-topped bar backed by a kitschy frosted mirror engraved with snow-covered mountains. There was just a scattering of customers seated at the bar. The back of the barroom is outfitted with a jukebox, a shuffleboard table and more booths. In one of these booths sat two guys in fedoras and overcoats drinking martinis with a couple of bored-looking girls. I shook my head. Fedoras and overcoats. It was 90 degrees outside.

I walked through the room to the foursome’s booth. One guy was skinny and trailer park handsome; the other guy fat with a face like a waffle iron. Maybe somebody hit him with one. The girls were college drink-cadgers. I didn’t blame them; college and drinks are expensive. I eyeballed the Okies.

“Which one of you is Jerry Tinker?” I asked.

“Hey, dere ain’t no Tinker here,” the skinny one answered using the worst Brooklyn accent I ever heard.

“Okay, I’ll play. Which one of you is Vito Corleone?”

The skinny one piped up again. “Who wants to know?”

Both guys laughed. The skinny one elbowed the girl next to him. “You don’t want I should keep my dick private, do ya honey?”

I whipped a leather sap out of my pocket and cracked him with it. He yelped and covered his nose, blood pouring through his fingers. The girls made their way through a group of gawkers and headed for the bar.

The skinny guy pointed a bloody finger at waffle-face. The fat man started to reach into his coat and I smacked his wrist with the sap. A bone snapped and Jerry cried out. I reached into his coat, pulled out a revolver and stuck it in my waistband.

He nodded a third time.

“I hear the Sooners have good chance to win it all this year. It’d be a great time to be back in Oklahoma, don’t you think?”

Waffle-face sighed deeply and nodded his head once more.

“Good,” I said and walked back through the barroom. The two college girls stood at the bar staring at me. I stopped and threw a twenty on the bar. “Drink up,” I told them. “Dorm life stinks.”

The 404 was packed with drinkers and diners, the perfume of draft beer and grilled T-bones heavy in the air. Jiff poured us another round of Ouzo.

“I don’t think the jerk would have really burned this place down, do you, Rip?”

“Nah, he’s just a punk. But better safe than sorry.”

We drank our shots and I drained my bottle of High Life.

Jiff looked at my empty then shot me a grin. “Two dollars and 75 cents.”