Ladder-Climbin’ Lager
And if you enjoy breaking your neck, you’ll really love it. By his wife’s gleeful expression, I’m guessing his life insurance policy is paid up and substantial.

We’re Tired of Lying to You
That’s all. People don’t love it or anything, they just kinda like it. I mean, it’s okay, but it’s nothing great. This ad really depresses me. I mean, if the slick boys down in marketing can’t get excited enough to lie about the product, it must really suck. 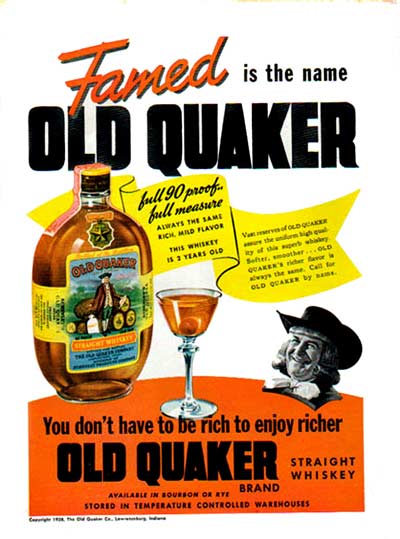 Dark Past Revealed
Doesn’t this guy push oatmeal now? Of all the mascots a whiskey company could have come up with, they chose a super-religious guy with a cleopatra cut who’s forbidden to drink. How about Bin-Laden Bourbon? Shot of Dr. Kevorkian Rum, anyone? 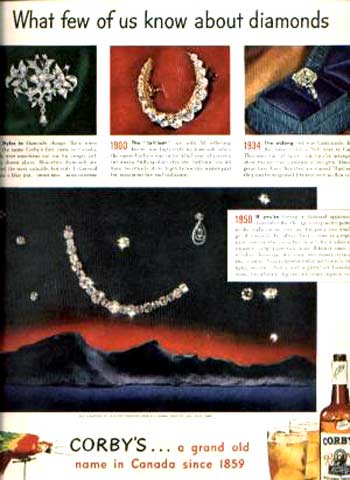 First You Get Him Good and Drunk
Okay, what the hell are we trying to sell here? Why would a Canadian whiskey ad lay out a treatise about how to buy diamond jewelry? Maybe they’re trying a sneaky backdoor tactic, insinuating to women that if they get their men hooked on Corby’s, the next thing they know the drunk bastard is forking out for a rock the size of Gibraltar. Unfortunately for the ladies, getting a man drunk on whiskey makes him want to buy just one thing—more whiskey.

Don’t Say We Didn’t Warn You
Yes, but famous for what? I don’t care if Sick is the president of the brewery’s family name, if my name was Arsenic I wouldn’t be slapping it onto jars of baby food. Try to imagine the level of cravenness this brewery’s marketing director must have sunk to: “Heck yeah! Sick’s is a great name for a beer, boss! And how ‘bout this for the motto: “Six Sick’s and you’re eighty-sicked for life! It’s a real zinger! 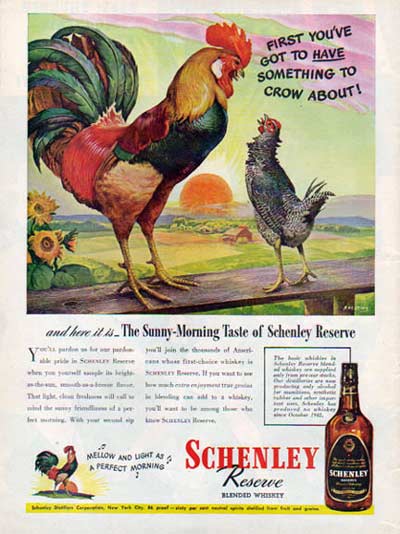 Breakfast Whiskey
Ah, yes, and what goes better with a sunrise than a couple belts of Schenley Reserve? I know the promise of a good pull of morning whiskey is more likely to get me out of bed than any crappy cup of coffee. 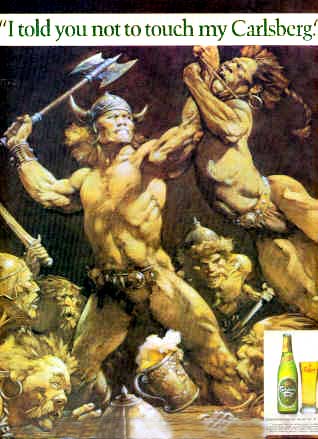 Never Steal Beer From a Viking
Especially if he’s packing his war axe. I wonder how many times defense attorneys contemplated using the “Carlsberg Defense” for their axe-murderer clients: “You see, your honor, there’s this really irresponsible ad, and my client, well, he’s a very impressionable fellow.” 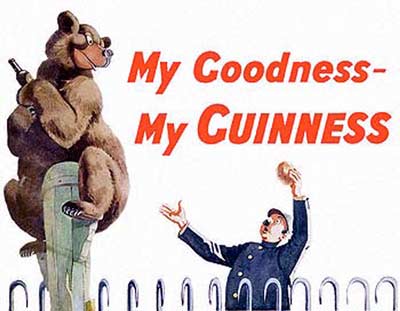 While the Brits Fret . . .
Compare this quaint British ad for Guinness with the next ad. 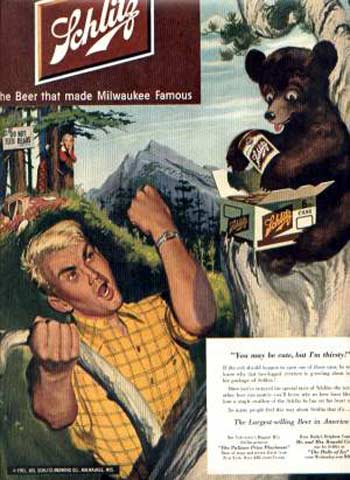 . . . the Yanks Attack!
Okay, the bear’s not as big as its Brit cousin, but the point is, goddamnit, Americans don’t take any crap from beer-thieving carnivores. Time for an early hibernation, Yogi! 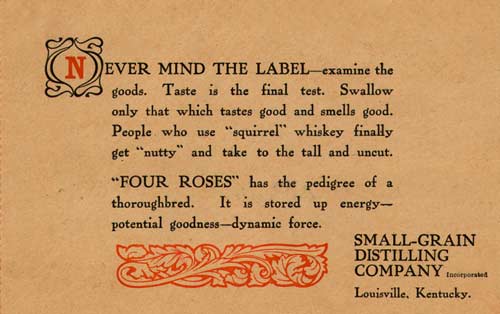 Sound Advice From 1913
I’m torn. Sure, I want some stored up energy, potential goodness and dynamic force, but the whole getting “nutty” and “taking to the tall and uncut”—as the squirrel variety of whiskeys promises—sounds kinda cool too. 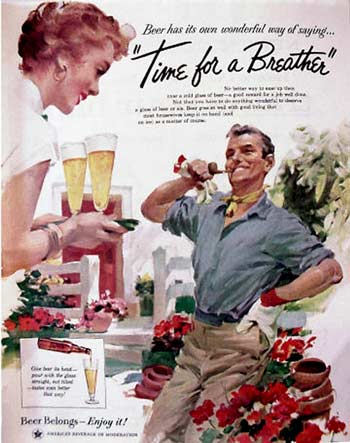 De-Sissify Your Man With Testosterone Ale
Hey, pruning a rose garden all day will emasculate the most manly of men. Get him back on the team with a cold brew! Could of chose a manlier glass, though. 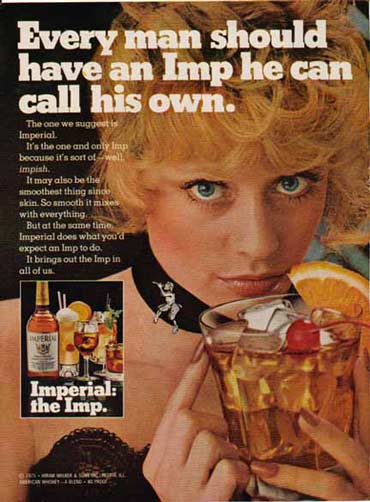 White Slavery Whiskey
You have to admire the sheer gall of a whiskey company that’s willing to insult every feminist on the planet and sneak in a salute to Satan. 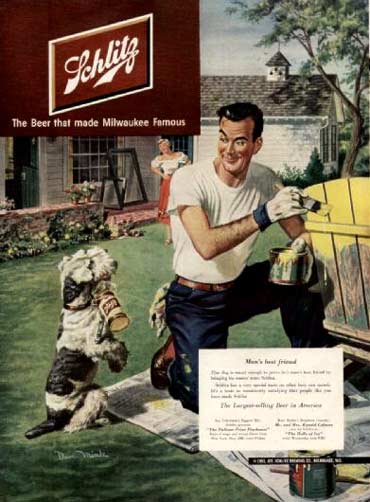 Woman Vs. Beast
The eternal struggle between dog and wife over the affections of the man of the house is perfectly demonstrated in this 1950s Schlitz ad. By the near-maniacal expression of joy on the guy’s face, Fido clearly won this round. 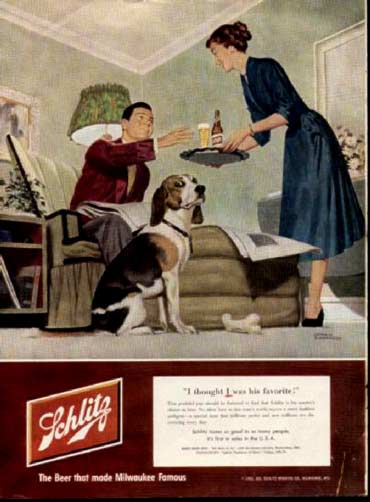 The Battle Axe Strikes Back
Not to be outdone by some mutt, the wife brings the beer with a handsome tray and glass. Fido can only sulk and absorb an awful truth: She who control’s the fridge, controls destiny. 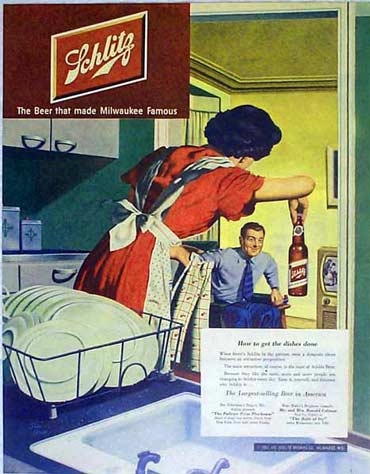 Here, boy! Come on! Come get it!
With Fido completely removed from the picture, the man is now fully under her control. Here we see the once proud male entreated into doing mundane household chores with the mere promise of a single brew. Fido! Come back! All is forgiven!