Writer, producer and star of Fox’s Invasion of the Hidden Cameras and a regular guest on the Howard Stern Show and Spy-TV, Doug Stanhope still finds time to log 40 weeks a year on the road doing stand up comedy. And get drunk. A lot. Doug explains how he juggles fame, fortune and getting royally fucked up.

Modern Drunkard: If you, early in life, decided not to ever drink, where would you be now?

Doug Stanhope: I don’t remember being early in life. But if I had to guess, I’d be doing far better on the scale of what is considered successful in this society, doing something far less appealing and with far fewer stories. It’s not whether you win or lose, it’s whether you wake up with a good story.

MD: Do you drink more when you’re winning or losing?

DS: When I’m up. When I’m down I’m more likely to brood and write and try to correct the situation.

MD: The greatest writers, actors, comics, politicians, artists, and cab drivers were—almost to the man—heavy drinkers. Why is that?

DS: I can act better when I’m drunk because it makes it easier to be full of shit. Actors are full of shit. If there is a characteristic to being a great politician, it would be empathy for humanity. When you have reached the depths and darkest places in your own soul, it’s hard not to have compassion for that in others. Alcohol brings you closer to the lowest common denominator. Artists and cab drivers are the same occupation.

MD: If it wasn’t for alcohol, half the people in America wouldn’t be getting laid. Why can’t people grasp that and revel in the essential role of alcohol?

DS: The booze wouldn’t be necessary were it not for the stigmas about sex that religious touch-holes have embedded into the culture for centuries. Why can’t people grasp and see the ugliness in Jesus? Booze does, however, overcome your fear of bad smells. So does Ecstacy. Or a clothespin.

MD: Do you get drunk before going on stage?

DS: Sometimes. There’s no signs, that’s the problem with alcohol. You have a few beers before you go on and it’ll loosen you up just enough to make it perfect, or you can drink the same the next night and it’ll fuck up your tongue just enough to make you screw up every joke. Sorry about the background noise, but I went to a bar to do the interview and I have to stand on the fucking street to smoke and drink at the same time.

DS: I don’t go to the bars in L.A. because of the smoking thing. I do most my drinking on the road, and I’m on the road 40 weeks a year. Alaska is the best drinking state. The people there, more than anywhere else, pride themselves on how much they can drink. 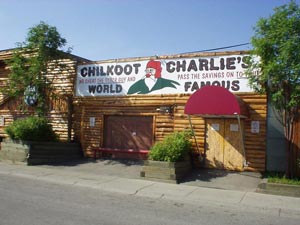 DS: Chilkoot Charlie’s in Alaska is the best. I like seedy places, a place with a jukebox and a pool table and lots of open seats at the bar, those are my types of bars.

MD: Jackie Gleason liked to say he cranked up his drinking on the road because it was like taking his home with him.

DS:  Alcohol makes it seem more interesting. Remember the episode where Homer went to a baseball game after he quit drinking? ‘Nuff said.

DS: Jagermeister is considered a wino’s drink over there. We fell for good marketing. Remember that next time some cunt gives you shit for drinking Keystone Light. Drunks are drunks. The worse the times, the less there is to do and the more they drink, be it Edinburgh, Scotland or Ardmore, Oklahoma. The more you drink the more you try to celebrate drinking, the more you try to add some false sense of romance to the fact that you’re piss-faced and can’t spell your own name.

MD: Do you remember when you started up?

DS: I was 13. Three bottles of Riunite white wine and I smoked my first cigarette. The wine knocked me on my ass and I got in trouble. It was in the local pizza place and this girl I knew in school was there with her parents and older brother. I started having a loud drunken conversation at my table about how I fucked her in a van. They called my parents.

DS:  My dad didn’t realize I was drunk. He was good like that. When I was drunk as a kid he’d come in and I’d be puking Rumple Minze all over the place and he’d go, “Ah, you have a bit of a bug, do you? You’ll have to stay home from school tomorrow.”

MD: What do you drink now?

DS: Almost every night. Every night definitely when I ‘m on the road. At least six nights a week.

MD: Who do you like to serve those drinks?

DS:  Smarminess. That’s why I don’t drink in LA. Especially the Strip. You’ll never catch me in one of those Hollywood shit holes like the Viper Room. The dickhead doormen let you in and they act like they’re doing you a huge favor.

DS: Velvet ropes. I want to hear myself talk. Even bad music is fine if I can talk over it. And I want to sit down, I don’t like to stand and drink. I like to drink with old men. They have better stories. There’s got to be a hot-looking chick in the bar, just to stare at. Even if I’m there with my wife and there’s no way I’d fuck her, if there’s one hot chick to stare at, it makes it livable.

MD: You did the show Invasion of the Hidden Cameras on Fox. Ever drink on the set?

DS:  We were shit-faced for a lot of that. Especially the New Liver episode. I went into bars in hospital pajamas and an IV on a roller. I told them I just had a liver transplant and want ed to break in the new one. I tried to get them to pour shots of tequila straight into the IV bag.

MD: Did they serve you?

DS: Oh yeah. One guy poured it right into the bag.

MD: That’s a good bartender. Was the IV plugged in?

DS: No. Needles don’t work well with me. There was another one called Drunken Paramedic. I sat in a restaurant acting like I was passed out in a booth with a walkie-talkie right next to me so the people in the next booth could hear the emergency calls coming in. They’d wake me up and I’d act drunk and try and get them to field the calls for me.

MD: You have twenty bucks and you want to get smashed.

DS:  I go to a VFW hall. I’d do an act at a club and drink free and  get twenty bucks at the end. I’m more of a distance drinker now. When you do stand up you never pay for drinks, so it blows when you have weeks off. I mean, some of that shit cost four dollars a glass.

DS: Another thing that pisses me off is when alcohol gets blamed for air rage. How much air rage is averted because someone calms down with a couple drinks? Someone who might have throttled an airline attendant or shit on the drink cart but didn’t because he had a couple scotches and calmed down.

MD: Speaking of outrages, how do you feel about the federal government blackmailing states into lowering their BACs to .08?

DS: It’s bullshit. People get DUIs because they had two beers and they know they’re fine, but because they’re so paranoid they stare in their rearview mirror. I rarely drink and drive because of the paranoia. I’m always looking in the rearview mirror and that’s what makes me swerve. I’ll hit somebody because I’m looking for cops.

MD: Does the audience ever give you hell for being drunk onstage? 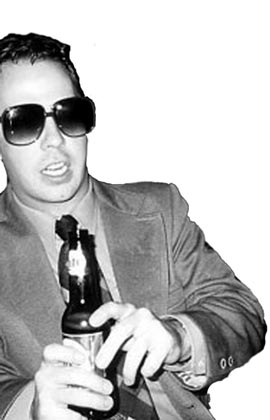 DS: I get shit anyway, even when I’m sober. Evidently, I speak like I’m drunk, I stutter and I stammer and I look half-retarded anyway. My agent gives me shit because he thinks I’m drunk even when I haven’t drank at all, which really pisses me off.

DS: Well, now, we don’t want alcohol to take all the credit when I piss an audience off.

MD: You ever get so liquored up on stage you got 86ed from the club?

DS: I haven’t been invited back to a lot of clubs because of my behavior, so that’s probably the same thing. I got very liquored up in Austin, went on stage naked and got into a lot of shit, but they brought me back. The next time I went up completely plowed and had a naked chick shave my balls. That got me permanently 86’d from the Capitol City Comedy Club in Austin. I’m probably 86’d in a few other clubs I’ll never know about.

MD: You have to test the limits. An essential part of hard drinking is seeing how far you can take it without destroying yourself.

DS: You ever drink so much your liver hurts to the touch? I used to do that as a joke, but now it actually does. It’s a case of life imitating art.  I’m afraid to take a dump for fear of passing my own liver. Fortunately for me, because of the road diet I’ve been on the last six months I don’t think I’ll be taking a shit for another year or two. There’s a long waiting list in my colon.

MD: Vomiting and taking a shit was Bukowski’s hangover cure. What’s yours?

DS: Time. There’s no such thing as a hangover cure. Time, exercise, heat. Heat is the best. Sit in your car with the windows rolled up on a hot summer day. Sweating.

MD: Do you recall your drunkest moment?

DS: Come on. That’s like asking Siskel and Ebert what’s a really good film to watch.

MD: Do you have a drinking philosophy?

DS: Life, on the large scale, sucks a dick. Like food, it’s all about the condiments. You wouldn’t eat a hamburger or a potato as is. It would suck a dick. Alcohol, drugs, Jesus, kids or hard work is no different than ketchup, mustard, sour cream and salsa. Whatever makes it suck less for you, enjoy.