Before I knew better than to trust my elders,  one of them convinced me that Ireland and Russia had no rivals as destinations for a drinking holiday.

He said the subzero cold had forced the Russians to perfect the art of warming the gullet with hard alcohol, and that the Guinness-lubricated merriment of Irish pubs made American bars look like Christian Science Reading Rooms.

What he told me was the truth, but only part of it. Ireland has a pub for every 375 people, which means that on any given evening, once the kids have been put to bed, literally 75 percent of Irish males could be “at the pub” without violating fire codes. And neither medical nor political science can explain how the Russians managed to keep the Soviet Union from crumbling for 70 years, even though the average daily consumption of vodka appears to be (as P. J. O’Rourke once said of Australians and beer) about ten and three quarters Imperial gallons for children under the age of nine. At a good Moscow traktir, if you sit down and order a cheese sandwich, you get a cheese sandwich and a shot of ice-cold vodka. 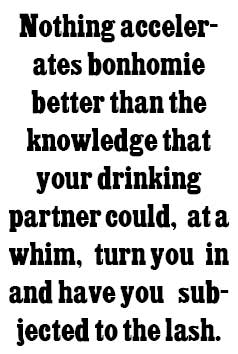 Iran, by contrast, has little on the surface to recommend it as a boozer’s paradise, other than a city in the southeast with the seductive name Shiraz. If you sit down and order a cheese sandwich and a shot of vodka in Tehran, you get a cheese sandwich and a savage beating. As soon as they seized power in 1979, the bearded Islamic overlords declared that strong drink was out, and that anyone caught boozing would be strapped down and lashed 40 times, deeper than you might imagine, across the back with a whip.

Before I left Dubai for a few months in Iran, I sucked down an extra few cocktails at Scarlett’s, my bar in Dubai, in expectation that I would have to survive on mint tea and Tang till I crossed out of the Persian desert and into the Stoli-friendly ex-Soviet lands to the north.

But paradise sometimes wears camouflage. I spent nary a week in Iran before I had my first tap on the shoulder. The tapping finger belonged to a bitter nostalgia-case in his fifties who longed for the days before the ayatollahs’ takeover, when the local idea of a good time was to sit around and get drunk on wine and poetry. Today he was offering just wine, or something akin to it. Times were tight. It was a vile rotgut concoction – a botched brandy, maybe – served out of an unlabeled glass bottle. It burned fiercely on the way down but tasted sweeter than a fine port, because its flavor was pure sin.

After that first furtive drink, the underground boozers magically appeared to me in every city, as if the old man’s booze had invested me with a second-sight, a drunkard x-ray vision that let me know with a glance and a nod who had drink and who wanted it. Almost everyone wanted it. The only people who seemed always to have access were the Armenian Christian minority, whose cousins across the Armenian border made sure, in the same spirit as the Berlin Airlift, that their kinsmen never lacked fine Armenian cognacs (or, failing that, Tuborg).

But even Muslims had their connections, and it took little searching to find a willing supplier. Where liquor stores are outlawed, everywhere is a potential liquor store. Ponder that beautiful fact for a moment: every place other than a mosque bears some possibility of being a place to get trashed. In Kerman, I visited a photocopy shop. While waiting for my copies, the attendant asked in a whisper whether I wanted beer. Still a little on edge over the whole flogging-your-back-to-ribbons thing, I said something noncommittal. He took it correctly to be an enthusiastic yes. In the back room, I bought six Efes beers (a Turkish brand) and drank two with him right then, next to the laminating machine. Try getting that quality of service at your local Kinko’s.

In other words, the booze is harder to get, but once you have it, the freedom to imbibe, without limit or shame, is greater in Iran than anywhere else on earth. Isfahan, Iran, remains the only city outside the United States where I have found myself blind-drunk at ten in the morning. There is no such thing as non-alcoholic beer in Iran. Forget AA. In Russia, one constantly hears public figures bemoaning the permanent inebriation of the populace. In Iran, no one bemoans it, because anyone disagreeable enough to care is also too much of an ass to get invited for a drink. When you twist open a bottle of whiskey, you aim to drink it, and your drinking partners are automatically winnowed down to a handful of guiltless and joyful topers.

Russian drinking friends are so easy to find that the friendships feel false; everyone with a pulse will happily share a bottle of vodka with you. But in Iran you can’t drink without being put squarely in the confidence of your drinking mates. Nothing accelerates bonhomie better than the knowledge that your drinking partner could, at a whim, turn you in and have you subjected to the lash. I drank with families (gin, straight out of a can) and with store owners (Turkish beers). And on one lovely afternoon, university students in possession of a magnum of moonshine escorted me all the way up a long, steep trail so I could enjoy the view from a mountainside overlooking Tehran, all of us as tipsy as lords.

After I returned to the US, where I suddenly felt cooped in by having to drink only in bars and in socially acceptable amounts, I read something that convinced me Westerners have been enjoying the secret drinking ways of the Iranians for centuries. In the 1830s, on Her Majesty’s service, Arthur Conolly, one of the great Oriental travelers, penetrated into remote parts of Persia when they were barely known to the West. In his memoirs he records arriving at one city and sending a note to the local Muslim prince, the hereditary grandfromage of the city, to announce his presence and his desire to forge peaceful alliances between Britain and the Islamic East. The prince replied with a note that asked only whether Conolly “possessed a substance which could make him drunk immediately.” History records no other interaction between the two. But I like to think it was just Victorian prudishness that kept Conolly from reporting what my gut tells me must have been a hell of a binge.