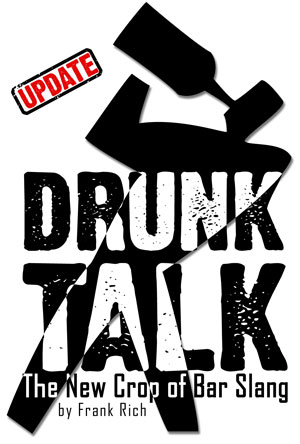 500 lb. hitchhiker a patron who is being deliberately ignored by a bartender or waitress.

bar magnet  the invisible force that makes it nearly impossible to go home after three drinks.

barfly fishing  to make incessant cell phone calls to friends insisting they join you for “a couple drinks.”

blind-man’s bluff  an aggressive threat delivered by someone helplessly drunk, i.e.: “I’m gonna whip all of your asses as soon as I climb up this barstool.”

chug-mugged to wake up after a night of drinking to discover some mysterious stranger has emptied your wallet.

dummy-sitting to watch over a drunker friend.

ducking the boomerang to accidentally walk out on a bar tab.

gangover  a shared hangover in which the afflicted gather to compete in who is the most miserable.

get the McHale out of here to exit a bar in a boisterous fashion, with or without help from a bouncer.

glass-maw not being able to handle shots of hard liquor; from the boxing term glass jaw.

harangue-over a hangover characterized by loud complaining and pessimistic speeches.

last resort bottle a bottle (usually vermouth or a sweet liqueur) that lingers long after every other drop of alcohol has been consumed; it is usually only drank during moments of dry desperation or insolvency.

micronaut a beerophile willing to try even the most suspiciously-named microbrews, i.e.: a dandelion cream  stout. Also called a micronut.

petting the bear a pointed attempt to befriend an on-duty bouncer, especially as practiced in bars where violence is common.

pretarded to show up at a party already drunk.

retrograder a drinker who behaves five years younger after every drink, right up to toddler and fetus.

ruppie Recently Unemployed Professional; a former yuppie who finds himself laid off and laid up in a bar.

shameover a hangover accompanied by an inordinate amount of guilt.

shot plots improbable schemes and adventures conspired while drunk, i.e.: “It’s agreed then. We’ll use the money from the armored car heist to party all summer in Barcelona, after which we’ll corner the Iranian bootleg market.

swimming with sharks that weird, out-of-kilter feeling you get when you’re sober and surrounded by drunks.