Most modern drunkards are undoubtedly aware of the Rat Pack, the group of entertainers who swore fealty to booze, broads and the pursuit of pleasure.

Few people, sadly, are aware of the so-called Gentlemen’s Clubs that were the Pack’s precursors. Although these groups were generally little more than secret societies that elevated drinking and debauchery to the level of religious doctrine, at least one such club essentially controlled the fates of nations and dictated the course of history.

Sir Francis Dashwood’s Hellfire Club started modestly enough as a group that met in a pub to drink and indulge in every conceivable form of revelry. When their desire for pleasure began to far exceed the day’s mores, they decided to acquire some property far from the prying eyes of the public. Sir Francis purchased a disused abbey in High Wycombe, a site that could be easily accessed from London by sailing up the Thames on a barge.

Dashwood spared no expense in turning his new property into a garden of earthly delights. A landscape artist was commissioned to design topiary shrubbery depicting obscene acts, and hedges were sculpted into huge erect penises. A series of loveseats (literally) were scattered willy-nilly about the property so couples who suddenly became aroused while taking a leisurely stroll could be assured of the most immediate gratification possible. The ground beneath the abbey was honeycombed with a series of caves that became the scene of countless orgies and unspeakable rituals. The caves were decked out lavishly with couches of silk and velvet, and the walls were festooned with tapestries and oil paintings of every conceivable sexual proclivity. Signs bearing libertine maxims and witticisms were posted throughout. The participants imbibed cocktails laced with brimstone (sulphur) and had sex with women beneath signs proclaiming, “Do what thou wilt shall be the whole of the Law,” all this a century before Aliester Crowley. 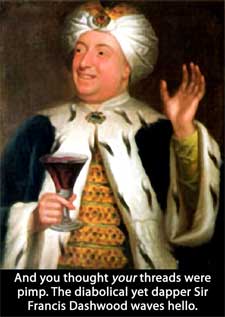 Prominent members of Parliament began to show up for the notorious late night ceremonies and even that swinging founding father Ben Franklin found time to become a member during his visit to London—all the while promoting the virtues of clean living back home.

Rumors began to circulate in the town of Wycombe about the goings-on in the Hellfire caves and abbey. The cries and moans of drunken revelry and sexual abandon issuing from the caves were interpreted as human sacrifices and it was whispered that animals set afire were seen running from cave entrances. Whether such rumors were true or not, the effect was that superstitious villagers kept their distance, leaving members of the club to pursue their vices in peace.

The Hellfire Club had by now become something of an institution. Its membership not only included leaders of the British aristocracy, but also foreign power-brokers whose combined influence impacted the entire civilized world. The club’s roots, however, were in a far more unsavory underworld, taking its inspiration from a series of Gentlemen’s Clubs that were headquartered in various London pubs and were responsible for what was essentially a sustained reign of terror. The credo of these groups were “Wine, women, song . . . and violence.” They were generally composed of libertine aristocrats who wanted to drink excessively, fuck excessively and create havoc.

And create havoc they did. When drunk they would rove the streets of London, molesting fair damsels and burning down buildings as a lark. On the infrequent occasions these “pranksters” were caught in the commission of such crimes and brought before a magistrate, their punishment would be something like a fine of 3 shillings. They were, after all, the ruling class.

Such clubs had been around since the 1600s. The most notorious at the time were the Hectors, the Nickers, and the Mims. Later, in the early 1700s, it was the Mohawks who kept Londoners in a constant state of terror with their favorite pastime—Tipping The Lion. This was euphonious for smashing someone’s nose with a huge piece of iron and gouging their eyes with thumbs. Few Londoners ventured out at night for fear of “being mohawked.”

The leaders of these groups bestowed exotic titles upon themselves, such as “Rape Master General of England” or “Patron of Blasphemy.” If their names were a frontal attack on public decency, their deeds certainly lived up to the hype. A group called the She-Romps would abduct women from the street and whisk them off to their pub, whereupon they would be made to walk on their hands until such time their dresses fell down, then have their behinds whacked with riding crops.

When the libertines tired of sex and drink, their fancy turned to pranks. Not the type of fellows to commit small pranks upon the scale of, say, exploding cigars or whoopie cushions, their idea of humor was putting old ladies in barrels and rolling them down the side of a hill. For a real laugh they’d capture a hapless homeless person and nail his hands to a shed. It’s a safe bet that at no time in history did practical jokes have as violent an edge as those practiced in 16th century England.

Each successive generation saw the coming of new groups and the fading away of old groups, and of course the younger generation wanted to take things just a bit farther. The old timers disparaged the young breed of libertines, saying the kids today were just going soft. They maintained that in their day they drank more, fucked more, and committed more daring crimes. The younger generation, for their part, turned the focus of Gentlemen’s Clubs away from raw violence and toward new levels of decadence. The last of the great clubs, such as the Mollies, the Sharps and the Sons of Violence, actually donned women’s clothing while embarking on their drunken escapades. They elevated the practical joke to a fine art and wielded insults with an inspired degree of wit and cruelty. The groups also began to incorporate black rites and the committing of blasphemies into their repertoire. Some libertines started claiming to have pacts with Satan, while still others said the devil himself presided over the soirees.

Unfortunately, the group’s dalliance with satanism proved to be their undoing, the proverbial straw that broke the camel’s back. A public that had long tolerated every excess and indignity was simply not prepared to suffer the existence of groups so stridently anti-Christian. An outcry forced the government to crack down on Gentlemen’s Clubs, and members of Parliament and the House of Lords who belonged were publically exposed and expelled from office.

The clubs, of course, didn’t disappear; they simply went underground (in the case of the Hellfire, they went literally underground, into the caves beneath the abbey) and ceased activities that would bring any unwanted attention from authorities. They continued to flourish as secret societies and no well-known rakes’ clubs existed publically again until the advent of the Rat Pack.

Though the Rat Pack was a Vegas lounge version of a Gentlemen’s Club, it did possess most of the classic characteristics. In order to attain status as a Rat, one had to be a hard drinker, a cad to women (lots of women), and a master prankster. And if at first glance the Rat Pack seems to lack the darker aspects of its predecessors, think again. Sinatra was one mean SOB, as a surly drunk stepping out of a Vegas elevator soon discovered—after calling Sinatra a scrawny little wop, Frank took him out with a single punch in the gut, then proceeded to his hotel room. If someone really pissed him off, a single phone call could arrange for persons unknown to break the offending individual’s legs.

If there is a lesson to be learned from these fragments of history, it would seem to be that western man has really forgotten how to party. Dean Martin was a drunk’s drunk. Francis Dashwood was a libertine’s libertine. Who today can hold a candle to either of them?

As we advance into the new millennium, every true rake should turn the clock back several hundred years and draw inspiration from those golden days of yore. Never do anything halfway. Moderation is half-baked and half-assed. This new century will offer us more of everything, we need but be willing to reach out and grab it with both hands. More drinks. More debauchery. More. More. More.

Ponder that as you leave your house to go to the bar. Remember the likes of Dashwood, the Sons of Violence, and the Mohawks, and tell yourself: tonight we’re going to party like it’s 1699.

Postscript: The Hellfire caves and abbey are now maintained as a historical landmark, and can be visited at High Wycombe, about an hour’s drive from London. Scandal and blasphemy had little ill effect on Francis Dashwood’s standing as a well-respected gentleman and to this day his portrait hangs in the National Portrait Gallery in London. A wooden throne which once graced the Hellfire abbey was purchased by Sammy Davis Jr.’s pal Anton LaVey, and now occupies a place of honor in his ritual chamber (wedged between Rasputin’s sled, Jane Mansfield’s grand piano and a coffin once used by murderess Susan Atkins in the Topless Witch’s Review). Along with these other relics, it constitutes a link between history’s great swingers, past and present.